[Eric’s introduction: this is the first of a two-part series from Jess Miers, a 3L at SCU and my RA, providing historical context on Trump’s anti-social media statements, including the anti-Section 230 Executive Order from last month.]

In the spirit of “there’s always a tweet,” Trump’s Twitter feed is filled with tweets that conflict with his current official anti-Section 230 and anti-free speech positions.

In 2014, Trump criticized former President Barack Obama for urging the FCC to implement stronger Net Neutrality rules. He tweeted “Obama’s attack on the internet is another top down power grab. Net Neutrality is the Fairness Doctrine. Will target conservative media.” 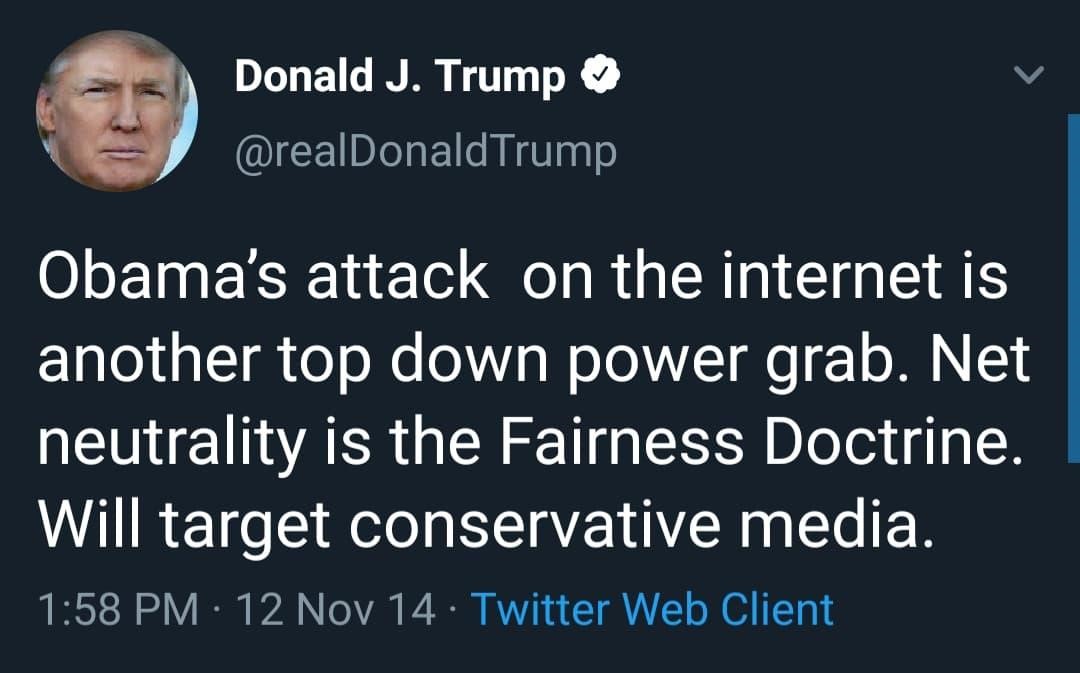 The FCC announced the Fairness Doctrine in 1949. It required TV and radio stations to allocate some of their programming for issues of public importance. Controversially, it also required TV and radio broadcasters to allow for the fair coverage of those issues. It burdened broadcasters with a duty to include opposing views and opinions in their programming.

Yet, Trump’s recent “Executive Order on Preventing Online Censorship” also reads like a modern-day Internet Fairness Doctrine. It seeks to force “large online platforms” to carry content they don’t want to carry. For example, the EO says: “As a Nation, we must foster and protect diverse viewpoints in today’s digital communications environment where all Americans can and should have a voice.” To achieve this goal, the order seeks to punish social media companies engaged in “viewpoint discrimination” by stripping away their Section 230 immunity from liability for all third-party content they host.

Bizarrely, the order also notes, “It is the policy of the United States that large online platforms, such as Twitter and Facebook, as the critical means of promoting the free flow of speech and ideas today, should not restrict protected speech.” Again, drawing upon Fairness Doctrine themes, Trump aims to obligate websites to host all types of speech.

Any attempts to enforce this duty against private companies, like Twitter and Facebook, would categorically offend the First Amendment.  But hey, Trump promised us that “nobody would fight harder for free speech.” 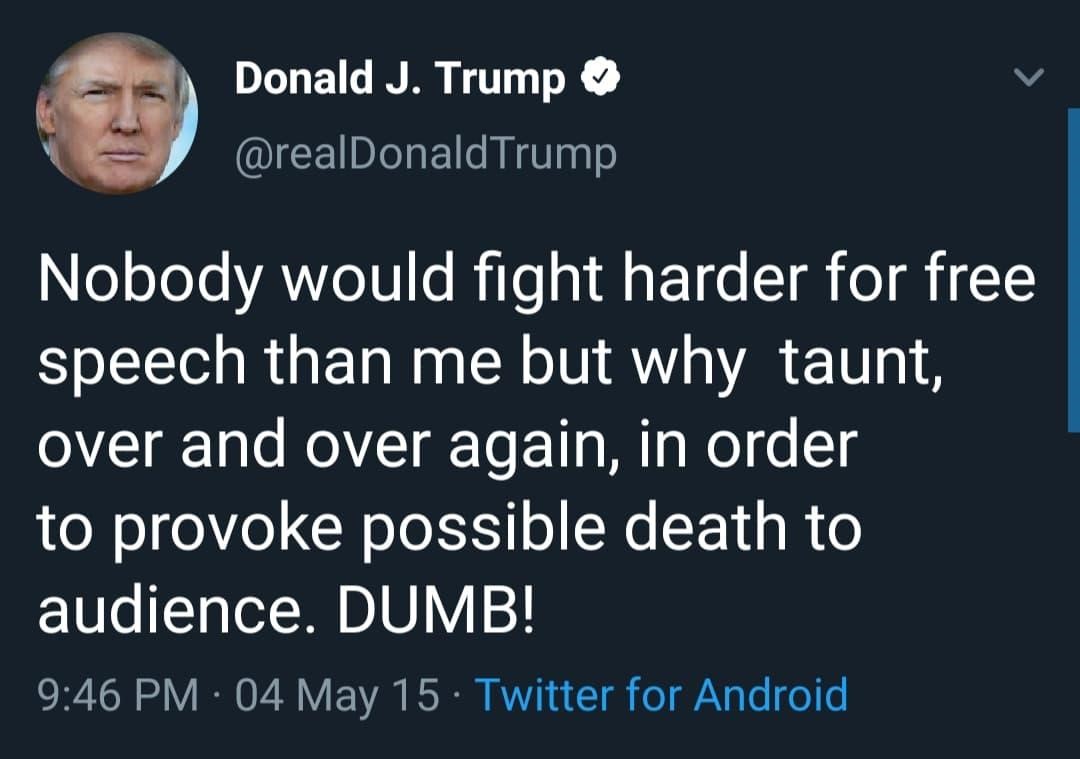 In another example of hypocrisy, Trump, in 2017, criticized the New York Times for not adhering to their “Social Media Guidelines.” In an effort to preserve the credibility of their journalists, NYT released a set of guidelines for their journalists to follow while engaging on social media. The guidelines suggested that journalists not express partisan opinions or editorialize.

Similarly, in June of 2019, Twitter released its own set of rules for accounts held by public figures. The new policy would add a notice to rule-violating tweets made by public figures, in the interest of providing important context to general users. Because public figures can powerfully shape the public conversation, Twitter decided those users deserve higher scrutiny. To be considered a Twitter public figure, the user must:

Trump is all three. Twitter was enforcing its public interest policy when they added fact-checks to Trump’s false claims about mail-in ballots. Trump has no problem pointing the finger at companies that fail to follow their own rules. It’s only when the rules are used against him that he suddenly expects noncompliance.

But Twitter isn’t the only social media company subject to Trump’s ire. Trump also constantly decries Facebook and Google for being biased towards his Democratic opponents: 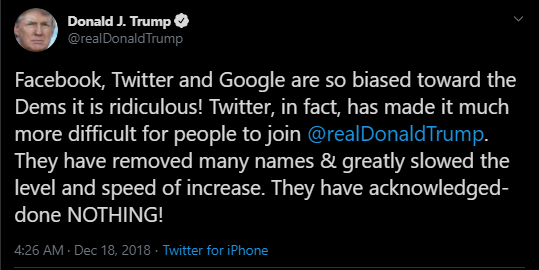 Yet, he himself has acknowledged the tremendous power social media gives him over his constituents. He derives success from having more Twitter followers than the “haters and losers” that oppose him. His massive following clearly supplies him with a gratifying sense of self-importance. Though Trump claims Twitter has made it harder for people to follow him, I counted 31 Tweets entirely dedicated to boasting about his follower count. Here is a sampling: 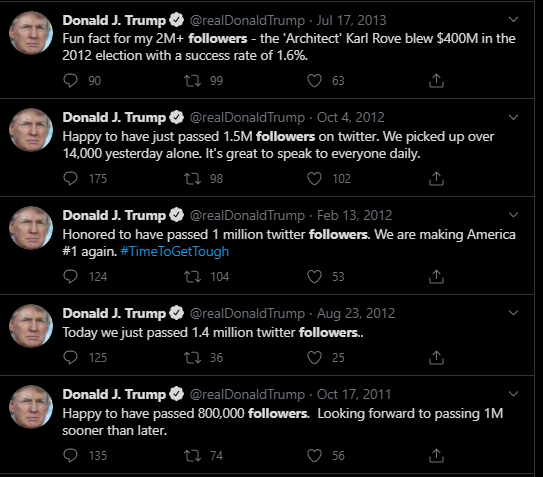 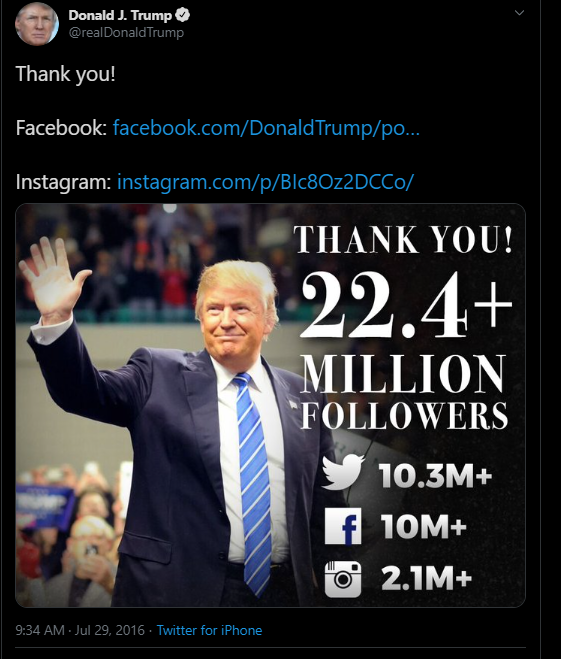 Obviously, social media has played a key role in every aspect of Trump’s presidency. In 2016, the Trump campaign spent nearly $250 million on digital advertising, $90 million of which went towards generating millions of Facebook ads. In 2019, his campaign spent $20 million on 218,000 Facebook ads. By comparison, former Democratic candidate Tom Steyer came second in ad spends at $16.8 million in 2019. Pete Buttigieg came second in ad volume at 74,286 ads. The Trump Campaign is also the second biggest spender on Google and YouTube advertising, having spent $26 million since 2018. 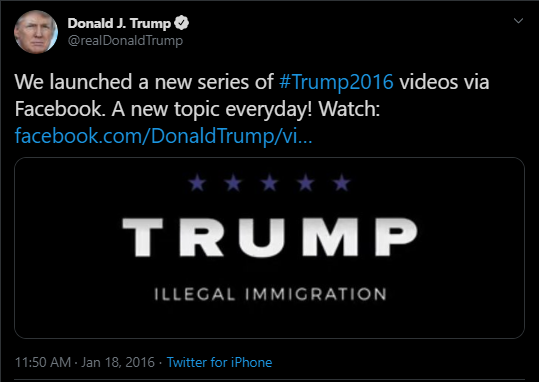 And just recently, Trump even went as far as to compare his followers to massive advertising conglomerates.

← Americans Would Probably Love Section 230—If They Understood It (Cross-Post)
President Trump Loves Section 230 for Himself, Just Not for Anyone Else (Guest Blog Post) →
Subscribe to Blog via Email
Categories