[Note: as I’ve mentioned before, sometimes Westlaw randomly spits out cases months after they were issued. This opinion is 4 months old but just appeared in my Westlaw alerts this week. Despite its age, I’m blogging it because of its topicality.]

jointly developing the hit list of former and current employees, requested confidential information from the individuals on the hit list, and combined to use social media to infect search results concerning Tanisha Systems.

Their alleged initiative included a blog, tanishasystemsucks.wordpress.com, published in Jayaprakash’s name but allegedly:

Chandra commented on the blog site, “vouching for the correctness of the content by praising the author as … having shown ‘the real picture of Tanisha Systems,’” and emailed the blog post’s link to Tanisha Systems employees on his “hit list,” urging them to forward the blog and share it widely

On its face, as I discussed in my Co-Blogging Law article from a decade ago, Chandra looks well-positioned for a Section 230 defense. Tanisha seeks to hold Chandra liable for endorsing Jayaprakash’s content and promoting it, and the court emphasizes that Section 230 applies “to most (and perhaps all) of Defendant’s conduct in forwarding the blog post and providing commentary supportive of its contents.” The court also says that “this is a Complaint with problems.” Yet, the court denied Chandra’s motion to dismiss. Why?

Georgia recognizes a “conspiracy to defame” claim, and that’s how court considers Chandra’s role. Otherwise, the court says, “the CDA immunity provision likely would apply in the event Tanisha Systems had failed to allege that Chandra conspired to develop the content in the allegedly defamatory blog post.” The court amplifies:

The Court rejects Plaintiff’s argument that the CDA does not apply to Chandra’s actions in forwarding via email the allegedly defamatory and adding his own statements of approval. It is only because Tanisha Systems has alleged that Chandra conspired with Jayaprakash to defame it that it evades the CDA immunity provision. (emphasis added)

Citing the Jape case, the court reinforces that “Chandra’s ‘adoption’ and ‘vouching’ for the blog post (by stating in the blog comments section that it shows ‘the real picture’ of Plaintiff) and his forwarding of the blog link are, without more, insufficient to show he helped develop or create the content of the blog post.”

Still, the court notes that per Roommates.com, Section 230 excludes defendants who materially contribute to the alleged unlawfulness of third party content. While noting the difference in this case’s facts from Roommates.com, the court says:

the principle of that case is that a defendant cannot use the CDA to evade liability for defamatory content he helped create, because that content was not truly provided by “another” independent content provider. That principle is sound and applies here

Not really. Recapitulating the issue as whether the defendant “helped create” defamatory content does little to advance the analysis. What does it mean to “help create”? This is exactly the same problem the Roommates.com court faced when trying to interpret the statutory verb “develop.” A defamatory item of content is the product of many inputs. Which, if any, of those inputs “helped create” the output and should face liability accordingly?

The court explained what facts led it to reject Chandra’s motion to dismiss:

Drawing all inferences (generously) in Tanisha System’s favor, it appears that Tanisha Systems alleges that Jayaprakash and Chandra operated as a team to create the defamatory blog post at issue and to reinforce its impact by having Chandra post supportive remarks in the guise of an allegedly independent commenter. This kind of assistance plausibly suggests that Chandra “created or developed” the information “in whole or in part.”…[FN9] After all, it would make little sense to allow an individual to work in concert with another to defame someone, but allow him to disclaim liability because he worked behind the scenes, did not initially publish the defamatory statement he helped create, and only “passed along” the defamatory statement once it was out in the air.

There’s almost an “evil mastermind” air to the court’s discussion. The way the court describes it, Tanisha sufficiently alleged that Chandra wanted to defame Tanisha, talked with Jayaprakash about defaming Tanisha, sat back while Jayaprakash did the dirty work, then went around and promoted Jayaprakash’s dirty work while throwing up his hands saying “…but I didn’t say it!” Based on this Hollywoodization of the facts, the court’s discussion shouldn’t extend to the plaintiffs’ more typical allegations that review websites and web hosts conspire with their users to engage in defamation.

Still, it’s maddening that the court went this direction at all. As noted above, the court said the complaint had problems, and the court’s paranthetical indicated it was “generous” in its inferences. Plus, FN9 says “The Court offers no opinion on the likelihood of these allegations, but does note that if Tanisha Systems fails to prove that Chandra did more to contribute to the defamatory blog posting than merely echoing it in his comments and forwarding it to friends, it faces a tough road ahead in this litigation with respect to its defamation claim.” Furthermore, when the court says that “Tanisha Systems has sufficiently [FN8] pled that Chandra materially contributed to the development of the blog post,” FN8 taunts the plaintiffs: “But not by much.” Finally, though it doesn’t dismiss the complaint, due to the complaint’s “weakness,” the court orders Tanisha to make some very specific disclosures that it may not be able to make.

With all of these problems, many judges would have dismissed the claim with leave to amend. Instead, although the judge fully grasped the Section 230 implications, this is another ruling where the judge gave the plaintiff the benefit of the doubt rather than let Section 230 instantly resolve the case. I respect careful and cautious judges, but as I’ve discussed before, typically these judges undervalue the social benefits of early Section 230 dismissals.

Because of Westlaw’s delay, we know how this story turns out. The parties had a mediation on February 9 that led to an undisclosed settlement, although curiously the parties jointly asked the judge (and she agreed) to conclude that the blog post had defamatory content was actionable unless privileged. Perhaps that joint motion helps with insurance claims?

Because this ruling was such a close call, and because the opinion contains many pro-Section 230 statements even in a defense loss, I really hope this ruling won’t revitalize plaintiffs’ conspiracy-to-defame allegations as a workaround to Section 230. Cf. Cornelius v. DeLuca; Barrett v. Rosenthal. 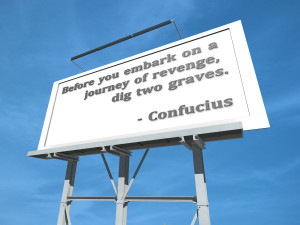 Photo credit: “A Billboard with Before you embark on a journey of revenge, dig two graves” // ShutterStock

Meanwhile, this ruling reminds disgruntled ex-employees that there are right and wrong ways to air their grievances against ex-employers. If an ex-employee’s mentality is really to “screw” the ex-employer (as alleged in this case), that’s probably a road to trouble. A Confucius proverb says: “Before you embark on a journey of revenge, dig two graves.” And as Inigo Montoya said, “There’s not a lot of money in revenge.”