The plaintiffs contend that their Merrill Lynch brokerage money was swept into unduly low-earning accounts. Among other things, they alleged breach of a quasi-contract, a claim that cannot work if there was an express contract. So, at issue in this case is whether the brokerage customers properly formed a contract with Merrill Lynch during the account creation process. The court says yes.

The court runs through the standard clickwrap/browsewrap definitions but says “Mere classification of a web-based contract as a “clickwrap agreement” or a ‘browsewrap agreement,’ however, does not necessarily determine the contract’s enforceability.” As usual, the wrap terminology only serves to lengthen the opinion, not assist the analysis. The court also considers whether consumers got adequate notice, though hyperlinking to the terms is OK. (Cites to Meyer v. Uber, Starke v. Gilt Group, and Spitzer v. Direct Revenue).

The court says “Plaintiff entered a valid, binding clickwrap agreement; the terms were ‘reasonably conspicuous,’ and Plaintiff was required to affirmatively agree to them.” 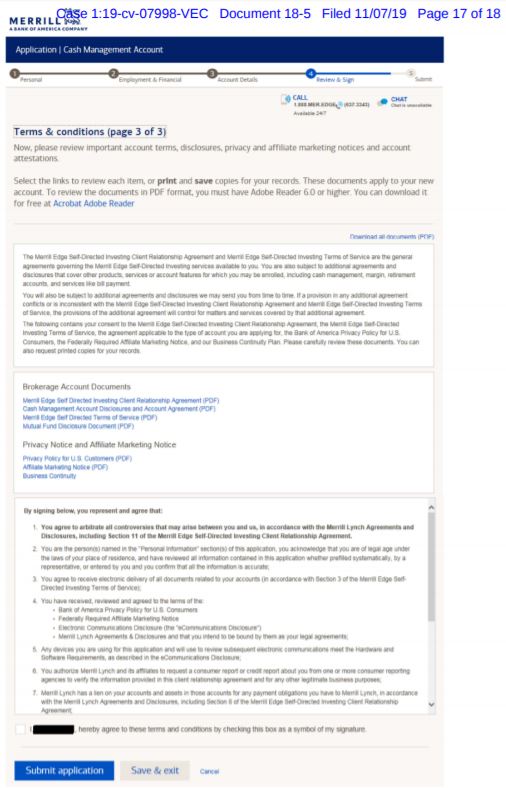 Some factors pointing towards formation:

The court says the call-to-action was effective:

The third page of the Terms and Conditions also includes a text box with twelve individually numbered account attestations. Paragraph twelve states that Plaintiff “affirmatively consent[s] to having [her] available cash balances deposited or invested through the Sweep Program in accordance with Section 13 of the Merrill Edge Self-Directed Investing Client Relationship Agreement.” As noted supra, the CRA is one of the PDFs hyperlinked on the same page. The text box has a visible scroll bar, indicating that Plaintiff should scroll down to read all twelve terms. The text box also instructs Plaintiff in boldfaced type that her signature manifests agreement to each paragraph. Plaintiff’s argument that she did not have constructive knowledge of these twelve additional terms because they were not all simultaneously visible on the screen is silly. The fact that a user might need to scroll down to read all of the attestations terms does not render them unenforceable any more than the fact that a paper contract has more than one page renders it unenforceable [cite to Feldman v. Google] In fact, Plaintiff’s own opposition attaches as exhibits cases in which clickwrap agreements that displayed terms in a text box with a scroll bar were enforced. Because the text box included individually numbered paragraphs, a visible scroll bar, and a bolded instruction that, by indicating assent, Plaintiff was agreeing to the listed terms, the attestations are binding.

The combination of the conspicuous hyperlinks, the text box with individually numbered attestations and a visible scroll bar, and the box at the bottom of the page requiring the user to click “I Agree,” provided sufficiently clear notice of the terms of the agreement, including the sweep provision, and formed a binding agreement.

The plaintiffs noted that Merrill Lynch advertised that users could complete their account formation process in as little as 10 minutes, which encouraged plaintiffs not to read the disclosures (presumably, there’s no realistic way anyone could read all of the voluminous terms in 10 minutes). For this reason, the plaintiffs asked for discovery to prove that consumers routinely never look at the linked PDFs. The court says none of this matters:

an individual’s failure to read the terms of a clickwrap agreement, even if they are only available through a hyperlink, does not render the agreement unenforceable…there is no evidence that Defendant put time constraints on Plaintiff’s ability to read the relevant account documents before submitting her application

← What is a “True Threat” Online?–In re. R.D.
Fortnite Defeats Another Lawsuit Over Emote Dance Moves–Brantley v. Epic Games →
Subscribe to Blog via Email
Categories