Tomorrow, the House Judiciary Committee will markup the Allow States and Victims to Fight Online Sex Trafficking Act of 2017 (abbreviated to “FOSTA”). It appears a new substitute version of FOSTA will be marked up, not the bill as introduced. This makes a total of four bill versions: SESTA as introduced, SESTA as amended, FOSTA as introduced, and the new substitute FOSTA. This post recaps this complicated situation.

While I continue to believe that none of the bills are good policy, the substitute FOSTA version is better than SESTA as amended and FOSTA as introduced. Thus, compared to the existing options, I prefer substitute FOSTA. However, it needs some changes that I discuss below.

[Note: a few weeks ago, I testified at the House Energy & Commerce Committee against FOSTA as introduced. I didn’t get a chance to post my testimony here, so I encourage you to check it out as part of reviewing this post.]

Overview of the Substitute FOSTA

The substitute FOSTA has the following main provisions:

Intent Standard for Criminality. Opponents of FOSTA/SESTA have regularly objected to online service liability for knowledge or recklessness towards third party content. These scienter standards set up a moderator’s dilemma: if services are liable for what they know about third party content, they may rationally choose to do less policing work as a way of reducing liability-creating knowledge. In contrast, the substitute FOSTA requires intent to promote or facilitate illegal activity (prostitution), which avoids the moderator’s dilemma.

Shifted Emphasis to Online Prostitution. Substitute FOSTA regulates online prostitution, a larger category of activity than sex trafficking, which is defined as compelled or underage prostitution. Prostitution is generally illegal in the US (and the bill contains a safe harbor for the limited circumstances where it’s legal), so the bill “narrowly” criminalizes the defendant’s intent to promote or facilitate illegal activity. However, because prostitution generates so much activity online, this law potentially affects the entire Internet community, including all “legitimate” online services.

Reduced Civil Exposure. Substitute FOSTA creates a new civil claim when a defendant intended to promote or facilitate prostitution AND either (a) involved 5+ victims, or (b) reckless disregarded how its conduct violated the federal anti-sex trafficking statute 1591(a). The civil claim remains subject to Section 230, and the draft has this unusual provision:

Consistent with section 230 of the Communications Act of 1934 (47 8 U.S.C. 230), a defendant may be held liable, under this subsection, where promotion or facilitation of prostitution activity includes responsibility for the creation or development of all or part of the information or content provided through any interactive computer service.

This language reinforces Section 230’s existing statutory definitions of “information content provider,” which says that a party is an information content provider for any content they create or develop in whole or in part. (I just did a lengthy blog post about the develop-in-part language). All of this is confusing because I’m not sure how the intent requirement intersects with Section 230, i.e., if the defendant has the requisite intent, isn’t that first-party liability? I’ll revisit this odd provision shortly.

National Standards. FOSTA and SESTA as introduced allowed for state law variations of online service regulation without any Section 230 limits. In particular, FOSTA as introduced would have authorized an infinite number of existing and new state crimes that could vary widely across jurisdictions. Substitute FOSTA bases liability only on the federal crime standards, creating a uniform national minimum standard for liability. (States could still pass idiosyncratic laws that add extra elements, but that would make things harder for law enforcement).

How the Substitute FOSTA Could Be Improved

Thus, there are several reasons to prefer substitute FOSTA over the alternatives: its scienter standard avoids the moderator’s dilemma, it sets a single national standard of liability rather than allowing for state law variations, and it directly links any civil liability to the federal crime. Substitute FOSTA can be further improved with these changes:

We can’t easily eliminate the risk of bogus state and local investigations due to substitute FOSTA, but we can blunt the 5+ language. Something like “promotes or facilitates the prostitution of 5 or more persons HIMSELF OR HERSELF (NOT CONSIDERING THE ACTS OR CONTENT OF ANY THIRD PARTIES).” This change would not treat third party promotions as part of the enhancement, and it would take some wind out of the sails of overeager prosecutors who can find many more than 5+ ads on a site.

I’d welcome other thoughts about how we might curb overzealous state and local investigations.

Consistent with section 230 of the Communications Act of 1934 (47 U.S.C. 230), a defendant may be held liable, under this subsection, where promotion or facilitation of prostitution activity includes responsibility for the creation or development of all or part of the information or content provided through any interactive computer service.

This language is more like a statement of intent than compulsory language. At minimum, it should be removed from the bill and put into legislative history.

As drafted, it seems to say that if an online service is responsible for ANY content on its site, it is responsible for ALL content, including all third party content. I don’t think that’s what was intended; and it’s certainly far beyond the law today. The Roommates.com case is quite clear that responsibility for third party content attaches only when the defendant creates or develops what made the content illegal. Thus, I would rephrase this:

A defendant may be held liable, under this subsection, WHEN THE DEFENDANT PROMOTES OR FACILITATES prostitution activity BY CREATING OR DEVELOPING all or part of WHAT MAKES the information or content provided through ITS interactive computer service ILLEGAL.

No Monitoring Obligation. To address the moderator’s dilemma in SESTA, I proposed a new Section 230 addition that emphasizes defendants wouldn’t be punished for trying to police anti-social content. Substitute FOSTA bypasses the moderator’s dilemma, so that provision is less urgent. However, reinforcing that monitoring and filtering is good, not bad, would still help with assertions of intent based on circumstantial evidence. So I reiterate my proposal for a new Section 230(g):

The fact that a provider or user of an interactive computer service has undertaken any efforts (including monitoring and filtering) to identify, restrict access to, or remove, material it considers objectionable shall not be considered in determining its liability for any material that it has not removed or restricted access to.

How Do I Feel About Substitute FOSTA? I continue to believe that Congress does not need to pass any bill: the SAVE Act did the work Congress wanted it to do; the Rentboy and MyRedbook prosecutions show the DOJ has effective legal tools (recall that both involved a prosecution for online prostitution, not sex trafficking, so they cover very similar ground to substitute FOSTA); Congress has other anti-sex trafficking initiatives in queue that may be more helpful; and it’s not empirically clear that efforts to extinguish online prostitution ads will protect victims. So here’s how I’d rank my priorities:

2) second-best outcome (a distant second): substitute FOSTA due to the intent scienter, national legal standard and tight linkage between civil and state law enforcement claims and the federal crime.

3) third-best outcome (substantially behind substitute FOSTA): SESTA as amended, which fixed some of SESTA’s roughest edges but still retained its core imposition of the moderator’s dilemma.

4) fourth-best outcome: FOSTA as introduced. That version is probably already defunct. At least, I hope so.

However, “tech” support for substitute FOSTA will not be uniform. First, the Internet Association already endorsed SESTA as amended, so they are effectively blocked from embracing substitute FOSTA. Second, some so-called “tech” companies came out in favor of SESTA, and they may continue to support it, especially to score more brownie points with the sponsoring senators. For example, check out this tweet from IBM from Thursday (before substitute FOSTA got publicly posted): 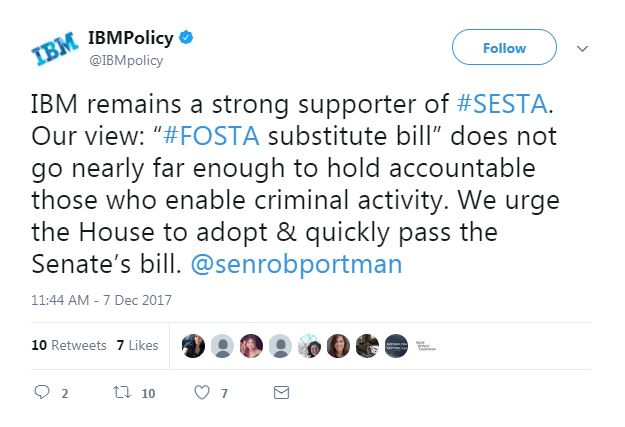 [It says :”IBM remains a strong supporter of #SESTA. Our view: “#FOSTA substitute bill” does not go nearly far enough to hold accountable those who enable criminal activity. We urge the House to adopt & quickly pass the Senate’s bill. @senrobportman“] I’m sure IBM did this tweet totally on its own initiative, without any prompting from Sen. Portman’s office, and based on its vast expertise in managing content online.

Victims groups may prefer SESTA as amended over substitute FOSTA. At minimum, the “I Am Jane Doe” crowd is on SESTA’s side and against substitute FOSTA (the Twitter chatter over the past few days isn’t voluminous, but it is revealing). At the House E&C Committee hearing, Rep. Blackburn supported FOSTA as introduced, and I’m not sure how she’ll feel about the substitute or if/when the House E&C committee will do its own markup.

So here’s how things look: if Reps. Goodlatte and Wagner are united, even if uneasily, and the Internet community favors or doesn’t oppose substitute FOSTA, there’s a significant chance that substitute FOSTA will pass the House (perhaps with some amendments).

House/Senate Conflicts. SESTA has 52 co-sponsors plus the support of the Internet Association; plus some victim advocacy groups will support SESTA 100%. The main thing slowing down SESTA is Sen. Wyden’s hold on the bill.

Sen. Wyden has softer words for substitute FOSTA over SESTA. On Friday, he said: “This is a smarter, more effective approach to go after criminal sex traffickers and prevent these heinous crimes. I’ve pushed to build on my record of giving law enforcement effective tools to put criminals behind bars, without undermining the foundations of the Internet.” In theory, he could place a hold on substitute FOSTA, but more likely he’ll use his SESTA hold to prioritize the Senate’s consideration of substitute FOSTA.

If SESTA passes the Senate (over Wyden’s hold) and substitute FOSTA passes the House, what happens then? One chamber could acquiesce to the other, the bills could be reconciled in conference (not an easy task, and goofy things could happen there), or there’s a very remote chance of paralysis that results in no bill passing Congress.

Post-Congressional Enactment. SESTA/FOSTA will not be Congress’ last review of Section 230. Congress already addressed online sex trafficking in the 2015 SAVE Act and has revisited the topic a scant 2 years later. Surely the advocates will be back a third time and more. So whatever “wins” the Internet community secures in the SESTA/FOSTA text may be short-lived.

Meanwhile, other victims advocacy groups will be targeting Section 230. We’ve repeatedly identified the terrorist victim group as the next logical advocates. The substitute FOSTA draft, with its high scienter bar, restricted civil claims, and national legal standard, will provide a better starting point for the inevitable clone-and-revise discussions.

Other Comments on Substitute FOSTA