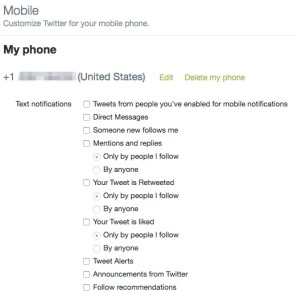 This is a TCPA lawsuit against Twitter. The claims are based on text messages sent to phone numbers where the subscriber was a Twitter user and signed up to receive text updates but later the phone number got recycled to a new subscriber. As a result, the person now receiving Twitter’s SMS updates did not opt-in to receive them.

Twitter raised two possible defenses. First, it did not “make the call,” as that phrase is used in the TCPA. Second, it’s not responsible for the underlying content and thus immune under Section 230. The court rejects both defenses.

Did Twitter make the call within the meaning of the TCPA? The court says that Twitter converts its tweets into text and (as alleged by plaintiff) uses an auto-dialer. The only other possibilities for “who made the call” are the tweet’s author or the person who opted in originally. The court says the tweet author “can’t possibly” be the maker because this user has no control over who receives his or her tweets and does not even know who is signed up to receive text alerts. Thus, he or she has no idea whether they are even making the call. Similarly, the court says that the person who initially opted-in can’t be the maker of the call because all that person did was to sign up to receive tweets via text message:

[The idea that this person is the maker of the call is] contrary to the ordinary meaning of the word “make” – when someone signs up to receive a call from someone else in the future, he is not ‘making that call when it comes in.

[Eric’s comment: it makes me wonder if it’s possible *no one* was a “maker” under the statutory definition? The judge didn’t seem to consider that possibility.]

Because the plain language of the statute does not, in the court’s view, support Twitter, the court looks to a 2015 FCC ruling that addressed the issue of a platform’s liability for text messages initiated by users. The FCC looked at two apps, TextMe and YouMail. With respect to TextMe, the agency said that a user who invites people on his contact list to join the service is the one who initiates the call as he is picking among various contacts to determine who is invited. This is slightly different from both the subscriber of the previous number or the person sending the tweets—neither of them are actively sending the texts. YouMail similarly sends text messages based on the user’s preference. And the FCC relies on the app user’s “involvement in the process of creating and sending the messages in response to received calls,” in finding that the app user and not YouMail was the person who made the call.

The court also says the FCC’s interpretation of the goals and purposes of the TCPA favors the plaintiff. Commenters noted the recycled number problem to the FCC and argued that the previous owner of a recycled number should be considered the “called party”; so to the extent this party consented, callers who had received consent should be off the hook. The FCC rejected this approach, noting that one of the purposes of the TCPA is to protect consumers from unwanted calls, and the approach urged by the commenters would leave consumers unprotected. The court says that Twitter’s suggestion is at odds with the FCC’s interpretation of the TCPA and its purposes.

Twitter also argued that an adverse ruling would cause Twitter to reconsider providing text updates at all, but the court is not persuaded by this:

Finally, a few words in response to Twitter’s arguments about the potential consequences of this ruling. At oral argument, Twitter insisted that if it were deemed the “maker” of the calls by which tweets are sent to recycled cell phone numbers, it would have no choice but to stop sending those tweets. The implication seemed to be that this result would be unbearable. But even if Twitter made good on its promise to stop sending tweets by text message, Twitter users would be able to view tweets in all sorts of other ways: by checking their timelines on Twitter’s website or in Twitter apps, by enabling push notifications from their Twitter apps, or by signing up for email notifications from Twitter. It’s not at all clear, particularly in light of the FCC’s ruling about recycled numbers, why the need to disseminate tweets in this particular way (that is, by text message) should prevail over the need to protect owners of recycled numbers from getting unwanted texts.

Twitter also cited to the possibility of Southwest airlines being exposed to liability when it provides flight information updates via text message, but the court says this is unlikely. While there are multiple ways in which Southwest can update its customers, the update feature requires passenger input at the time of making a reservation.

Is Twitter Entitled to Section 230 Immunity: Twitter also argued it was entitled to protection under Section 230 because it did not author the tweets in question. Seems hard to dispute and an easy enough conclusion, right? Not so fast, says the court. Citing to Barnes, the court says that Twitter is not being treated as a publisher because “publication involves reviewing, editing, and deciding whether to publish or to withdraw from publication third-party content.” The court also says that the precise content of the messages is not the asserted basis of liability (it’s the form of the communication rather than its content).

This is not the end of the road for Twitter. As the court notes, it could still successfully argue that it did not use an autodialer and thus escape TCPA liability. Yahoo won summary judgment in a TCPA case involving a re-assigned number on this basis. Unfortunately, the Third Circuit sent the lawsuit back for a second look at the autodialer issue. (See “Third Circuit Revives TCPA Case Against Yahoo”.)

Recycled numbers are a long-standing problem. As the court notes, the FCC grappled with aspects of it and came to an imperfect solution. A dissenting commissioner (cited by the court) made good points regarding how plaintiffs have capitalized on texts to recycled numbers. This case, along with the one from last week, are good data points for lobbyists who are looking to get the attention of a legislator. As for the recycled number problem, one possible middle ground solution would be to give a company one free message, provided it includes an opt-out mechanism. That message, while unwanted, would not be the basis for TCPA liability, but future messages can be presumed to be consented to since the recipient did not take the simple step of opting out?

Finally, the court’s section 230 ruling falls into the “WTF Is Going On With Section 230?” category. (See Eric’s post from last month, collecting cases). The court cites to Barnes for the proposition that publication involves review and editing, but it takes a bizarro-world approach. The whole point of section 230 is that since the intermediary did not create the content, it should not be held liable for it, regardless of whether it made editorial decisions regarding it, or, in the exercise of its editorial discretion, declined to do so.

Eric’s comments: Yuck. So much to dislike in this opinion.

Perhaps what bothers me most is the court’s (and the FCC’s) denigration of people who choose to receive tweets via text. There’s a tinge of hubris when the court presumes that people should not need texts because they have other ways to receive the tweets–especially in light of how many folks, especially millennials, strongly prefer text communications above other options. Judges (and the FCC) aren’t able to easily evaluate what’s the best medium for people to receive content; that’s why we prefer marketplace mechanisms to sort out questions like this. Furthermore, shutting down a communicate-by-text option may circumscribe information flows in ways we can’t anticipate or understand. In light of number portability where the volume of recycled numbers is already pretty small, I’m guessing that the percentage of texts sent to people who receive unwanted Twitter texts because the predecessor phone number subscriber opted-in is trivial–I’d be shocked if it were even 10%, but I’d expect it to be 1% or less. As a result, the net effect of this ruling is that legal protection for a minuscule minority trumps the communication desires of a majority of Twitter users who opt-into text messages. That’s just bad policy.

It also makes me wonder about the text message exceptionalism of regulating text messages as a medium. As I discussed in my Coasean Analysis of Marketing paper from over a decade ago, the TCPA is a weird opt-in outlier compared to other communication media. Rulings like this highlight its flaws. By giving the minority veto power over the media, rulings like this turn the TCPA into a plaintiff’s dream and doom text messaging as a fully-functional communications media.

Agreed! Yet, by listing all of these ways Twitter acts as a “passive conduit,” the judge is proving to himself why Twitter shouldn’t be liable. So…WTF?

As part of its reasoning, the court then calls Twitter’s text messages a “nuisance” and tried an offline nuisance analogy that I can’t bring myself to discuss. I directly addressed–and, I’d like to think, provided persuasive arguments against–the attempts to analogize marketing to “nuisances” in my Coasean Analysis of Marketing article. As a result, it’s disappointing to see a judge embrace this tired and analytically lacking analogy in 2016.

This opinion also got some attention because of Judge Chhabria’s lengthy shout-out to Judge Grewal, a rare judge who tweeted and who recently departed the bench for a job at Facebook:

Take, for example, erstwhile Magistrate Judge Paul Grewal, who recently left the bench to work for one of Twitter’s competitors. Apparently 964 people are interested in what Judge Grewal has to say [including me!], because that’s how many Twitter followers he has. In early June 2016, during his last two days on the bench, Judge Grewal posted nine tweets. For example, he said: “Anyone looking for a screaming deal on a slightly-worn judicial robe? I’ve got one ready to move.” In another example (one he was regretting until Game 5 but now is very proud of), Judge Grewal said the following about the NBA Finals: “Here comes @KyrieIrving. Count on it.” On his final day, he said: “Last claim construction issued; it’s time to go. Thank you N.D. Cal. from the bottom of my heart.”

All of this praise is richly deserved, but I wonder: how much will (former) Judge Grewal still tweet now that he’s working for the competition?

Court Rejects TCPA Claim on the Basis of Implied Consent