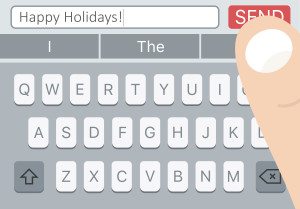 Plaintiffs sued American Eagle Outfitters and Experian, alleging claims under the TCPA for unwanted text messages. American Eagle is the retailer, and Experian provides marketing services. But neither of these entities actually pressed the “send” button. We’ve seen disputes over whether the defendants used an “automatic telephone dialing system” but this particular dispute turned on who actually sent the messages in question.

No direct liability as senders

Plaintiffs implicitly acknowledged Archer, a non-party who had declared bankruptcy, actually sent the messages. The allegations were specific about who did what leading up to the actual sending, but the court notes uses the passive voice for the last step:

1) AEO provides Experian with the campaign request form; 2) AEO deploys to Experian a list of numbers to which texts will be sent (“Campaign Ready File”); 3) Experian sends the information to Archer USA, Inc.’s (“Archer”) texting platform; 4) Experian schedules text messages to be sent; and 5) text messages are sent. [emphasis added]

The text of the statute and cases interpreting it have found that the party who “actually sent the message” can be directly liable.

Plaintiffs argued, citing to the most recent FCC ruling, that a person who does not actually hit send can be so involved in the process that they can be held directly liable. The court disagrees. The FCC’s interpretation is offered in the context of a different part of the statute which uses the word “initiate” rather than “make” (and is applicable to sellers).

The court assumes that vicarious liability is cognizable under the TCPA, but says plaintiffs failed to allege any facts regarding the nature of the relationship between Experian and Archer:

Significantly absent from Plaintiffs’ allegations, however, is any factual content regarding the relationship between Experian and Archer. Plaintiffs seem to suggest that the allegations that Experian “had the right to control the sending of the texts” and “in fact controlled and even scheduled the sending of each segment of the texts” are sufficient to plead Experian’s vicarious liability for Archer’s actions. Pls. Opp’n at 12. Indeed, Plaintiffs argue, without support, that “[w]hether Experian Marketing sent the texts via Archer’s messaging platform or whether Archer sent the texts after Experian Marketing directed it to do so is irrelevant to the issue of vicarious liability.” Id. But to plead vicarious liability under the TCPA in accordance with traditional tort principles, Plaintiffs must allege some facts regarding the relationship between an alleged principal and agent (or an alleged agent and sub-agent) and cannot simply allege general control in a vacuum.

Courts seem to be taking a closer look at TCPA cases. This is a good example of a court taking an unsympathetic view of what looks like a run-of-the-mill TCPA claim. The plaintiffs here are not suing over confirmatory texts or a single text that preceded an opt-out.

This case raises the question of whether the sender, the platform, or the entity advertised should be held liable for unwanted commercial texts. We’ve seen this issue come up in the group text platform and spam/email scenarios, among others.

The court is fairly strict here, and despite the numerous allegations that Experian was the driving force behind the texts, lets it off the hook. The court takes a pretty restrictive view of the path to liability for Experian. While we haven’t seen many rulings delve into the agency issue, the Ninth Circuit issued one from 2014 involving Taco Bell that comes to mind. (“TCPA Claim Against Taco Bell Fails For Lack of Agency”.) And it makes me think this one is appeal-worthy.