This lawsuit against Google alleges that Google unfairly benefits from deploying a CAPTCHA process when users sign up for free gmail accounts. Specifically, the complaint alleged that Google unnecessarily included a second image in the CAPTCHA, and it relies on users who sign up to freely transcribe “scanned images of books and newspapers, and also to decipher addresses found in images captured as part of [Google’s] Street View project.” The user is not compensated for having to transcribe the second image, but the complaint alleged that Google profited from its various digitization and transcription initiatives.

There was no dispute that the user signed up and clicked on the “I agree” to the terms of service in the process. The terms of service contain a forum selection clause, requiring disputes to be brought in the Northern District of California.

Plaintiff argued that the terms only applied to the Gmail service and the claims on the other hand arise from the reCAPTCHA service. The court rejects this argument, saying that the terms (and forum selection clause) apply to claims “arising out of or relating to” the services, and this includes the reCAPTCHA process as well.

This seems like a tough lawsuit on the merits! Cf. Jeung v. Yelp (Yelpers are not employees and volunteer their reviews). Despite the merits, plaintiff was in an interesting catch-22 here. As Eric details below, plaintiff had to agree to the terms in order to bring a claim (as the CAPTCHA was required as a condition of sign-up) but agreeing to the terms means that plaintiff was now subject to the numerous unfriendly provisions in the terms of service. Eric bemoans the filing of lawsuits that threaten to undercut free-to-user services. This seems like a good example of that.

The “scope of the terms” argument plaintiff raises is interesting, and is vaguely reminiscent of an issue from the Jawbone case I recently blogged about. Here, the court rightly rejects plaintiff’s argument that the CAPTCHA should not be subject to the terms of service.

Plaintiff’s rarely have success when a forum selection clause is invoked via a properly formed online terms of service agreement. For another recent example of this, see the recent case involving YouTube’s allegedly improper takedown: Song-Fi v. Google.

Google’s Terms of Service have been upheld many times in court. Nevertheless, there are two reasons I thought this case was interesting:

First, the plaintiffs are complaining that Gmail’s reCAPTCHA requires users to do “work” that confers value to Google because users are OCRing scanned text. This is yet another effort to interject employment law into online activities that bear no resemblance to employer-employee relationships (see the recent Jeung v. Yelp ruling over Yelp reviews for another example). The plaintiffs in this case are arguing that it violates consumer protection laws to make users do this “work” without telling them. For more on the increasing fears about online “labor,” see this post and some of Miriam Cherry’s works (such as this one). With the growing angst over employment law in the sharing economy, expect to see more of these employment law battles, even if this one strikes me as silly.

Second, to get a Gmail account, users had to create a Google account. The account signup page had a reCAPTCHA and a TOS checkbox on the same page: 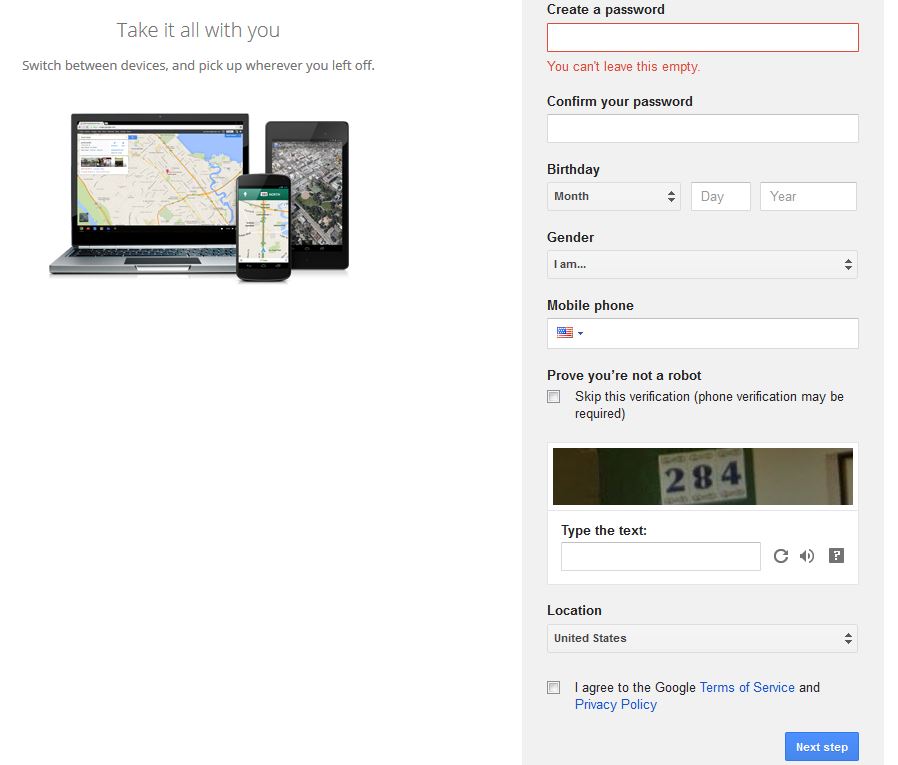 [The plaintiffs allege the reCAPTCHA had two words, of which the second was solely presented for transcription services. As you can see with the above screenshot from May 26, 2015, I was only presented with a single number.]

The TOS had a typical venue selection clause governing disputes about Google’s “Services,” defined tautologically as “our products and services.” Citing the Rudgayzer v. Google case, the court says that Google’s contract formation process was a valid “clickwrap” (ugh). The plaintiffs nevertheless argue that the reCAPTCHA wasn’t captured in the definition of “Services” (citations omitted):

Plaintiff argues the Terms of Service do not apply to reCAPTCHA, as a reasonable user would not understand reCAPTCHA to be a Google service. However, Plaintiff does not and cannot contend that the Terms of Service do not apply to her use of Gmail. Moreover, the forum selection clause is written in broad terms, covering all claims “arising out of or relating to” Defendant’s products or services. And, as Plaintiff notes, response to the reCAPTCHA prompt was required in order to create a Gmail account. In the court’s view, therefore, completing the reCAPTCHA, the sole basis for Plaintiff’s claims, arises out of or relates to the Gmail product or service.

Though Google successfully avoided it, the trap here should be obvious. Google’s TOS kicks in only after the user clicks an “I accept” type button, but the reCAPTCHA verification takes place before the “I accept” moment. Thus, Google could have been caught without the TOS protection for this pre-TOS activity. The court generously bailed out Google due to the TOS’s broad definition of “Services.” However, the problem could have been further mitigated by switching the order of the TOS acceptance and the reCAPTCHA verification steps so the reCAPTCHA came post-acceptance, not pre-acceptance. Even so, you can take a page out of Google’s playbook by defining your TOS’s scope to cover any claims “arising out of or relating to” your products or services. That language isn’t foolproof (as we’ve seen in some TM owner lawsuits against Google over keyword advertising) but it’s as good as I think you can do.