I’m way behind in blogging clickthrough agreement cases, but I’m prioritizing this opinion because of its simplicity. Whitt, who is deaf, sought a loan via a “peer-to-peer lending service” called Prosper. To confirm his identity, Whitt needed to make a phone call. He tried to use a Video Relay Service, but Prosper allegedly refused a call made that way. Whitt claims the refusal violated the Americans With Disabilities Act and related state laws.

To apply for the loan, Whitt allegedly had to agree to Prosper’s Borrower Registration Agreement, which required applicants to click a box adjacent to the bolded text “Clicking the box below constitutes your acceptance of … the borrower registration agreement.” Here is the screenshot Prosper submitted: 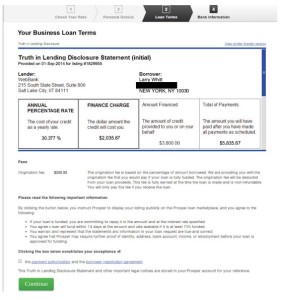 The borrower registration agreement contained an arbitration clause that users could opt-out of by sending notice within 30 days of contract formation. Whitt didn’t opt out, so Prosper moved to send this to arbitration. The court upholds the contract formation even though the agreement terms were visible only if Whitt clicked on the hyperlink:

In his opposition papers, Whitt suggests that he was not even constructively aware of the terms of the Agreement because those terms were viewable only by following a hyperlink. Whitt, however, does not contend that the hyperlink at issue was insufficiently conspicuous, and cites no authority indicating that a reasonably prudent website user lacks sufficient notice of terms of an agreement that are viewable through a conspicuous hyperlink. Moreover, Whitt simply ignores an abundance of persuasive authority—with which this Court agrees—supporting a proposition to the contrary. 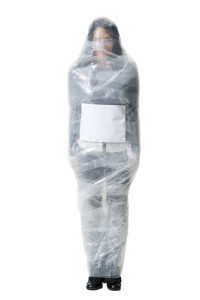 It’s refreshing to see the court sidestep all of the nonsense over whether Prosper’s agreement should be characterized as a clickwrap, browsewrap, bubblewrap, bacondoublecheesewrap or something else. Once we get the junk “wrap” terminology out of the way, a case like this is pretty easy. For my next birthday, I’d like a pony and to permanently retire any contract term with a “wrap” suffix.

Whitt also complained that he lost the ability to review the agreement terms when Prosper suspended his account 4 days later. The court calls that argument “frivolous.” As I blogged in the JDate case, “Courts Won’t Bail You Out If You Can’t Remember What Contract Terms You’ve Agreed To.” At one point, Denise Howell suggested that we need an app or plug-in that automatically collects and stores copies of online contracts as we enter into them. That still sounds a good idea to me.