Although competitive keyword advertising generates billions of dollars a year in revenue, only a few publicly available consumer surveys have evaluated its effects on consumers, such as whether consumers suffer legally recognizable confusion from the ads. Most of the publicly available consumer surveys were prepared by litigants in the course of their litigation, and not surprisingly their outcomes reflect the financial interests of their sponsors: 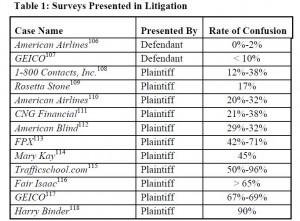 With this kind of “research,” we desperately needed an independent survey that wasn’t financially sponsored by a litigant.  To our rescue comes Profs. David Franklyn (USF) and David Hyman (Illinois), who conducted three independent consumer surveys and now present the results in their newly posted article, Trademarks as Keywords: Much Ado About Something? I encourage you to read the article in its entirety (and form your own opinions about the credibility of its methodology).  In this post, I’ll highlight two of their findings.

Consumers May Use Brands as Search Terms, But That Doesn’t Mean They Are Searching Only for the Brand.  The article says:

Many brand owners believe the opposite: consumers who use their brands as search keywords must want their brands–and only their brands, not their competitors’ offerings.  But consumers deploy many search strategies, including using a well-known brand as a “proxy” for the class of goods.  Imagine this: what synonyms would you use to search for goods similar to “The Clapper” or “Slinky“?  When there aren’t good synonyms, using the brand as a proxy search term makes sense.  But even when there are obvious generic synonyms, consumers still might choose a branded search term.  For example, if you already know you like the Nikon Coolpix p510, you might choose to search on that term, rather than searching on generic keywords like “digital camera,” as the fastest way to find the model’s close competitors.  I explore this issue in some detail in my 2005 article, Deregulating Relevancy in Internet Trademark Law.

With this in mind, giving brand owners the legal power to control search results isn’t in the consumers’ best interests. Instead, brand owners’ efforts to suppress competitive keyword advertising raise anti-competitive concerns.  Many consumers want to see competitive options in their search results (as the article says, “a majority of consumers use brand names to search primarily for the branded goods, but most consumers are open to purchase competing products”), but that’s exactly what brand owners don’t want them to have.

Brand Owners May Not Be Suffering Much Competitive Diversion from Competitive Keyword Advertising.  Many brand owners feel that competitors who engage in keyword advertising on their brands are “diverting”–i.e., stealing–their consumers. For example, in 2007, one (clueless) state senator argued that consumers seeing competitive keyword advertising were being “shanghaied by a pirate.”

“the actual probability of diversion turns out to be quite modest….the task of differentiating diversion from ordinary search behavior is going to be challenging.”

We can corroborate the article’s empirical finding by looking at the amount of money that brand owners have lost from competitive keyword advertising (as shown in official court records).  Some examples of financially dubious lawsuits by brand owners that I’ve seen over the years:

To me, the lessons are clear.  Brand owners usually are wasting money–often, a LOT of money–bringing lawsuits over purportedly lost business attributable to competitive keyword advertising.  In fact, there’s good reason to believe that brand owners lose little, if any, profits from the practice; and even if they do, the costs of the law vastly exceed those lost profits, making the litigation unprofitable.  This article gives brand owners more reasons to question the cost-benefit of litigation over keyword advertising.

[Note: I’ve written extensively on the keyword advertising topic.  In addition to my Deregulating Relevancy article, you may be interested in my articles on Brand Spillovers and Online Word of Mouth.]