The plaintiff sued because she’s blind and an Uber driver refused to pick her up with her guide dog. Uber invoked the arbitration clause in its TOS. The Maine Supreme Court says that the TOS wasn’t properly formed. This is the screen design at issue: 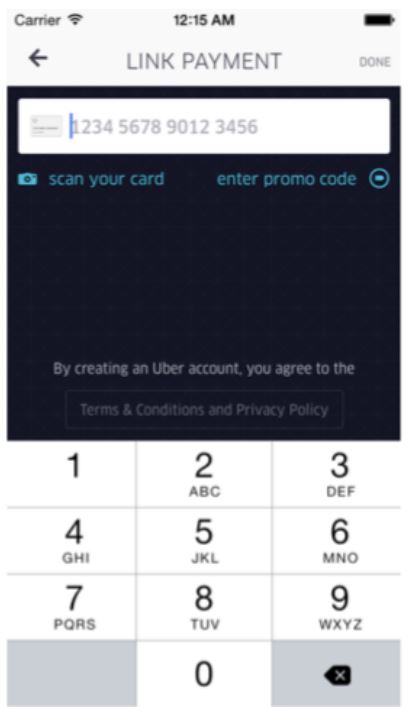 This is the Maine Supreme Court’s first foray into online contract formation. As most courts do, the opinion reviews the Berkson wrap taxonomy (browsewrap, sign-in wrap, clickwrap, scrollwrap) before ignoring the taxonomy in its analysis. The court identifies three components of a wrap analysis:

The court then essentially says the wrap taxonomy is worthless (at least, I wish it did): “Whether an interface provides reasonable notice of the terms of an online contract does not necessarily turn on the classification of the agreement as a scrollwrap, clickwrap, browsewrap, or sign-in wrap agreement; rather, it is essentially a function of how likely the terms and conditions themselves, or a hyperlink to them, are to come to the attention of the reasonably prudent user.”

Applying these principles to this case, the court says Uber used a sign-in wrap, not a clickwrap, and notice was inadequate:

The appearance of the hyperlink to the Terms, specifically the lack of underlining and the muted gray coloring, means that it is not obviously identifiable as a hyperlink. The sequence in which it appears during the registration process renders it less likely to draw the user’s attention. Its placement on the screen, particularly in light of the more prominent features on the same page, renders it relatively inconspicuous. Based on the totality of the features of the Uber interface that Sarchi utilized in registering—the focus on entering payment information rather than on the Terms; the small, lowercase font in which the notice and the Terms appeared; and the lightly outlined box containing the link to the Terms that did not have the appearance of a hyperlink or a clickable button—we conclude that the Uber interface Sarchi used to register failed to provide a prudent user with reasonable notice of the Terms.

Grey lettering on a black background is begging for trouble. Don’t do that.

The interface in Meyer increased the likelihood that the terms would come to the user’s attention—the hyperlink text to the terms in Meyer was underlined and in blue, and the hyperlink itself appeared in close proximity to the “REGISTER” button

The court says that Uber also did not get a proper manifestation of assent because Uber used a “done” indicator to move users forward (it’s in the upper right of the screenshot–it took me a few moments to find it). The court does not like the “done” approach:

to a reasonably prudent user, clicking “DONE” would not indicate assent to a contract or, in fact, anything beyond having completed the registration process. Given that the heading of the window read “LINK PAYMENT,” a reasonable user could easily think that clicking “DONE” meant that she was merely done entering her payment information, not done creating an account, much less agreeing to specific terms and conditions of the account. As Uber points out, the hyperlink notice leading to the Terms was on the same page as the “DONE” button. But the notice did not refer to the “DONE” button or explain the significance of clicking the “DONE” button, as it could have by indicating, for example, “By clicking DONE, you agree to the Terms.”

Just rewriting the call-to-action to cross-reference the “done” button would have ameliorated this point a lot. Another own-goal by Uber.

Uber could have designed its rider app to incorporate scrollwrap or clickwrap contracts that provided adequate notice of Uber’s original and updated Terms and required consumers to express actual assent, and it apparently decided not to do so.

This reinforces how I’ve been teaching online contract formation in my Internet Law course for years. One click (“sign-in wrap”) usually should work, at least so long as the other elements are properly handled, but two clicks (“clickwrap”) definitively resolves the issue for the court. This conclusion from the Maine Supreme Court doesn’t categorically reject sign-in wraps, but it casts enough doubt that it’s imprudent to take the one-click risk.

BONUS: Vercammen v. LinkedIn Corp., 2022 WL 221388 (N.J. App. Div. Jan. 26, 2022). The plaintiff, an attorney (sigh), paid for a LinkedIn premium subscription. The opinion implies that he used the account to post 15+ articles/day, including posts that advertised his business, both in apparent violation of LinkedIn’s TOS. (The court doesn’t use the term “spammer,” but that descriptor might fit the facts). As a result, LinkedIn issued multiple warnings and finally terminated his account. He sued for the account termination–despite the dozens of similar failed cases preceding him. Unsurprisingly, this case fails because LinkedIn’s TOS requires adjudication in California, not New Jersey. The court explains how LinkedIn used a sign-in wrap:

When completing his premium subscription order, plaintiff was required to click a button, stating, “Start your free trial.” Above the button was the following statement:

By placing this order you agree to our terms of service. To ensure continued service, we’ll store and update (e.g., upon expiration) your payment method. Learn about how to cancel and our refund policy.

The reference to the “terms of service” is a hyperlink, located directly above the button used to purchase the service, and by clicking on the reference, the user is taken directly to LinkedIn’s User Agreement….the clause was not submerged nor hidden