This case involves actor Michael Rapaport, who has appeared in many popular TV shows and movies. Apparently he’s edgy in real life, which he demonstrated through a CBS Radio show.

Barstool Productions “has cultivated its brand around providing ‘unfiltered,’ ‘controversial,’ crass, and sometimes humorous views on” sports and pop culture. Barstool poached Rapaport from CBS, and they entered into a “talent agreement.”

8 months into the relationship, it melted down. Rapaport took the bait from a Twitter user and disparaged Barstool’s fanbase for embracing the nickname “stoolies”:

(Remarkably, Rapaport didn’t pick on the “pole” misspelling. It pains me every time I see it).

Barstool fired Rapaport the next day by text (classy).

Rapaport escalated the matter. He still had the login credentials to Barstool’s Twitter account (oops–if you fire someone, IMMEDIATELY terminate their login credentials) and posted a video there calling Portnoy (Barstool’s founder) a “dumb motherfucker,” a “dumb fuck,” and a “bitch.”

In response to that and other provocations, “the Barstool Defendants published dozens of tweets, blog posts, online articles, videos, podcasts, and radio shows that accused Rapaport of being racist, a fraud, a hack, a wannabe, and a liar, having herpes, and stalking and beating his former girlfriend.”

[Unsurprisingly, the judge ran out of patience for these clowns. For example, she writes: “Rapaport’s [evidentiary] objections extend to documents that Rapaport himself produced in discovery. These objections are not well taken and, quite frankly, are borderline sanctionable.” 🙃]

The Talent Agreement contained a morals clause. Dafuq? Barstool hired Rapaport to sling garbage, yet the contract provides an immediate out if Rapaport brings himself or Barstool “into public disrepute”? (See a dispute over a similar clause). I wonder how aggressively Rapaport’s counsel negotiated that clause. At minimum, the clause should have established a baseline level of permitted disrepute. After all, Barstool built its brand around “controversial” and “crass” content, and Rapaport’s controversial and crass content is exactly why Barstool poached him. In any case, the court holds the issue of whether Barstool could exercise that termination basis over to trial.

Rapaport also alleged that Barstool didn’t try hard enough to procure advertisers for his “rant videos” (seriously, that’s what the court called them), as required by the contract. Again, dafuq? How many advertisers want to be associated with rant videos? (If you are such an advertiser, please contact me–I’d happily take your money). Barstool responded that advertisers weren’t interested because Rapaport was “very unpredictable” and used the C-word “incessantly.” This issue gets kicked to trial too.

Also…Rapaport used the C-word all the time and Barstool didn’t think that violated the morals clause? Instead, Barstool only became upset when Rapaport insulted the “intelligence” of an audience that was loyal to someone who routinely drops C-bombs? 🤡🤡🤡

Rapaport claimed that the Barstool team said Rapaport is “racist,” a “fraud,” a “hack,” a “wannabe,” and a “liar.” (They also called Rapaport a “loser,” one of Trump’s favorite insults).  The court says “these labels represent nothing more than the Barstool Defendants’ subjective evaluations of Rapaport that are incapable of being objectively proven true or false.”

Accusations that Rapaport had herpes and engaged in criminal conduct are capable of a defamatory meaning. The court responds:

audiences would readily recognize the challenged statements as representing the (often overtly biased) viewpoints of the Barstool Defendants…the statements were largely laden with epithets, vulgarities, hyperbole, and non-literal language and imagery; delivered in the midst of a public and very acrimonious dispute between the Barstool Defendants and Rapaport that would have been obvious to even the most casual observer; and published on social media, blogs, and sports talk radio, which are all platforms where audiences reasonably anticipate hearing opinionated statements.

For example, Barstool did a “diss track” where they said terrible things about Rapaport. The court says:

The tone and apparent purpose of the diss track reinforce for audiences that the video is not intended to reflect an accurate factual assessment of Rapaport. Exaggerated, vitriolic words and imagery pervade the six-minute-plus video to attack all aspects of Rapaport’s life, including his career, popularity, relationships, appearance, age, and legal troubles. For example, alongside the obviously hyperbolic statements that Rapaport identifies as defamatory are similarly sensational assertions that Rapaport is a “fucking 10 gallon drum of curdled milk,” a “walking blob of jizz,” a “snake-oil salesman with nothing to sell,” and a “puddle of pudding,” and that he looks like “Larry Bird’s mom’s sister,” or a “chemo Yertle the Turtle.” The video also suggests that Rapaport has such poor rap skills that the speaker would rather “get a spinal tap” or “go out to Neverland Ranch and sit in Michael’s lap” than listen to him rap.

I’m not sure why the comparison to Larry Bird and his family was unflattering. Larry Bird is a basketball hall-of-famer and a good-looking man. Plus, he has more class in his pinky finger than all of the litigants in this case combined. Also, Barstool fired Rapaport for bringing public disrepute onto them, but they are also fine calling someone a “walking blob of jizz”….seriously? 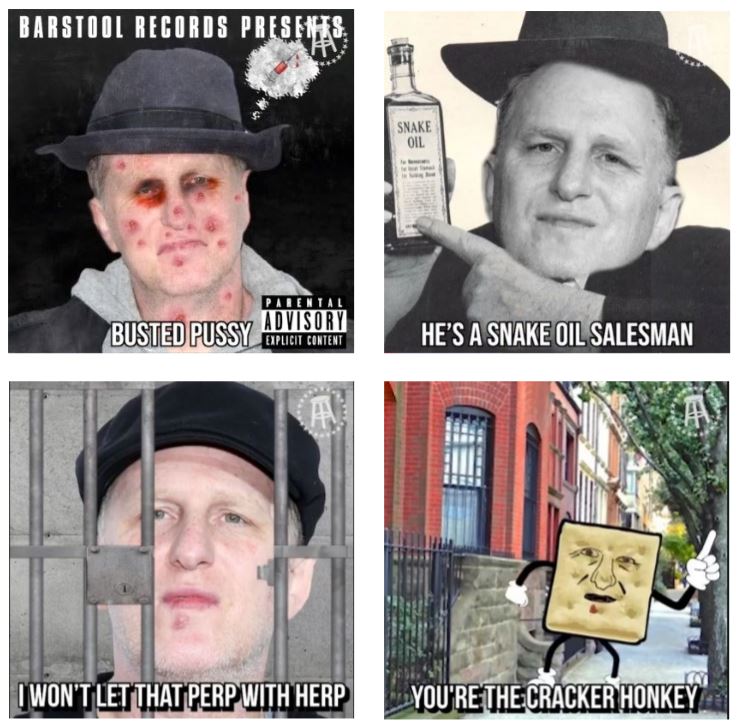 (Some background on the term “cracker”).

the context of this “diss track” video reasonably signals to viewers that the challenged statements are the prejudiced, opinionated viewpoints of the Barstool Defendants, not accurate factual assessments of Rapaport.

The court also says the Barstool team disclosed the basis of their “herpes” statement by showing these images:

Several times, the court vacillates between saying that the statements aren’t capable of defamation and saying the statements provided adequate support. To me, these photos suggest the Barstool team made a factual claim that Rapaport had herpes, but they provided their evidence supporting that claim, and that turned their characterization of the situation into non-actionable interpretation of the source data. It also negates actual malice. The court could have been more doctrinally precise here.

The Barstool team also made a “Fired Up” video. The court’s evaluation is similar to the diss track:

Just as no reasonable viewer would interpret the cartoon as asserting for a fact that Rapaport died as a result of having “Ding Dongs for Brains,” those same viewers would not understand the cartoon as factually asserting that Rapaport has herpes or that a lesion on his face speaks and serves as his producer. 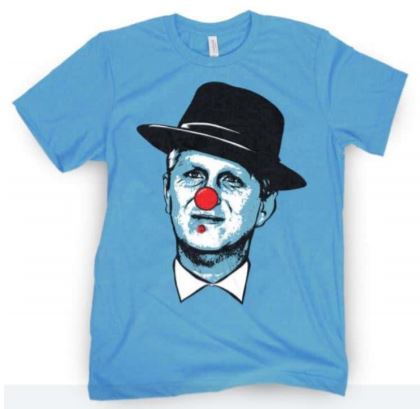 This is very close to the facts I tested in my Fall 2020 Internet Law exam. I really can’t make up exam facts crazier than real life. I kept thinking of the clown emoji 🤡🤡🤡 while working on this blog post. This image reinforced why. Judy Collins’ song from the mid-1970s kept playing in my mind: “Send in the clowns. Don’t bother, they’re here.”

With respect to subsequent tweets, the court says “courts interpreting New York law have generally found that comments made on Twitter are more likely to be understood by audiences as statements of opinion than statements of fact” (citing, among others, Jacobus v. Trump). For example, the court says “Given that the escalating quarrel was apparent to anyone who came across the tweet, Clancy’s rejoinder that Rapaport is a ‘creepy herpes riddled failure’ is best understood as an intemperate epithet delivered in the heat of a series of charged personal attacks rather than as an objective factual observation that Rapaport is a failure, is creepy, and has herpes.” The court similarly says blog posts are viewed as typically the author’s opinion, citing Wexler v. Dorsey & Whitney.

I’m glad that defamation claims are hard to win online. I see too many thin-skinned plaintiffs using defamation to suppress truthful information. However, I wonder if defamation-free zones online have enhanced the coarseness of our discourse across our society. People say terrible things online and, sadly, find a market for it. I don’t think more law is the solution to that problem, but we can and should vote with our eyeballs to not reward people who produce trash content.

Closing note. Covering a beef like this brings me zero joy. I wanted all of the litigants to lose. Maybe they were actually well-matched for each other. As the maxim goes, you lie with dogs, you’re going to get fleas.