Eighth Circuit Says a Browsewrap Might Form a Contract (and It Wasn’t Even a “Browsewrap”)–Foster v. Walmart

This is the latest dubious Internet Law ruling from the Eighth Circuit. (Other dubious rulings in 2021 include Select Comfort v. Baxter and Campbell v. Reisch). In this ruling, the court says Walmart may have imposed a binding arbitration clause on gift card buyers–even though it never used a proper call-to-action or demonstrated that the buyers took any affirmative steps to agree to the terms. The court also created a new definition of browsewrap that further plunges online contract formation law into anarchy. 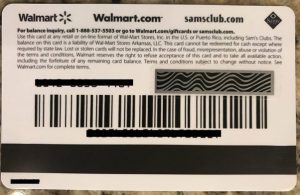 This case involves Walmart gift cards. The buyers claim that third-party malefactors could steal the funds and Walmart didn’t provide refunds. Walmart invoked the arbitration clause in its TOU. It argued that the gift cards said, on the back side, “[s]ee Walmart.com for complete terms.” If buyers had gone to Walmart.com,  they would have found a TOU that said “ALL DISPUTES ARISING OUT OF OR RELATED TO THESE TERMS OF USE OR ANY ASPECT OF THE RELATIONSHIP BETWEEN YOU AND WALMART.” The TOU claims it applied to anyone by “[u]sing or accessing the Walmart Sites.”

I trust the tenuousness of Walmart’s position is obvious. A few lowlights:

The district court concluded that the buyers had no notice of the terms and couldn’t be bound by them. The Eighth Circuit reverses and remands the case for a trial on arbitrability. How did the Eighth Circuit reach that conclusion?

The Eighth Circuit says that the TOU didn’t form on purchase because Walmart’s call-to-action (by “[u]sing or accessing the Walmart Sites”) expressly didn’t reach that circumstance. As usual, the court sidesteps the fact that a contract did form when the buyers completed the purchase, so Walmart is most likely arguing that the TOU amends the existing contract or constitutes a second in-parallel contract to supplement the contract formed at purchase.

The Eighth Circuit then turns to whether the buyers agreed to the TOU by accessing/using the Walmart Sites. It says a browsewrap “imputes assent through the user’s performance of some specific act—here, ‘using or accessing’ Walmart’s website.” It cites the 9th Circuit’s Nguyen case for this definition, but the Nguyen case defined “browsewrap” as “where a website’s terms and conditions of use are generally posted on the website via a hyperlink at the bottom of the screen.” The Eighth Circuit could not have used that definition because, here, the TOU were indirectly referenced on the back of the gift card, not at the “bottom of the screen.” So the Eighth Circuit is defining “browsewrap” differently than the Ninth and Second Circuits, for no apparent good reason.

As you know, I hate all of the -wrap terminology. I especially hate the term “browsewrap,” which I always enunciate with a sneer in my voice. And I really, REALLY hate that no one can agree on what the term “browsewrap” means. The Eighth Circuit’s definition is both meaningless and pernicious. It restates the general Contracts 101 principle that contract formation requires mutual manifestations of assent–which can be done by any method that reasonably communicates assent, including overt acts. By defining this as a browsewrap, the Eighth Circuit’s definition seems to reach all calls-to-action that say “by doing X, you agree to Y” and implies that the action of “doing X” turns the call-to-action into a “browsewrap.” That’s a recipe for a lot of confused rulings.

The court says the “parties do not dispute that this case involves a browsewrap agreement.” That concession by the plaintiffs seems unnecessary and against their own interests. However, they may have accepted the label because browsewraps usually fail in court.

Nevertheless, the court, like some others before it, says that browsewraps might be enforceable if consumers  had sufficient notice of the terms. The court says the district court too breezily rejected the possibility that buyers had inquiry notice of the terms. The parties debate whether any of the buyers accessed Walmart’s site; and some buyers may have tried to redeem the cards online. The court also wants to know more about “the exact location and prominence of the terms-of-use hyperlink, how many clicks it would have taken for the user to discover the arbitration provision, and whether the website changed during the relevant period.” The court also doesn’t rule out the possibility that the on-card disclosure (“see Walmart.com for complete terms”) constituted inquiry notice for the buyers (“In theory, this directive could have put the plaintiffs on notice to inquire further by telling them where to go for more information”). The district court will get the pleasure of revisiting all of these issues.

To me, it seems obvious that Walmart must lose this arbitration request. At minimum, the plaintiffs could exclude any buyers who actually went to Walmart.com. For those buyers, I just don’t see how the on-card disclosure (“See Walmart.com for complete terms”) can be enough to create inquiry notice given all of the problems I discussed above. So the net result of this Eighth Circuit ruling is that the parties should spend a lot more money to reach the same outcome, and the Eighth Circuit’s unnecessary and garbled recapitulation of the “browsewrap” term should make a further hash of an already messy jurisprudence.

To be clear, I think vendors can incorporate terms by reference into a B2C contract formation process, including offline purchases of chattel. Among other necessary steps, the incorporation should be incredibly obvious, the terms should be easy to inspect on the spot, and the call-to-action should be unambiguous. Walmart didn’t satisfy that approach, but they sure could have.

Some Prior Blog Posts on Walmart Litigation

← Lawsuit Still Goes to Arbitration, Even Though Amazon Has Since Removed Its Arbitration Clause–Nicosia v. Amazon
Previewing the “Lessons from the First Internet Ages” Symposium →
Subscribe to Blog via Email
Categories