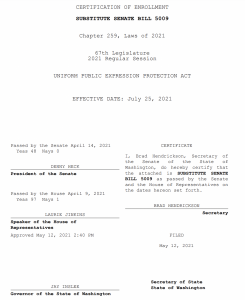 Scope of coverage: The statute applies to causes of action based on: (1) a person’s statement to a governmental body; (2) a statement on an issue under consideration by a governmental body; and (3) an exercise of someone’s First Amendment rights under the state or federal constitutions “on a matter of public concern”.

Exceptions: The statute contains several exceptions. Broadly described, those are: (1) lawsuits against the government; (2) a lawsuit brought by the government “to protect an imminent threat to public health or safety”; (3) claims against someone who is “primarily engaged in the business of selling or leasing goods” if the cause of action relates to their advertising; (4) lawsuits brought by victims against perpetrators; (5) suits relating to establishment of property ownership; (6) personal injury or wrongful death lawsuits or statements made regarding those lawsuits, unless the claim involves damage to reputation; (7) insurance lawsuits; (8) suits involving “common law fraud”; (9) suits relating to domestic relations (and no-contact orders); (10) suits relating to labor regulations; (11) suits brought under Washington’s consumer protection act; and (12) claims under federal law.

Exceptions to the exceptions: The statute applies to claims excluded under (3) – against those primarily selling or leasing, (8) – common law fraud suits, or (9) – domestic relations matters, if the cause of action:

(i) is “[a] legal action against a person arising from any act of that person, whether public or private, related to the gathering, receiving, posting, or processing of information for communication to the public, whether or not the information is actually communicated to the public, for the creation, dissemination, exhibition, or advertisement or other similar promotion of a dramatic, literary, musical, political, journalistic, or otherwise artistic work, including audio-visual work regardless of the means of distribution, a motion picture, a television or radio program, or an article published in a newspaper, website, magazine, or other platform, no matter the method or extent of distribution”; or

(ii) relates to the person’s “communication, gathering, receiving, posting, or processing” of “consumer opinions” . . . or “reviews or ratings of businesses”.

Effect of the statute and mechanics: The statute requires a motion to be filed within 60 days (or later if good cause is shown) of the filing of the pleading sought to be attacked. 14 days’ notice and an opportunity to withdraw the pleading must be given for the moving party to recover its fees. The giving of notice or filing of the motion broadly stays all proceedings between the moving party and the responding party. If it’s a multi-party action, the moving party may seek a global stay by showing that the remaining proceedings would affect an issue relevant to the anti-SLAPP motion. An appeal (which it’s worth noting must be filed 21 days after entry of the order appealed from) also stays the entirety of the action, including proceedings involving other parties.

If the statute applies, the cause of action must be dismissed if:

A key provision of the statute is the discovery stay and when the court may allow limited discovery. Discovery is stayed between the parties, and the party seeking discovery has to show that the specific information sought is necessary to satisfy the burden above, and the information is “not reasonably available unless discovery is allowed.”

Fees: The court “shall” award costs and fees (1) to the moving party if it prevails on the motion, or (2) to the responding party if it finds the motion was not substantially justified or filed solely with an intent to delay the proceedings.

Davis v. Cox was the case where the Washington State Supreme Court struck down the previous version of the statute. There, the court found fault with the evidentiary burden imposed by that version of the statute. It required the court (and not a jury) to weigh disputed evidence which conflicted with the right to a jury trial under the state constitution. This statute avoids that issue by framing the standard consistent with those applicable at the motion to dismiss and summary judgment stages.

The natural question to ask is “how does this help someone sued in a SLAPP suit”? The stay and discovery provisions, which require the responding party to jump through a bunch of hoops to obtain discovery, and the timing provisions, which require motions to be decided within a certain amount of time, will streamline considerations of SLAPP claims. There could be a flurry of motions, but a defendant has a means to obtain an expedited resolution of their claim and the prospect of obtaining fees. Technically, a party can achieve the same result by filing an early summary judgment motion, which will force a responding party to file a request to continue the motion and specify what discovery it seeks in order to oppose the motion, but the statute provides a nice roadmap for this process. When coupled with the prospect of obtaining fees, this will likely turn out to be a useful tool for the First Amendment litigator/rix.

Davis v. Cox involved a bunch of other challenges to the anti-SLAPP statute, which the court did not address. One possible challenge this statute presents is that the legislature is unduly tinkering with the discovery rules, which are the province of the courts. Another is that by restricting a party from obtaining discovery to which the party is otherwise entitled, the statute improperly burdens access to courts. Both of these issues were addressed by Washington State Supreme Court in Putman v. Wenatchee Valley Medical Center. That case invalidated a requirement that a medical malpractice lawsuit be supported by a “certificate of merit” from a medical expert. It’s unclear precisely how this statute would fare under Putman, although my read of that case is that the mere imposition on some limits on discovery should not in itself be problematic.

The statute does not apply to federal claims. Given the uncertainty in how to apply anti-SLAPP statutes in the Ninth Circuit, I’m surprised the statute wasn’t drafted to just apply only in state courts. Trying to apply the statute in federal court would leave me with questions around how the conflict between the typical discovery rules in federal court, and those required under this statute, would play out. This feels like a lot of unnecessary motion practice in federal court for a result that’s likely not consistent with the federal rules.

The exceptions to the exceptions are not immediately clear in terms of scope. It would have helpful to see an example or two of what or who those subsections are intended to protect.

There was very little pushback to the UPEPA in Washington, largely for the reason that there is no organized group who represents plaintiffs who bring abusive litigation. There was some minor quibbling about certain technical provisions of the UPEPA, but nothing that could be called opposition to the core operation of the UPEPA or to what it generally covered. Some questions were raised by a few local trial lawyers, but at the end of the day even the trial bar realizes that its constituency is far more likely to be the “little guy” defendants in abusive litigation (for example, Big Pharma Company sues the victims of a bad drug for defamation to try to intimidate them from pursuing their cases or forcing them to settle for peanuts) than they will be as plaintiffs bringing abusive litigation themselves.

[h/t: DWT, whose efforts were instrumental in the statute’s passage]

I believe Washington is the first state to implement the “Uniform Public Expression Protection Act,” promulgated by the Uniform Law Commission last year.

(Note how the uniform law retires the “anti-SLAPP” phrasing. The “PEP” alternative terminology puts a slight spring in my step).

On balance, the ULC’s uniform law is a positive development. I have quibbles with pieces of the law, but overall it’s a sturdy anti-SLAPP law that does a lot of good. The uniform law should help accelerate state-level adoptions of anti-SLAPP laws and perhaps encourage states with existing weak anti-SLAPP laws to upgrade to the modern standard. Perhaps it will also catalyze work on a long-needed federal anti-SLAPP law.

Two cautionary notes. First, the uniform law applies to the “exercise of the right of freedom of speech or of the press, the right to assemble or petition, or the right of association, guaranteed by the United States Constitution or [cite to the state’s constitution], on a matter of public concern.” (Washington’s law implements this provision verbatim). I have always been baffled by linking anti-SLAPP protections to the Constitution’s borders because it seems to create a logic pretzel. Arguably, a defamation defendant isn’t exercising a Constitutionally protected right to free speech–if the plaintiff proves defamation, the Constitution won’t protect the defendant. But at the time the defendant files the anti-SLAPP motion, we don’t know whether the statement is defamatory or not. Now what? I hope courts will treat all defamation claims as implicating the free speech right and thus presumptively triggering anti-SLAPP review so long as they relate to a matter of public concern.

The Davis v. Cox ruling was quite unfortunate, and it left Washington without any anti-SLAPP protection for 6 years. I’m thrilled the Washington legislature has filled this gap. Let’s hope the new PEP law accomplishes its goals.