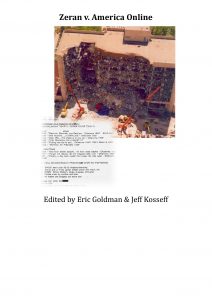 Section 230 has become a mainstream discussion topic, but unfortunately many discussants don’t actually understand it well (or at all). To address this knowledge gap, co-editors Profs. Eric Goldman (Santa Clara Law) and Jeff Kosseff (U.S. Naval Academy) have released an ebook, called “Zeran v. America Online,” addressing many aspects of Section 230. You can download the ebook for free at:

Zeran v. AOL is the most important Section 230 case of all time. The Zeran case was the first federal appellate decision interpreting Section 230, and its breathtakingly broad sweep turbocharged the rise of Web 2.0–with all of its strengths and weaknesses.

In recognition of Zeran’s importance, in 2017, Profs. Goldman and Kosseff helped assemble an essay package to honor the case’s 20th anniversary. They gathered two dozen essays from some of the most knowledgeable Section 230 experts. The essays address the case’s history and policy implications. Initially, Law.com published the essay package but then unexpectedly paywalled the essays after 6 months.

The new Zeran v. America Online ebook restores the 2017 essay package into a new and easy-to-read format. Together, they are a great entry point into the debates about Section 230, including how we got here and what’s at stake.

To supplement the essay package, the ebook compiles an archive of the key documents in the Zeran v. AOL litigation (with bonus coverage of Zeran’s case against radio station KRXO). Many of these materials have not previously been publicly available in electronic format. The case archives should be of interest both to historians and students of precedent-setting litigation tactics.

Section 230 will likely remain hotly debated, but the debates won’t be productive until we develop a shared understanding of what the law says and why. Ideally, this ebook will advance those goals.

The book’s table of contents:

How the Scam Artists at Stratton Oakmont Made ‘Zeran’ Possible and Unwittingly Saved the Internet
Robert J. Butler

The First Hard Case: ‘Zeran v. AOL’ and What It Can Teach Us About Today’s Hard Cases
Cathy Gellis

The Satellite Has No Conscience: §230 in a World of ‘Alternative Facts’
Laura A. Heymann

The Non-Inevitable Breadth of the ‘Zeran’ Decision
Samir C. Jain

The Judge Who Shaped the Internet
Jeff Kosseff

The UK’s Broad Rejection of the §230 Model
Gavin Sutter

‘AOL v. Zeran’: The Cyberlibertarian Hack of §230 Has Run Its Course
Olivier Sylvain

CDA 230 Then and Now: Does Intermediary Immunity Keep the Rest of Us Healthy?
Jonathan Zittrain

Zeran v. AOL (E.D. Va)
Memorandum in Support of Defendant’s Motion For Judgment on the Pleadings

Zeran v. AOL (E.D. Va)
Brief in Opposition to Defendant’s Motion For Judgment on the Pleadings

Zeran’s Petition for a Writ of Certiorari

Opposition of America Online, Inc. to Petition for a Writ of Certiorari