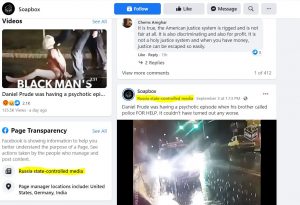 Maffick publishes millennial-friendly videos on Facebook pages titled “In the Now,” “Waste-Ed” and “Soapbox.” See this CNN article for some background. Facebook added its new “Russia State-Controlled Media” label to their pages (see today’s screenshot on the right; I added the highlights). Maffick responded with a lawsuit alleging defamation and related claims, and it sought a TRO against the label. The court rejects it.

Facebook, on its part, has tendered a substantial amount of evidence in support of its view that Maffick is linked to the Russian government. For example, Facebook has established, without dispute by Maffick, that a prior entity, Maffick Media GmbH (“Maffick Media”), openly acknowledged significant ties to the Russian government. Maffick’s Soapbox, Waste-Ed, and In the Now channels on Facebook are virtually identical to the same channels Maffick Media previously sponsored under the same names. Maffick still uses Maffick Media email addresses for these channels — “hello@maffick.media” for In the Now; “waste-ed@maffick.media” for Waste-Ed; and “soapbox@maffick.media” for Soapbox.  Maffick’s current CEO, Anissa Naouai, expressly stated in a declaration accompanying the TRO application that she “owned a 49% interest” in Maffick Media, and that another “part-owner” was an entity known as Ruptly GmbH. Facebook submitted evidence that Ruptly is a subsidiary of RT (formerly Russia Today), which is “funded by the Russian government.” A “2017 report from the U.S. Director of National Intelligence about Russia’s meddling in the 2016 U.S. presidential election” stated that “RT is considered the ‘Kremlin’s principal international propaganda outlet.’” When Facebook temporarily suspended these pages in February 2019, “RT’s editor-in-chief, Margarita Simonyan, tweeted…: ‘Facebook has blocked our projects with billions of views!!!’” Naouai’s reply declaration also states that while she is a United States citizen, she lived for years in Moscow, was employed by Russia Today, and hosted an opinion show for RT called “In the Now.”

This is a considerable amount of evidence in Facebook’s favor, and Maffick does not meaningfully contest it.

Instead, to counter Facebook’s evidence, Maffick’s CEO offered “purely conclusory statements to the effect that Maffick is free and clear of Maffick Media and Russia…. In effect, Maffick contends that it is likely to succeed on the merits because its CEO says so.” The judge says this self-attestation is not enough to merit the extraordinary remedy of a TRO. The judge also says that any traffic drop suffered by Maffick can be compensated through money damages. Furthermore:

The balance of the equities tips in Facebook’s favor, if anything. As the Ninth Circuit concluded in Garcia, the plaintiff’s “thin copyright claim” did not outweigh the “historical and heavy presumption against” prior restraints. So too here, where Maffick asks to restrain Facebook’s speech on uncompelling evidence of falsity. The Court also notes the public interest served by Facebook’s notices to “help its users better understand the sources of news content they see on Facebook” which can help them “make informed decisions about what they are reading.”

Indeed, I actually appreciate Facebook’s additional disclosure about content source. The labeling doesn’t solve every problem with non-credible sources, but perhaps it might help clue me into some foreign malefactor manipulation.

This lawsuit fits into the broader debate about anti-spam/anti-spyware/anti-malware efforts. Just like content producers don’t like being called Russian trolls (even if it ends up being true), producers of spam/spyware/malware don’t like being called out either (not even something non-committal, like “potentially unwanted program”/PUP). As a result, these enterprises use litigation, or the threat thereof, to “work the refs.” That is counterproductive because we expect intermediaries to give us their honest opinions, not to bend their standards due to litigation fears. I see Section 230 and anti-SLAPP laws as helpful bulwarks that create some litigation-free zones for intermediaries to serve their consumers more vigorously.

This ruling doesn’t resolve whether the current Maffick enterprise is actually a Russian troll operation. However, if it is, I don’t understand why its lawyers (John Ulin and Amy Nashon Stalling of Troy Gould) would choose to represent such an enterprise.

Finally, if you actually engage with Maffick’s Facebook pages, why? I encourage you always to reflect upon the content you consume and its producers’ agendas.