This case involves a Twitter thread discussing the plaintiff’s alleged misconduct as a lawyer. I’m still looking for the original thread (some or all of it appears to be deleted based on my attempts to find it on Twitter) or an accurate copy. [UPDATE: the judge amended the opinion to add screenshots. This one shows the thread.] Based on my reading of the court’s description, the thread started with tweets reporting on a judge’s criticism of the plaintiff’s handling of a matter in court and suggestion that the plaintiff would be subject to disciplinary action.

A third-party replied to (one of?) those earlier tweets: “July 2019 story. But what happened to her since?”

The defendant replied with the zipper-mouth emoji (🤐).

A third-party replied: “Judge Wilson recommended Ms Burrow’s clients be banned for life by ASIC and prosecuted for signing affidavits they knew to be false,” including “document stubs” (apparently, links to external articles?), hashtags, and the words “tick-tock” followed by a clock emoji (maybe 🕒?)

A third-party retweeted the defendant’s zipper-mouth emoji and added the  “collision”, “tears of joy” and “ghost” emojis (💥😭👻). The court’s depiction of the ghost emoji looks different than the one I depict because one arm is raised up. 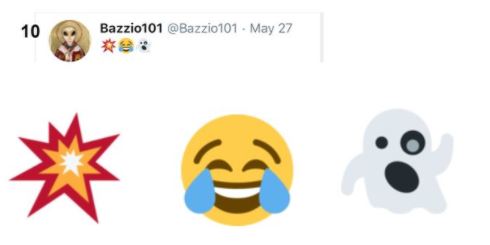 A third-party retweeted one of the prior posts (not specified which one) with comments, saying  “Ohmigod bro !!!!!”

[UPDATE: from the court’s exhibit, this appears to be the key thread:]

Citing the Oxford English Dictionary, the court defines an emoji as “a small digital image or icon used to express an idea, emotion, etc., in electronic communications.” A number of US courts have adopted this definition or a virtually identical one.

The opinion says: “This appears to be the first time that a court in Australia has been asked to rule on the capacity of an emoji to convey defamatory meaning, so it is a topic which I should approach with some care.” 👏👏👏

The court discusses the process to interpret emojis:

Because this conversation took place on Twitter, the court only shows the Twitter emoji depictions. The court doesn’t address whether people reading Twitter on their mobile devices could have seen different emoji depictions substituted in by their device’s operating system. For example, emoji sets vary quite a bit in how they depict the ghost’s arms; because the arm-raise is central to the court’s interpretation of the ghost emoji, a different depiction (if there was one) should affect the court’s ascribed definition.

Does a Zipper-Mouth Emoji Defame the Plaintiff?

The central question of the opinion is whether the defendant’s laconic zipper-mouth emoji, as a reply to a request for updates on the disciplinary proceedings, constitutes a defamatory statement. The court says it could:

39. Mr Rasmussen [the plaintiff’s lawyer] submits that this “zipper-mouth face” is worth a thousand words – the emoji implies that there has been a finding damaging to the plaintiff, but the defendant is not at liberty to disclose the result, and instead must hint at it by posting the newspaper story from the previous year and using the “zipper-mouth face”, so the reader can guess the rest.

40. …Mr Rasmussen submits that this Delphic response is the equivalent of shouting “fire” in a crowded theatre [apologies to Mike Masnick and everyone else who knows the fire-in-a-crowded-theater analogy is garbage], giving rise to a defamatory meaning which is further inflamed by the three following comments.

41. Viewed in the context of the reply sent by the defendant, the “zipper-mouth face” picks up on both aspects of the inquiry – the fact that the defendant is posting an article almost a year old and the result of the events the subject of the stub. This is a case where “joining the dots” (Joukhador v Network Ten Pty Limited [2020] FCA 746 at [43]) to achieve the meaning is a particularly likely exercise when carried out on a social media site, where the exchange of such information is more likely than a serious publication to contain hints of a sensational nature.

42. In all those circumstances, the imputation pleaded, namely that the plaintiff has not merely been the subject of a referral, but also a result adverse to her, is reasonably capable of being conveyed.

For reasons that are unclear to me, the court talks about other statements in the thread. Is this because Australian law creates the possibility that one Twitter user can be liable for the defamation by other Twitter users? Or is the court trying to pick up multiple defamatory statements that were all reified by the use of the zipper-mouth emoji? I can’t tell.

As for an allegation that the plaintiff’s clients falsely signed an affidavit, the court explains:

45. I am satisfied that the ordinary reasonable social media reader would infer that, while the clients “signed” the false affidavits, the plaintiff, who was a solicitor reported to be in trouble with the judge, would also reasonably have been seen to be in trouble for her role in the preparation of the offending affidavits and/or their presentation to the court. This is underlined by the words “tick tock” and use of the “clock face three o’clock” emoji, which infer that the plaintiff’s time (in terms of being dealt with for her wrongdoing) was up.

46. The third and fourth posts [the collision/tears of joy/ghost tweet and the ohmigod tweet] add further emoji and comment to the defendant’s post when they retweet it. They reinforce that the plaintiff’s conduct is extremely serious and the subject of professional sanctions.

The para. 46 discussion is particularly interesting because the court is using third-party emoji reactions to gauge how others contemporaneously interpreted the conversation. So in this sense the emojis function as extrinsic evidence of the prior statements’ meaning. The defendant should be able to provide other non-defamatory explanations for the crowd’s reactions, so again, the court only decided that one of the possibly multiple meanings had the capacity to defame.

Overall, I think the judge did a good job assessing emoji meanings–relying only on her intuition and Emojipedia, and not on any expert testimony. (Apparently, she’s had a long-standing interest in social media). The zipper-mouth emoji has a lot of possible meanings, but the judge did identify one non-frivolous meaning that could be defamatory. The ascribed meanings to the other emojis are also credible.

In a US court, some judges would have nevertheless dismissed the defamation case unless the plaintiff provided more proof that the defamatory meaning was likely, not just possible. I’m not sure what Australian pleading standards require of a defamation plaintiff. In a California court, it’s possible/probable that the lawsuit would have been struck down under CA’s strong anti-SLAPP law because the parties were seemingly discussing a matter of public concern (an attorney’s discipline for allegedly serious misconduct in court); and the plaintiff would have needed better evidence to overcome the burden-shift required by CA’s anti-SLAPP law. Just a reminder that anti-SLAPP laws have many benefits, and we still need a federal anti-SLAPP law.

This case reminds us of the omnipresent dangers we face whenever we as legal commentators report on or discuss the activities of plaintiffs or their lawyers. By definition, they have a proven track record of suing people, so they pose a higher-than-average risk of deciding to sue *you*. The relatively mundane Twitter chatter about an attorney’s disciplinary proceedings surely seemed innocuous enough at the time, but I’ve been threatened with defamation lawsuits based on far less. It’s all fun and games on Twitter until someone gets sued. Think before you tweet.

Finally, this case implicitly answers the question of whether you can be sued for using emojis. It’s always been clear the answer is yes, but this case puts that answer in sharp relief. A single emoji, with nothing more, served as the grounds for a defamation lawsuit that apparently survived a motion to dismiss. The defendant will be spending a fair amount of money defending his use of a single emoji. I love emojis, and I encourage you to keep using them–but remember that you own your words, and you own your emojis too.

← Want to Know What I Did This Summer? A Roundup of My Projects During the Pandemic Summer
Want to Write a Story About Tardigrades in Space? Make It So!–Abdin v. CBS →
Subscribe to Blog via Email
Categories