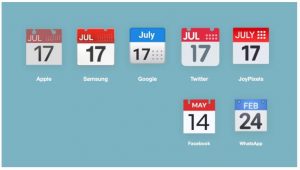 Tomorrow is World Emoji Day (named because most calendar emojis depictions show July 17 on the calendar). To celebrate the power of emojis, I’m blogging a case where emojis helped a teen avoid jail.

DRC and her mom were having a fight–which isn’t unusual for parents and teens, though this incident sounded a little more dramatic than the disagreements in my household. During the incident, DRC texted her friend Joshua the following thread (apologies for the kind of language I don’t normally condone on the blog):

[My RA Jess points out that “bet” in this context probably meant “for sure.”]

DRC also engaged in a text thread with Lexy:

After the incident, the mom looked at DTC’s cellphones and saw these two threads and plus a third prior thread with Lexy: 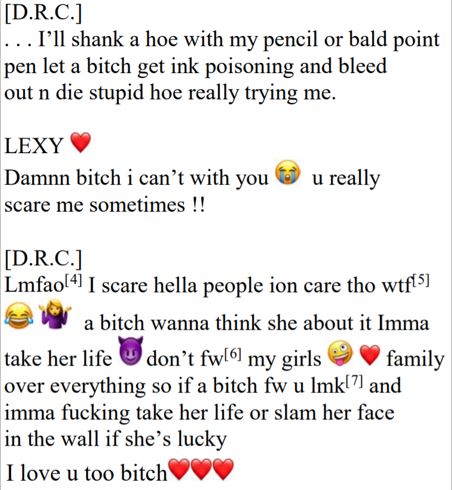 Mom was frightened after seeing these threads, and she took some precautionary measures against a possible physical attack by DRC. The lower court convicted DRC of making a true threat against her mom.

To determine if DRC made a true threat, the appeals court applies the following legal standard: “whether a reasonable person in the speaker’s position would foresee their statement would be interpreted as a serious expression of intent to cause physical harm….we look at the speaker’s actual intended audience, not a reasonable audience or an unintended recipient.” (Compare the standard just articulated by the Colorado Supreme Court).

This standard focuses on what Joshua and Lexy thought about DRC’s statements, not how the mom felt/responded because she wasn’t the intended audience. Joshua and Lexy didn’t testify at trial.

Nevertheless, the court says Joshua’s responses indicate that he thought the conversation was joking, as signaled by the “lol.” Even if Joshua thought DRC was being serious, DRC’s tweet with the “rolling on the floor laughing” emoji should have disabused him.

In the contemporaneous thread with Lexy, the line “Imma fucking kill this bitch” looks pretty damning, but the court says it was preceded by a “laughing with tears of joy” earlier in the thread; plus, “parent-child conflict is the type of circumstance commonly associated with teenage frustration, but not homicidal ideation.” (As a parent of two teens, I’ll note that frustration can run in both directions).

I think the court was a little generous in interpreting the grammar this way. Normally, a meaning-flipping emoji comes at the end of text or, in rare cases, immediately preceding it. Even so, the emoji supported the court’s overall narrative that DRC was not serious throughout the exchange.

The earlier thread with Lexy provided evidence that DRC “tended to use hyperbolic language with her friends.” (An axiomatic statement about all teens, all the time, throughout history). The earlier thread was peppered with “LMFAO” and emojis in the context of discussing murdering people. (They reminded me of the In re JP case, with an extended non-serious conversation about murdering someone’s goldfish). The court says the “combination of the initialism and emojis conveyed an unmistakable message of sarcasm, as opposed to a serious intent to cause harm or death.”

Interestingly, the court doesn’t acknowledge Lexy’s statement that “u really scare me sometimes !!,” which could be a signal that Lexy did, in fact, worry that DRC was being serious in her seemingly hyberbolic celebrations of murder. Furthermore, DRC responded “I scare hella people,” which could indicate that DRC subjectively knew that her texts are likely to scare recipients. Still, to me, and perhaps to the court, the transcripts read like typical teenager nonsense chatter, and that helps explain why the court didn’t overweight these seemingly inculpatory statements.

The opinion concludes: “the First Amendment protects all sorts of speech, even when the sentiment is hurtful or vile.” Still, “D.R.C. would do well to heed the advice of the juvenile court judge and find a peer group that does not consist of ‘mean girls.'”

I like this opinion for several reasons. First, it helpfully adds to the canon of how to apply formal legal rules to teens doing stupid teen things online. We cannot hold teens to the same conduct standards that govern adults.

Second, this case is a significant contribution to emoji law. It is possible, or even probable, that the court would have convicted DRC without the emojis, so the emojis directly affected the outcome. That’s different from 90%+ of the emoji cases I see, where the emojis are part of the evidence but are otherwise ignored by the courts.

Furthermore, the court appreciated how emojis could flip the meaning of the surrounding text. That’s not novel; other courts have similarly recognized the meaning-flipping power of emojis (see, e.g., United States v. Christensen, 2013 U.S. Dist. LEXIS 52464, at *5 (D. Mont. Apr. 11, 2013)). Nevertheless, the stakes here were higher than in most costs. The emojis literally kept DRC out of jail.

Third, the opinion displays the emojis, rather than just summarizing them textually. Hooray! It would have been better if the opinion showed the emojis in pairs (what DRC sent and what the recipients saw), but still, props for showing us the emojis at all–and in context. Bonus props because the court correctly textually defined the emoji symbols and gave a definition of “smiling face with horns,” which is “used to convey playful mischief” (according to Dictionary.com and Emojipedia). The court also defined some of the abbreviations, like LMFAO, WTF, and LMK. Good stuff.

Protip: “jokes” about murdering people made in private online conversations never look as funny to unintended audiences, like law enforcement and judges, as they may have felt at the time. The court denigrates DRC’s conversations as “odious expressions of frustration” and “distastefully violent” and found “nothing funny in the texts.” THINK BEFORE YOU TEXT!