The state unsuccessfully prosecuted Cook for drug offenses. “Not content to quietly accept his victory, Cook made disparaging remarks on the internet about various players in his Calhoun County prosecution.” The government prosecuted him again, this time for the federal cyberstalking. The indictment claims Cook threatened a narcotics agent, Lepicier, and doxxed his family. However, “when you compare the ‘posts’ the government presented to the grand jury in the indictment, to the full posts…it appears that the government ‘cherry picked’ certain statements and re-arranged them in a different sequence and context to give the posts a more ominous effect.” Government prosecutors, working to advance the public’s interest, would never cherry-pick evidence, would they???

The centrality of Cook’s social media posts to the prosecution raises the common question of whether the prosecution relates to conduct or content. In this case, the court says “Cook is being prosecuted solely on the content of his public posts – not the act of posting.” Thus, the court looks to see if the prosecution fits into one of the First Amendment exceptions. It does not.

Cook’s posts, when read in context, lack entirely the specificity required to bring them under the umbrella of a true threat. Nowhere in any post does Cook explicitly state that he plans to physically harm Lepicier, or any other named public official.” God willing I’m going to take them out” is not the same as telling an FBI agent you have a pistol and you will use it to kill the president or repeatedly and directly telling another person in a chat room that you were going to kill the students in your high school while making references to one of the Columbine shooters…. Cook’s phrase, when read with the succeeding sentence regarding the help of the people, could be interpreted to mean that he wishes to “take them out” of office or their positions of power based on the context of the entire post being about the “fraudulent indictment scheme” or “BUFI” that Cook seemingly is warning the public about. When read in context, Cook’s posts are nothing more than a manifesto of his grievances regarding people and processes which he perceived to have wronged him; they do not rise to the level of true threats.

The court adds that doxxing, “while potentially offensive and disagreeable,” isn’t a true threat either.

The First Amendment further protects Cook’s remarks because they relate to matters of public concern. His remarks all related to government officials, and Cook nominally sought to expose their alleged misconduct:

While the Court does not find it to be in good taste to post publicly available identifying records, “poems” written which vaguely reference information known about employees of public entities, or to use phrases like “and god willing I’m going to take them out,” the Court recognizes that Mr. Cook does have the constitutionally protected right to say such things. 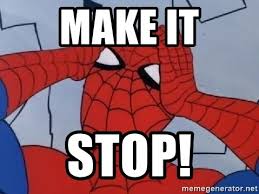 As support that rough-and-tumble comments on public matters are acceptable nowadays, the court cites Pres. Trump’s tweets that doxxed the jury forewoman in the Roger Stone case and metaphorically (?) said that John Bolton “will have bombs dropped on him.” In what the court seemingly thinks is a convincing argument, the court says:

If prosecutors choose to tolerate the above grievances coming from the highest office in the land, then surely a Calhoun County citizen should likewise be allowed to vent his grievances. Their complaints are cut from the same cloth. Otherwise, our criminal justice system suffers the appearance of selective enforcement.

Ugh. This made me want to cry. The judge is clearly lamenting the obvious prosecutorial double standards emerging in the DC swamp’s ever-expanding law-free zone (which exists only for those who know the right people and have the right privilege). There are good reasons to be concerned about our government’s seemingly systematic campaign to destroy the “rule” of law. However, the court’s remarks don’t productively support this point. First, prosecutors may not be prosecuting Trump for his criminal conduct (including his tweets) because there is some uncertainty whether they would have standing to do so. Second, and more importantly, the degradation of our society’s conversations isn’t something to celebrate, even as a debater’s point. Trump’s words continue to hurt our country, and we should not let a toddler-in-chief set the level of acceptable behavior in our society. (Remarkably, this isn’t even the first time this year that a judge has cited Trump’s puerile tweeting in a defendant’s favor, reiterating that judges are indeed adjusting the legal standards they apply in their courtrooms). The prosecution against Cook clearly had undertones of malicious and abusive retaliation for Cook’s public criticisms, and that’s a good reason to question the prosecution’s legitimacy. The fact that our president routinely makes criminal statements–and gets away with it–is not.