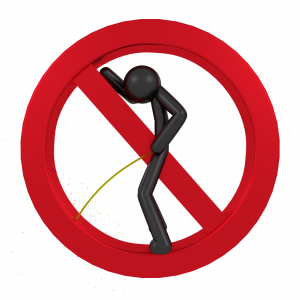 Fyk posted pissing photos and videos to Facebook. Apparently he made some good money from it. Facebook blocked his content. With the (likely expensive) help of four lawyers, he sued Facebook in a lawsuit celebrated on Fox News. (Yes, Fox News rallied in support of pissing videos. Another reason why I think they are a flaming pile of garbage). The district court ruled for Facebook on Section 230(c)(1) grounds. The Ninth Circuit affirms in an unpublished opinion issued without oral argument, highlighting how Fyk’s lawsuit was never close. As a bonus, the short opinion refutes many of the standard “conservative” attacks on Section 230.

The court analyzed Section 230’s standard 3-element prima facie requirements. Fyk admitted Facebook was an ICS provider. He didn’t challenge the publisher/speaker treatment, but the court reinforces that “it is clear that Fyk seeks to hold Facebook liable as a publisher for its decisions to de-publish and re-publish the pages.” Cite to Barnes v. Yahoo, which said “removing content is something publishers do.”

Fyk challenged the “another information content provider” element, saying that Facebook became a “content developer” by “de-publishing pages that he created and then re-publishing them for another third party after he sold them to a competitor.” This argument implies that Facebook hypocritically implemented its editorial standards. Partially quoting Kimzey v. Yelp, the court says “republishing or disseminating third party content in essentially the same format does not equal creation or development of content.”

The fact that Facebook may have acted for “monetary purposes” doesn’t change the result because “nothing in § 230(c)(1) turns on the alleged motives underlying the editorial decisions.” Section 230(c)(1)’s bypass of publisher motivations is a key reason Section 230 is better than the First Amendment.

Echoing the rallying cry of “conservatives” around the Internet, Fyk claimed that Facebook “discriminated” against him. (Reminder: we are talking about pissing videos). The court says Section 230(c)(1) has never adopted an anti-discrimination rule.

Instead, Section 230(c)(1) encourages online publishers to exercise their editorial discretion, and that ensures the publishers will “discriminate” against some content in favor of other content. (Section 230 also applies to Title II discrimination claims, but this case doesn’t raise those issues). It’s become “conservative” dogma that Section 230 should fall away when online publishers exercise editorial discretion, ignoring Section 230’s actual raison d’être. As Matthew Yglesias recently tweeted, “Section 230 seems unique in that the law is frequently described as saying literally the opposite of what it actually says.”

The court reiterates that “As to Facebook, Fyk is ‘another information content provider.'” Cite to Sikhs for Justice v. Facebook. This move–treating the plaintiff’s content as “third-party content” to the Internet publisher–baffles a lot of “conservatives” because they feel it makes Section 230(c)(2)(A) “mere surplusage.” Citing Barnes, the court responds:

It’s easy to get lost in the doctrinal weeds here, so let’s revisit the big picture. Fyk made good money posting pissing videos to Facebook. Facebook decided it didn’t want his videos on its site. Fyk responded by trying to legally compel Facebook to keep publishing his pissing videos. This appears to be the outcome a non-trivial minority of Americans want. #MAGA.