Fox News Is a Flaming Pile of Garbage, But You Can’t Sue Them for That–WASHLITE v. Fox News 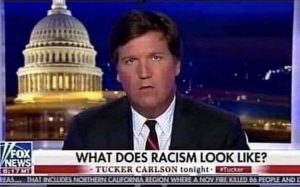 I can’t understand why anyone watches Fox News. Fox News isn’t a serious news organization. It has instead found a market niche for unwavering partisan disinformation. As Prof. Yochai Benkler (Harvard Law) showed in a comprehensive study of disinformation in the 2016 presidential elections, Fox News, not social media, was the prime villain.

I could see how some folks view Fox News as entertainment, but only if they enjoy watching terrible people spew mean-spirited and hateful things. Unfortunately, some viewers–to their detriment–misapprehend Fox News as news (it’s in the name!) instead of entertainment.

[For the Fox News loyal fans bashing me in the comments, I reiterate that Fox News itself admits that it’s not news: “Fox News lawyer tells judge that Tucker Carlson’s audience doesn’t expect him to report the facts.”]

In late Winter 2020, Fox News–for weeks–loudly denigrated the risks associated with COVID-19 (even as Fox News treated the virus quite seriously internally), which encouraged people to make life-threatening decisions. Fox News’ gaslighting on COVID-19 likely directly killed thousands of Americans who would still be alive if they (or someone around them) had just changed the channel.

Given Fox News’ culpability in these avoidable deaths, many people were excited to see a lawsuit against Fox News for its COVID-19 misinformation/disinformation. Unfortunately, this prompted some well-meaning people to acquiesce to the lawsuit’s blatantly pro-censorial implications. Fortunately, the court didn’t take that bait.

To get around the obvious Constitutional problems with its lawsuit, WASHLITE argued that cable broadcasters categorically lack First Amendment rights. Right away, that argument should freak you out, because it would strip First Amendment protections for every cable broadcast, not just flaming pile-of-garbage faux news shows. Fortunately, it’s not even close to the law. The court responds gently, “[t]hese assertions do not hold up to scrutiny…WASHLITE’s attempt to distinguish cable programmers from other media providers is not supported by the relevant caselaw.” The court cites to two messy 1990s-era Supreme Court precedents, Turner Broadcasting and Denver Area Educ. Telcoms. Consortium.

WASHLITE further argued that the First Amendment doesn’t protect lies. Though that sounds intuitive, it’s actually wrong because because we sometimes protect false statements to provide a buffer around the production of truthful information. “The speech in this case involves matters of public concern that is at the heart of the First Amendment’s protection…Washington courts have previously rejected attempts to use the CPA to punish speech made by the media.”

We still don’t know everything about COVID-19, and some speculative theories and preliminary results will prove to be wrong as we triangulate towards the truth. While Fox News’ behavior is inexcusable as a news organization, other news organizations–that are actually credible–very well could have legitimately explored the same ground as part of the early and inchoate public discourse about what’s happening and how to fix it. We have to protect those inquiries if we’re going to get to the right result eventually.

That means the First Amendment protects Fox News’ “entertainment” as well, as odious as it may be. The court explains:

In many of the United States Supreme Court’s seminal First Amendment decisions, the motives for seeking to curtail or prohibit speech were understandable and could be considered righteous. Yet, as the Supreme Court recognized, “If there is a bedrock principle underlying the First Amendment, it is that the government may not prohibit the expression of an idea simply because society finds the idea itself offensive or disagreeable.”

← My Galley by CJR Interview on Trump’s Anti-Section 230 Executive Order
What is a “True Threat” Online?–In re. R.D. →
Subscribe to Blog via Email
Categories