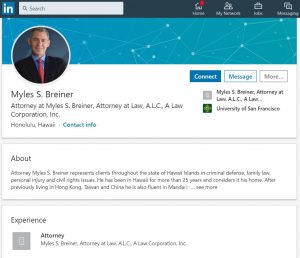 Juror #1 was empaneled on a trial. Myles Breiner is one of the plaintiff’s lawyers. On the 6th day of trial, Breiner sent Juror #1 an invitation to connect on LinkedIn. Out-of-court interactions between jurors and the litigating lawyers is a big no-no. Juror #1 duly reported the contact to the judge.

The judge investigated what happened. Breiner claimed he was preparing for closing arguments while sitting through testimony in the trial. As part of that, he did background research on the jurors on his cellphone. He claimed that he searched Google for Juror No. 1’s name and found her LinkedIn profile, which he clicked on. His declaration then explained:

The court is not impressed by this explanation, saying that “Mr. Breiner’s verbal and written statements to the Court were neither complete nor forthright.” The court says Breiner should have self-reported the violation immediately.

The court doesn’t buy Breiner’s claim that he didn’t have a LinkedIn account. Breiner apparently had two LinkedIn profiles (one screenshotted above); and the one he used to contact Juror No. 1 had 12 connections. The court says “even if Mr. Breiner was completely unaware that he had 12 connections through one of his profiles, he should have at least double-checked his LinkedIn status before submitting two declarations about it.”

The court also wasn’t thrilled about Breiner’s in-court multi-tasking: “the purpose for conducting research on Juror No. 1 while in court—with a witness on the stand—escapes the Court.”

The court concludes that she “is concerned by the recklessness with which Mr. Breiner acted and approached his reporting to the Court,” and adds in a footnote that Breiner’s conduct in the courtroom “has been less than professional.” Still, the court says his behavior wasn’t bad faith and thus not sanctionable. Instead, the court slaps Breiner on the wrist, saying he can’t use his electronic devices during trials in her court.

For reasons I don’t grasp, LinkedIn seems to baffle users more than Facebook or Twitter. I’ve lost track of the number of times I’ve seen an “I didn’t understand LinkedIn” defense in court. Most states have adopted a duty of technological competence for lawyers, though the duty seems mostly honored in the breach. In 2020, it’s amazing that any attorney doesn’t understand LinkedIn’s basic operations or hasn’t completed a LinkedIn profile (at least in part). I doubt any reader of this blog falls in those categories; but if you do–it’s 2020, not 2011, so get with it.