This lawsuit alleges that social media providers contributed to the 2016 Pulse Nightclub terrorist attack in Orlando that killed 49 people and injured dozens more. If that sounds familiar, that’s because those facts formed the basis of the Crosby v. Twitter litigation from Michigan, which failed in the lower court in 2018 and then on appeal to the Sixth Circuit in 2019. In a litigation move I’ll charitably characterize as tenacious, after the emphatic loss in the 6th Circuit, the plaintiffs’ lawyers immediately recruited new plaintiffs and filed a new lawsuit in Florida over the exact same terrorist attack. The do-over attempt works about as well as you would expect.

The court first criticizes the plaintiffs’ lawyers. The court says that the Florida lawsuit is essentially the same as the Michigan lawsuit, so the court basically says “see Crosby.” The court also doesn’t love the recycled complaint:

For what Plaintiffs’ TAC lacks in substance it makes up for in volume. The TAC is 730 paragraphs and 150 pages long. The length of the TAC itself is likely a violation of Federal Rule of Civil Procedure 8….For example, the Court finds Plaintiffs’ thirteen-page, seventy-one paragraph dissertation on the history of ISIS—complete with inflammatory graphics—to be almost entirely unnecessary to the substance of the claims. Surely, the TAC is neither short nor plain.

You may also recall that the court previously criticized the plaintiffs’ lawyers for violating local court rules in formatting the complaint, literally measuring the line spacing: 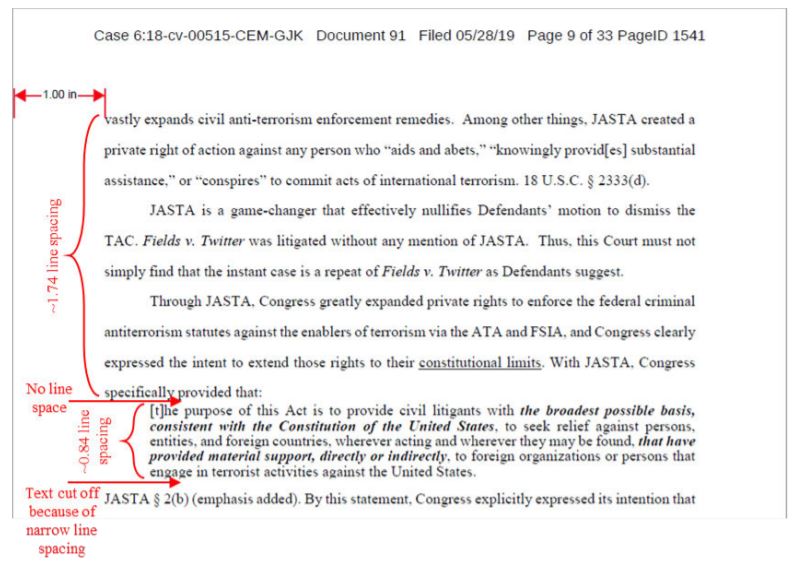 Lack of Causation. The Pulse Nightclub shooter self-radicalized, and ISIS took credit only after the shooting. Those disconnected facts are enough to take the social media defendants out of the causation loop.

Not International Terrorism. The shooting took place in the US. Even if ISIS took credit ex post, that doesn’t make the shooting an act of international terrorism. Instead, this is one of the overwhelming number of acts of domestic terrorism in the past few years.

Leave to Amend? The plaintiffs have made 6 attempts to properly plead the complaint–two in Michigan, and four in Florida. Yet, the court reserves judgment about whether to let plaintiffs amend one more time. Really? In my court, this would almost certainly be sanctions time.

← My Third Set of Comments to the CA DOJ on the CCPA Regulations
Redbox’s Terms of Use Fail (OUCH)–Wilson v. Redbox →
Subscribe to Blog via Email
Categories