Bell authored a book called “Winning Isn’t Normal.” He got a copyright registration for the book and a separate registration for a 241 word passage from the book (I won’t include that passage here for reasons that soon will be obvious). Bell claims this passage is the heart of the book. 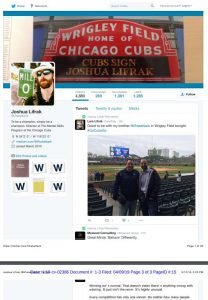 Lifrak was the director of the Chicago Cubs’ mental skills program (apparently he’s now an independent consultant). In May 2016, Lifrak retweeted the Moawad post to his then-1,000 followers, which generated 9 retweets and 14 likes. Bell sued Lifrak and the Chicago Cubs for copyright infringement. The defense sought a 12(b)(6) motion to dismiss, which the court partially grants.

Direct Infringement. On a motion to dismiss, the court can’t decide if Lifrak’s retweet made a “copy” of Bell’s work. The defense cited Flava Works for the proposition that linking doesn’t create new copies of the linked work. Thus, the defense argued that “a retweet cannot, as a matter of law, generate an ‘actionable copy’ of copyrighted material, because ‘[t]he instructions, storage, management, and reflection back to the original tweet all were governed exclusively by Twitter and took place exclusively on Twitter’s servers.'” The court nevertheless denies the motion to dismiss because the complaint alleged that retweeting created new copies.

Contributory Infringement. The complaint doesn’t allege that the Cubs knew that the passage was infringing, so this claim is dismissed.

Vicarious Infringement. Bell properly recited the supervisory elements in his complaint. As for direct financial interest, the court says “it is not wholly implausible to presume that Lifrak’s Twitter activity is intended to promote the Cubs. At the same time, Plaintiff may find it difficult to marshal any actual evidence that Lifrak’s single retweet of the WIN passage resulted in a direct financial gain to the Cubs or actually drew customers to the Cubs.” The court expressly says it’s skeptical of the direct financial interest prong (it “barely” cleared the pleading bar) but lets the claim proceed anyways.

Willfulness. There’s no evidence the defendants knew that the passage contained copyrightable material, so the court rejects willful infringement.

Damages. The court issues the plaintiff a warning: “the Court is skeptical that Defendant will ever be able to establish knowledge or willfulness, given that the Moawad tweet did not attribute the WIN quote to Plaintiff. While this is not a basis for dismissing the complaint, it is certainly something for Plaintiff to keep in mind in considering how much of his own resources to sink into this case, as he will need evidentiary support for any claim to more than the $200 minimum statutory damages.” This appears to be legally incorrect. The standard statutory damages minimum is $750. The defense has the burden to establish that its infringement was innocent, and if the defense does so, the statutory damages floor lowers to $200. Maybe the court is saying that it thinks the evidence eventually will support an innocent infringement finding?

Either way, the court’s warning deserves Bell’s attention. The court is signaling that it’s inclined to give a low damages award here, so the odds are good that Bell will lose money on this litigation even if he wins on the merits. Maybe this litigation will become a vignette in his sequel to his “Winning Isn’t Normal” book.

Implications. There is only one right answer to the question of whether retweeting can constitute direct copyright infringement. It can’t. Otherwise, the world will burn up in a fiery ball of copyright lawsuits against retweeters (and yes, that will happen faster than global warming turning the earth into a charred cinder).

For example, remember the Ellen selfie? At the time, it was the most retweeted tweet ever. It has 3.1 million retweets. You may recall that we never resolved who owned the copyright to that image. It almost certainly wasn’t Ellen DeGeneres, so there is a possibility that Ellen infringed the copyright by tweeting the photo. If Ellen infringed, and if retweeting is copyright infringement, then the copyright owner would get 3.1M extra defendants, each potentially worth at least $750. I’m no math expert, but 3.1M retweets x $750/retweet gives that one image a potential minimum statutory damage value of $2.3B. That’s enough money to interest anyone. (I’m ignoring the 2.2M likes, which also cause the post to be republished on their Twitter account page and could be additional litigation gravy). Now, replicate this math across millions of retweeted copyrighted and you can see why I fear a dystopian future where the entire output of humanity is just copyright infringement lawsuits.

I last comprehensively addressed the question of linking-as-infringement after the Goldman v. Breitbart ruling, which troublingly held that in-line linking could be infringing. That case made my list of top Internet Law developments of 2018. I was hoping the Second Circuit would clarify the ruling, but the case settled before that. I see retweeting as the equivalent of linking, which means that this case has the potential to not only screw up retweeting, but also screw up broader questions about linking. Fortunately, the judge expressed enough skepticism about Bell’s case to give me a hope that we’ll avoid that outcome…at least in this case.

There is a lurking issue here about when an employee’s account is a personal account, an extension of their employer, both, neither, or something else. The court doesn’t directly address whether Lifrak posted within the scope of employment, but the court doesn’t rule out the Chicago Cubs’ liability either. This is Yet Another reminder that distinguishing between “employee” and “employer” social media accounts is a fool’s errand, even though a bunch of laws from the last decade cluelessly tried to do exactly that.