One of the most celebrated cases in emoji law is Dahan v. Shakaroff, an Israeli decision involving a landlord’s claim that prospective tenants Nir and Yarden (a married couple) engaged in bad faith negotiations over leasing an apartment. At issue was the following text message from Yarden to the landlord:

The text of this email roughly translates to: “Good morning [smiley] Interested in the house [emoji string] Just need to discuss the details… When’s a good time for you?”

Yarden and Nir never leased the house, and everyone agrees that the parties never formed a contract. Instead, the landlord sued for the equivalent of bad faith negotiation, a doctrine recognized in Israel but not in the U.S. Promissory estoppel also might be available in the absence of a properly formed contract, but the facts don’t support a promissory estoppel claim under U.S. law. An Israeli small claims court nevertheless held that the emojis signaled enough positive intent by Nir and Yarden to justify the landlord keeping the house off the market, and it awarded about $2,200 in lost rent to the landlord.

Because the case was in small claims court, the case wasn’t argued by lawyers and the opinion lacked some of the precision/polish that you’d expect from a higher-stakes case. Still, the emojis played a central role in the evidence and arguably tipped the case in favor of the landlord. As a result, the decision became an instant classic in emoji law, and it remains one of the more thorough and interesting emoji law cases to date. 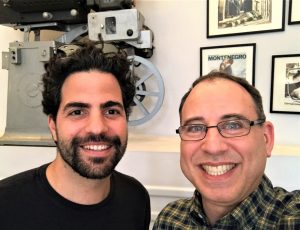 On a recent trip to Tel Aviv, I had the pleasure of meeting Nir face-to-face. He gave me an inside scoop on the case and especially the emojis, which I’m pleased to share with you here.

The case took place in the context of the competitive market for apartments in the greater Tel Aviv area. In central Tel Aviv, many leasing vacancies are never advertised. Instead, the existing tenant refers his/her friends to the landlord. So when houses or apartments are advertised, they are often snapped up quickly.

The house at issue here is in Herzliya, a northern suburb of Tel Aviv. Nir and Yarden were looking for a home that could accommodate their family, and each of them had specific requirements that made it challenging to find a house that satisfied both of them. The landlord advertised the home in an online classified forum, and Yarden toured the house and liked it. She then had Nir look at the house and he liked it too, though there were a number of renovations he considered mandatory. Because it was rare that Yarden and Nir both liked a place, Nir’s approval was a green light to Yarden to go forward. That led to the message above, in which Yarden’s enthusiasm about getting the green light was evident.

The landlord and prospective tenant still had to negotiate over the rental amount, the required renovations, and who would bear the cost of the renovations. Nir explained that coincidentally the landlord was a friend-of-a-friend and traveled in similar social circles, and that (loose) social connection aided camaraderie. (The landlord lived in a house behind the leased house, so perhaps that proximity also played a role in the discussions, though I’m not sure which way it cut). Still, according to Nir, the landlord was slow in sending the lease paperwork and the parties never codified their understanding of the renovation scope or financial responsibility. Eventually the conversations fizzled out without resolution.

Back to the emojis. Nir and Yarden both like emojis, and Yarden uses emojis heavily. I specifically asked about the meaning of each emoji in the above message, but Nir explained that wasn’t the right way to understand them. Instead, the six emojis—the Spanish dancer, the women with bunny ears, the V sign, the comet, the chipmunk, and the bottle with popping cork—were intended to signal Yarden’s excitement that she and Nir both liked the place and were interested in moving forward. Yarden likely chose the six emojis because they were prominent in her emoji keyboard—either as her most frequently or most recently used emojis. Though the chipmunk is not a frequently used emojis for most people, it may have been among Yarden’s top emojis due to her work on sustainability and ecology.

Thus, the six emojis were meant, in combination, to express Yarden’s excitement, something that any single emoji could not have done successfully. In this respect, the court opinion got it right. The emojis did signal Yarden’s positive outlook. However, the court maybe was wrong about the source of Yarden’s enthusiasm. It wasn’t a commitment to lease the house as much as excitement that Nir and Yarden finally had found something they both liked enough to pursue.

Yarden’s use of seemingly random emojis shows the difficulties that courts face interpreting emojis. This appears to be a place where a chipmunk emoji doesn’t mean chipmunk, or really anything at all. Instead, the chipmunk was part of a broader statement of happiness expressed idiosyncratically, where the emojis only make sense as a package but not using any grammar to sequence them. We should add this type of combinatory emoji meaning to the list of ways that emojis are used. Still, it feels like it will take a while before courts confidently analyze emoji combinations in any rigorous way.

Though Nir and Yarden lost the case, I don’t see the ruling as a cautionary tale about the use of emojis. As usual, you should always say what you mean and mean what you say, and that includes emoji usage. Nevertheless, Nir told me that his experience with the case has prompted him to be clearer in his business dealings to document expectations in writing. Perhaps that’s an expensive lesson, but I told him that his lawyers will love him for that.