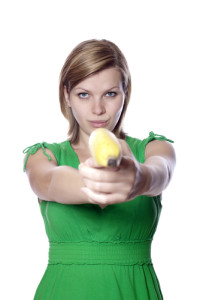 You might be amazed by how many photos of women using bananas as guns are in the ShutterStock database. Then again, check out the Banana Lady’s own photo. Photo credit: Pretty girl in a green dress is holding a banana as a gun // ShutterStock

Catherine Conrad is the “Banana Lady” (see her Facebook photos) who delivers singing birthday telegrams. I didn’t know such things still exist, but perhaps they do in the Midwest (she’s based in the Madison, Wisconsin area). For reasons the court didn’t explain, she was invited to perform at the 2011 CUNA Management School, an annual conference of the Credit Union National Association. I don’t know what’s considered “entertaining” at trade conferences in the financial industry, but it blows my mind that a conference organizer apparently thought it would be fun to bring in the local Banana Lady to entertain this presumably-national audience.

[Note: if you can stomach it, you can watch her videos that give a taste of her schtick. For example, this video of her self-proclaimed “world famous” Banana Shake, with its helium-voiced “rapping” and deliberately (?) grainy resolution reminiscent of a 1980s homemade video, made my eyes water in pain. I tried watching the other videos but I could only “enjoy” a few seconds of each before I started hallucinating about punching the monkey or wondering what might happen if the Fruit Ninja magically appeared. I can’t imagine this schtick would appeal to adults, so either she used a completely different act for a trade conference audience or everyone understood that the audience would be laughing at her, not with her.]

To her credit, the Banana Lady was clear with the conference organizers about her expectations. She told her handler that her character was protected by federal copyright and trademark law, so she didn’t want conference attendees posting photos or videos to the Internet without paying a license fee. Everyone reading this post knows what should have happened next: the conference handler should have told her to split. Whether they are laughing with her or at her, conference attendees will not be able to resist memorializing their encounter with the Banana Lady and sharing it with each other and their friends. Thus, thinking the Banana Lady could perform before a presumably large trade conference audience and not have photos/videos show up on the Internet is so nutty that I wouldn’t hire anyone who made such an unreasonable request.

One C&D recipient, Streeter, gagged on this demand and flamed the Banana Lady in response, threatening (among other things):

I will warn future classes that your company has asinine rules about being able to post pictures and photos and will encourage them to seek other companies who are friendlier to the buyer. Furthermore, I will pass your litigious email to other friends and family I have in the Madison area and warn them that if they do business with you, expect to get heavy handed emails and threats.

In response to this email, the Banana Lady sued Streeter, his employer, and eventually a bunch of other defendants…including her conference handler (talk about biting the hand that feeds you).

Fortunately, the Wisconsin appellate court mashed the lawsuit on a motion to dismiss. Her defamation claims reflected an overreading of the email’s words. Her publicity rights claim failed because she couldn’t show that anyone used photos/videos of her in ad copy. Her trademark claims failed because no one would assume that a person posting photos or videos of a Banana Lady singing at a trade conference was affiliated with the Banana Lady:

Rather, the only reasonable inference from the facts alleged in Conrad’s complaint is that the CUNA Management School website displayed photographs and videos of an event that occurred at the conference, that is, the performance of the “Banana Lady” singing telegram.

Finally, her copyright claim failed because she sued in state court.

This case reminded me a little of Zacchini v. Scripps-Howard Broadcasting, involving the publication of a 15 second video showing a human cannonball act. The Supreme Court in that case held that the publication violated Zacchini’s publicity right because it showed the whole act and thereby presumably suppressed the audience’s demand to see the act live. I’ve always disliked that case’s result (mostly because the broadcasters published the video in an editorial context), but this case is different. Without having seen her act, I don’t know if a video would spoil all of the fun (at least, compared to how the videos on her own website suppressed my appetite to see more of her act–EVER). I have to imagine that even if every conference attendee had previewed her act online, there would still be substantial entertainment value simply in having a “Banana Lady” perform live at a trade conference–if nothing else, for the mocking potential. Indeed, Streeter’s email correctly pointed out that online photos and videos are likely to increase demand for her live performance, but the Banana Lady’s lawsuit in response to the email suggests she didn’t value his free marketing tip very highly. (If you visit the Banana Lady’s website, which I’m not recommending you do, you’ll see it does a lot of cross-merchandising, all of which ought to be enhanced by greater online awareness of her unique offering). In the end, if an entertainment act is so easily spoiled by the audience’s online photos or videos, it’s probably not all that entertaining–and certainly not sustainable in a digital age where people are compulsively recording every detail of their lives, both mundane and unusual.

Side note: the court doesn’t address the effect of the conference organizer’s oral announcement to the conference attendees about the photo/video restrictions. I’m assuming the announcement had little or no legal effect. Was there a better way to create a legally binding obligation? This is similar to the irresolute legal treatment of photo/video restrictions on the back of event tickets. There may be good exam questions lurking here for both Contracts and IP courses.

This case also brings to mind the Ninth Circuit’s awful Garcia v. Google ruling. Here, the Banana Lady didn’t use copyright very effectively. She did ultimately take her copyright claim to federal court but it failed there. No matter–if the Ninth Circuit’s ruling stands, we’ll see many federal copyright lawsuits over unauthorized but unplanned recordings of live performances posted to the Internet, even when there is no fixation by or on behalf of the copyright’s author.

Meanwhile, just to reiterate the practice pointer. If you are hiring contractors–whether they are a freelance photographer, a graphic designer, or a person dressed in a banana costume–and they ask for an overreaching IP restriction during your initial negotiations, IMMEDIATELY RUN THE OTHER WAY! Odds are high that their unreasonable expectations, coupled with threatened or actual litigation, will continue after you’ve paid them.