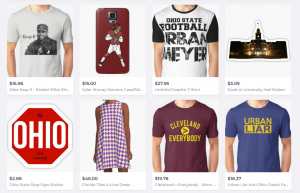 Some Redbubble listings for “urban meyer”

Redbubble is an online marketplace for artists. It outsources many of its functions. Its artist-vendors “are automatically connected with a third-party manufacturer to make the goods.” Redbubble also uses third-party services to package/ship goods and process payments. It appears much of this outsourcing is invisible to buyers; allegedly “When an item from redbubble.com is shipped, ‘the Redbubble name and logo does appear on the packaging that products are shipped in; the name on the return address label is ‘An Artist at Redbubble,’ and the return address itself is Redbubble’s.’ Some items are also ‘shipped with a ‘hang tag’ containing the Redbubble logo that is designed to be removed before the garment is worn.'” It appears everyone agrees that artists are selling items that infringe OSU’s trademarks. OSU sued for trademark counterfeiting, violation of Urban Meyer’s publicity rights, and more.

Redbubble defended on a lack of trademark use in commerce. When I saw this, I nearly plotzed. In the mid-2000s, many trees and electrons died in fierce academic and practitioner battles over what constitutes trademark “use” online. Much of that battle faded away after the Second Circuit’s tortured Rescuecom v. Google opinion, which didn’t clarify much but did make it clear that selling keyword ads was a trademark use. Surely we’re not going to reinvigorate the trademark use battles, are we?

Why, yes we are. The court starts out non-controversially, saying it’s “well-established that selling an item constitutes ‘use.'” In contraposition, “a transactional intermediary is not treated as a seller,” with the example of a showroom that acted as a broker, not a direct seller. OSU only alleged direct trademark infringement, not contributory infringement, and the court says that makes Tiffany v. eBay less relevant.

Instead, the court says the right analogy is Amazon’s marketplace, which “has generally not been found liable for direct trademark or copyright infringement because it merely facilitates sales between other parties” [cites to Milo & Gabby v. Amazon; Hendrickson v. Amazon; Tre Milano v. Amazon]. The court acknowledges the print-on-demand cases, such as Born to Rock v. CafePress and Harley-Davidson v. Sunfrog, that have found trademark use by the print-on-demand services. Nevertheless, the court distinguishes them:

Redbubble contends that it does not use Ohio State’s trademarks in commerce because it is not the “seller” of the goods. Rather, the independent artists design the items that are listed on the website. Once a customer places an order, the third-party manufacturer produces the product, and a third-party ships the finished item to the buyer. In this way, Redbubble operates like Amazon, hosting a website where sellers can list goods for sale, and arranging for the shipment of goods for the seller. Ohio State, however, argues that Redbubble cannot merely subcontract its way out of compliance with the Lanham Act. Redbubble makes all of the arrangements for the artist to produce, ship, and sell the potentially infringing products. Additionally, “[t]he products are delivered in Redbubble packaging, with a Redbubble invoice, with Redbubble stickers and care instructions, and a Redbubble tag attached to the product.”

Redbubble is not liable for direct infringement on these facts. The caselaw sets up a spectrum against which to measure Redbubble’s conduct. At one end are companies that function like auction houses and are not liable for direct infringement. At the other end are companies like CafePress and SunFrog that themselves manufacture and ship infringing products to the customer. Redbubble does not fit neatly into either of these categories. But Redbubble’s actions put it closer to the auction house side of the spectrum than to CafePress. Redbubble essentially offers to “independent artists” an online platform through which to sell their goods and access to Redbubble’s relationships with manufacturers and shippers. Redbubble is not directly producing the goods nor, like SunFrog, is Redbubble maintaining a design database and then placing the designs onto goods that customers order.

Whoa. Apparently, Redbubble sidesteps adverse legal consequences by outsourcing the manufacturing to a subcontractor, even though that subcontracting may be functionally invisible to both the artist-vendors and the buyers. The court then reinforces that so long as Redbubble doesn’t take title to the goods, it doesn’t become the retailer. The court distinguishes a similar case, OSU v. Skreened, by saying the defendant didn’t defend on trademark use grounds in that case, and maybe Skreened had manufactured the goods at issue. The publicity rights claim also fails for lack of “use.”

OSU tries to backdoor the issue by arguing that Redbubble still publishes ads for the infringing goods. The court says that the artist-vendors, not Redbubble, display the trademarks on the service.

This decision ties together a number of ongoing threads on the blog, including:

Though this result is a major win for Redbubble and possibly other online marketplaces, the procedural posture leaves open several key liability questions. First, and most obviously, if Redbubble isn’t the seller, does that leave its contract manufacturers as the culpable party for direct trademark liability and possibly counterfeiting? If so, those folks are going to exit the industry ASAP because they face all the legal risk without all of the economic upside. Second, does this ruling leave the artist-vendors on the hook legally? The IP owner has a harder time chasing all of them down in court, but a litigation campaign could successfully drive those artist-vendors out of the marketplace. Finally, if either the contract manufacturers or the artist-vendors are legally responsible for trademark infringement, will Redbubble face contributory trademark liability? The court emphasizes that OSU didn’t allege contributory liability, but that’s easy enough to correct in future litigation. So a ruling negating direct infringement only tells part of the legal story necessary to clear the activity. This ruling won’t be the last stop in that story.

Though Amazon wasn’t a defendant in this case, the ruling is fantastic news for its online marketplace. The court treats it as well-accepted law that Amazon isn’t the legally responsible “seller” of the goods by marketplace vendors. More on that below.

BONUS: Garber v. Amazon.com, Inc., 2019 WL 1437877 (N.D. Ill. March 31, 2019). This case involves property damage caused by a hoverboard sold in the Amazon Marketplace. The buyer sued Amazon as a “co-seller” of the hoverboard, claiming both strict liability and negligence.

This prompts the court to examine whether Amazon is a “seller” under Illinois law. The first stop is the chain of title, which Amazon was not part of. The court distinguishes various Illinois caselaw where sellers weren’t in the chain of title but had strict liability anyway, but that still doesn’t apply to Amazon. “Though Amazon did earn a commission from the hoverboard sale, its ‘major role’ was providing a venue and marketplace for third-party sellers like Shenzhen to connect with buyers like the Garbers.”

The court says a defendant can be strictly liable even if it is outside the distribution chain when “it (1) participated in the manufacture, marketing and distribution of an unsafe product, (2) derived economic benefit from placing the unsafe product in the stream of commerce, and (3) was in a position to eliminate the unsafe character of the product and prevent the loss.” On the first element, Amazon didn’t manufacture the hoverboard; all of the marketing statements were made by the marketplace vendor; and Amazon never touched the item, so it didn’t distribute. On the second element, Amazon did get a cut of the deal. On the third element, Amazon isn’t in the position to eliminate the product’s unsafe characteristics. “More than one million third-party sellers offer products on Amazon’s marketplace, and Amazon cannot be expected to judge the quality of every product for sale by third parties.”

For emphasis, the court adds:

The negligence claim doesn’t fare any better. Amazon doesn’t have the duties of a manufacturer, nor does it have general duties to warn customers.

← Blogger’s Screenshot of a Newspaper Page Qualifies as Fair Use–Clark v. TransAlt
How Have Section 512(f) Cases Fared Since 2017? (Spoiler: Not Well) →
Subscribe to Blog via Email
Categories