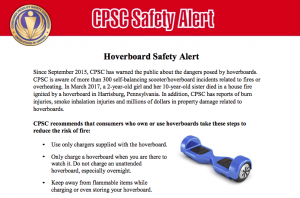 This is a product liability lawsuit against Amazon due to a hoverboard purchased via Amazon that caught on fire.

Plaintiffs bought the hoverboard from the Amazon site in November 2015 as a Christmas gift for their son. The son used the hoverboard and left it in the house and it caught on fire, destroying the house. (Here is an article about the fire and lawsuit: “Nashville family sues Amazon after hoverboard fire destroys house“.) Plaintiffs alleged that they believed they purchased the product from Amazon. While the hoverboard was listed as for sale by “W2M Trading corporation” or “W-Deals,” plaintiffs do not recall ever dealing with any third party. They paid money to Amazon, and the item was shipped (from China) in an Amazon box, with no indicia of third party involvement. Plaintiffs’ order confirmation email, which came from Amazon.com, did vaguely reference that the product was “sold by: -DEAL.” While the precise nature of third party involvement is not clear, a key fact is that Amazon never took title to the item in question (despite it being shipped by Amazon).

Hoverboard sales were a small blockbuster for Amazon. According to the court, Amazon sold $200 million worth between September and November of 2015. However, in December 2015, Amazon’s safety team became aware of the spontaneous combustion issue, and ultimately decided to suspend sales of hoverboards. Around this time, Amazon also sent a “non-alarmist” email to all customers advising that “there [had] been news reports of safety issues involving products like the one [the customer] purchased that contain rechargeable lithium-ion batteries.” Plaintiffs do not recall receiving or reviewing this email although it was sent to their email address on file with Amazon.

Because the statute does not provide any further definitions, the court looks to dictionaries. A distributor is generally defined as someone who sells goods at wholesale or to someone other than the ultimate consumer. Dictionaries define “retailer” as “a merchant middleman who sells goods mainly to ultimate consumers,” and “a merchant who buys articles in gross or merchandise in large quantities and sells the same by single articles or in small quantities.”

Plaintiffs did not produce evidence that Amazon was a wholesaler as to this product. Thus, the dispute focused on whether Amazon fit the definition of a retailer. The court says it does not, citing to the fact that Amazon did not hold title to the product, did not set the price for the product, and did not create the marketing copy.

Amazon’s role in the transaction was to provide a mechanism to facilitate the interchange between the entity seeking to sell the product and the individual who sought to buy it.

Plaintiffs pointed to the fact that Amazon retained all of the funds remitted by plaintiffs, but the court is not persuaded by this. (Interestingly, Amazon decided to retain the funds as it was entitled under the marketplace agreement due to the prospect of a large number of anticipated refund requests for hoverboards.) Plaintiffs also pointed to their perception of Amazon being the seller, but the court says this too is not determinative. Finally, the court also rejects the argument that Amazon is a seller under the statute because it is the “bailor” of the product.

Plaintiffs also brought several varieties of negligence claims, but the court dismisses those claims well. Plaintiffs asserted that Amazon had a duty to warn consumers, and its “non-alarmist” email downplaying the safety concerns breached this duty. The court says that Tennessee courts have not recognized a post-sale failure-to-warn claim. Nor is there a special relationship between the parties that would give rise to a common law duty to warn. Finally, plaintiffs argued that, having sent an email, Amazon assumed this duty and its downplaying of the safety concerns was a breach. The court says that Tennessee courts have not adopted the Restatement provision imposing duty on someone who voluntarily assumes it. The court also says Amazon is not liable under the theory of misrepresentation by concealment. This theory also requires a duty to disclose that the court says is lacking. Even assuming there is a legal duty to disclose, nothing in the email rises to the level of “trickery” that other Tennessee cases have required.

The court also dismisses the claims under Tennessee’s consumer protection act. Emotional damages are not recoverable under this statute. To the extent there was financial harm, there’s insufficient evidence of causation between the deceptive trade practice on Amazon’s part (not adequately disclosing the true seller) and the damages.

As the court notes, its decision is not an outlier. A couple of decisions from federal courts in other states have come to the same conclusion. (Oberdorf v. Amazon, 295 F. Supp. 3d 496 (M.D. Penn. 2017) and McDonald v. LG Electronics USA, 219 F. Supp. 3d 533, 542 (D. Md. 2016).) The court does not cite to the Milo and Gabby case, but the Federal Circuit concluded there that Amazon was not a seller for purposes of patent (and trademark) causes of action. Amazon has chalked up an impressive string of victories on this key issue to its e-commerce efforts. This achievement is even more impressive when you consider that Amazon is the pre-eminent online retailer.

The court engages in some pretty serious contortions in finding the evidence undisputed that Amazon is not a retailer. Plaintiffs have appealed this decision. It will be interesting to see how the appeal shakes out.

Is Amazon Liable For IP Violations By Its Marketplace Vendors? (Forbes Cross-Post)