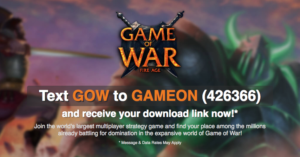 This is a lawsuit against Machine Zone relating to the “Game of War” in-app game of chance mechanics.

Players download GoW—an online strategy game—for free. However, they can purchase virtual gold at prices ranging from 4.99 to 99.999. They can use the virtual gold within the game. They can also use their virtual gold to purchase chips which they can then use at a virtual casino (to spin a wheel and win prizes). The prizes varied in value and sometimes resulted in awards of “basic items” and other times more valuable items. Plaintiff, on behalf of herself and a putative class, argued this amounted to gambling. Plaintiff also pointed to the secondary market in which players could sell their accounts.

Plaintiff argued that this violated Maryland’s gambling statute as well as the California penal code and also stated a claim under California’s UCL. The district court dismissed the claims. Plaintiff appealed the dismissal only as to the claim under Maryland statutory law. The Fourth Circuit affirms. (A link to the trial court ruling is here: “Virtual Casino Doesn’t Violate California’s Gambling Law–Mason v. Machine Zone“.)

The statute allows a plaintiff who “loses money at a prohibited gaming device” to recover. A “gaming device” is a device “at which money or any other thing or consideration of value is bet, wagered, or gambled.”

The court assumed the virtual casino was a prohibited “gaming device” and found that plaintiff did not “lose money”:

Instead of losing money in the virtual casino, Mason paid money to obtain virtual gold, which she later used to accrue virtual chips, all while playing Game of War on her mobile device. Later, when Mason participated in the virtual casino, she used only virtual chips, which are not redeemable for money. Thus, when Mason “spun” the virtual wheel, there was no money at stake. Rather, as a result of that action, she only could receive either virtual gold, which she concedes does not amount to money, or she could receive other virtual resources that likewise were not money or redeemable for money. Accordingly, based on the manner in which the Game of War casino operates, Mason could not have lost or won money as a result of her participation in that virtual activity.

The court looks to the definition of money and finds it unambiguous (citing to Blacks Law Dictionary, which defines money as “[t]he medium of exchange authorized by a government as part of its currency,” and “[a]ssets that can be easily converted to cash”). While the definition of “gaming device” references money and other forms of consideration, the recovery portion of the statute only says a plaintiff could recover “money” that is lost. Thus the court embraces a narrow construction of the term. The court also rejects plaintiff’s argument that the secondary market changes the calculus. While it takes plaintiff’s allegation regarding the secondary market at face value, it notes that virtual chips are not typically sold on the secondary market. It further notes that plaintiff did not allege she tried to sell her own account or any objects in that market.

This is one of several online gambling lawsuits percolating through the courts. Others include those against Big Fish (dismissed, appeal pending), Valve (dismissed in federal court, re-filed in state court).* The virtual casinos have all the indicia of gambling with the big caveat that the participants do not wager money and most online terms allow participants to purchase credits but not cash them out. In some form or other, courts usually rely on this to say that there’s no money lost at the point of gambling (although perhaps it’s lost at the time people “buy in” to the system).

As Eric noted in his comments to the trial court ruling, Machine Zone got the benefit of virtual world exceptionalism, as the court “dismiss[es] the virtual currency losses as ‘just a game.'” It would still be gambling if Machine Zone awarded a car as opposed to cash, and should still be the case if Machine Zone awarded a virtual car or virtual currency. Certainly players are enticed enough by the prospect of winning something to want to spend their credits on the chance to do so. The appeals court relies on the closed loop aspect of the system, pointing out that the virtual chips are not redeemable for money, but this relies on a narrow definition of the statute. Presumably the player would have used the gold for something else and by wagering chips derived from gold the player is losing the gold. Certainly there can be no dispute that Machine Zone benefits monetarily from the availability of in-game gambling.

All of these are based on state gambling statutes, which vary in their scope. So while a ruling here is perhaps persuasive in other cases, it is not determinative.

* I am involved in one as well on the plaintiff side.