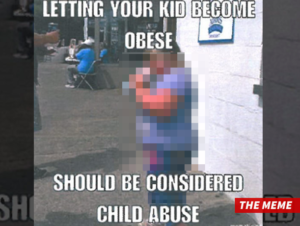 S.E. has Down Syndrome. The complaint alleges that in 2008, S.E. attended a baseball game (at the age of 8) in Nashville and was photographed standing outside the stadium near a concession stand. The photographer posted the photo to his Twitter account with the caption “everything that’s wrong with America.” The photo became a meme. In 2014, it was posted to CBS News’ website. A few years later (in 2016), Valentin Chmerkovisky (the “Dancing with the Stars” pro) posted the meme to his Facebook page with the following caption:

Letting your kid become obese should be considered child abuse.

The photo has been viewed by many of Chmerkovskiy’s “quarter million” followers on Facebook. Chmerkovskiy later posted the following statement:

I’m truly sorry for the lack of sensitivity . . . but one some level I have to agree . . . You’re handicapping your kid, and they’re defenseless. They don’t know better, that’s why you’re there . . . anyway I’m just a childless preacher, but here’s some food for thought. #nopunintended.

While unclear, it appears he posted this statement after S.E.’s mom complained to him and asked him to take down the photo. (See TMZ’s story on the case: “‘DWTS’ Val Chmerkovskiy — Sued by Girl with Down Syndrome“.)

S.E. brought misappropriation and emotional distress/outrage claims against the photographer, CBS, and Chmerkovskiy. S.E. settled with the first two defendants, leaving Chmerkovskiy as the only remaining defendant. He moved to dismiss. In response to his motion, S.E. dropped several claims, leaving only the claim for false light invasion of privacy.

Tennessee law treats false light invasion of privacy as distinct from defamation. The claim requires that the defendant have publicized the plaintiff in a way that places plaintiff in a false light and which is highly offensive to a reasonable person. The court notes that the statement need not be “literally false.” All that is necessary is an implication of underlying facts that are false or that “the overall context of the statement leads to inferences that cast the plaintiff in a false light.” A defendant must have some scienter regarding the falsity. The court says the actual malice standard applies because Chmerkovskiy’s posts address a matter of public concern. However, the court says that the complaint plausibly satisfies the actual malice standard. The allegations suggest that it may have been apparent from the photograph that S.E. had a disability and the obesity was a result of a medical condition and not parental neglect. The court also notes that Chmerkovskiy did not take down the photo even after receiving notice. The court says Chmerkovskiy had reason to doubt that obesity was caused by a lack of parental mistreatement, so he was reckless in making the post given this doubt.
__

Meme law alert! Despite the ubiquity of memes, the legality of using a random stranger’s photo in a humorous way has not been tested very often. Memes are intended to be humorous, but often the depicted individuals may not feel great about being the subject of memes and end up unwittingly in this position (see, e.g., this Business Insider article). Any humor from the meme comes at the subject’s expense.

Disputes involving derogatory photos have involved family members or in one instance a blog post about a public figure. This is one of the first where the subject sues a stranger for posting a photo that portrays the subject in a derogatory light. (The photo does not identify S.E. by name).

The First Amendment principles here are interesting. Chmerkovskiy gets a favorable ruling by being held to the actual malice standard. This is not an obvious legal conclusion. Chmerkovskiy’s basis for claiming a public concern was that the post related to childhood obesity, and that bore a tenuous connection to the image in question. While this lawsuit will very likely settle before it gets too far, I could see S.E. having difficulties satisfying this standard.

Interestingly, the copyright in the photo is not held by the plaintiff, so the plaintiff must rely on personality and publicity torts to control the photo. Contrast the claims here with those in Katz v. Cheveldina, where the subject of a critical blog post obtained copyright ownership of the image and then asserted copyright claims (ultimately unsuccessful). (Note also this situation might have been implicated by Garcia v. Google if the Ninth Circuit hadn’t fixed that ruling en banc).

This lawsuit reaffirms my thinking on safe posting protocol. Stay away from photos! While copyright is the primary issue to worry about, even personality or publicity rights could end up posing a problem. This is the case even if you do not identify the subject by name.

* Or, a variation: you never really know a person until you’ve walked a mile in their shoes. Presumptions about the reasons for SE’s weight were tragically wrong in light of the actual facts. Compare my wife’s post, “You Don’t Look Like You Have Cancer.” The world would be a better place if we do less judging and more sympathizing.

* We rarely see false light claims make any progress in court, especially as a standalone claim (i.e., not in tandem with others). See, e.g., Patterson v. Grant-Herms and Meyerkord v. Zipatoni. It is noteworthy that a plaintiff got this far using a false light claim.

* The court doesn’t discuss S.E.’S identifiability from the photo. Perhaps it would be immaterial to the outcome, but I would have liked to see this issue explored.

* This case reminds me of a decade-old incident involving Virgin Mobile, which downloaded an image and used it for advertising. The photo was licensed under a Creative Commons license, but Virgin Mobile didn’t get the publicity rights from the person depicted in the ad, and Creative Commons licenses only apply to copyright, not publicity rights. So even if photos are memed, they are still not fair game to use for any purpose. A secondary user needs to clear both the copyright and the publicity/privacy rights.