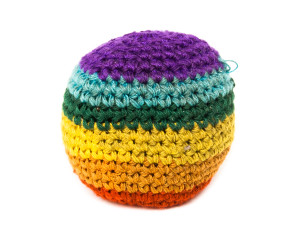 Johannes (Ted) Martin was (and is currently) the world record holder for “most consecutive kicks (no knees)” of a hackysack. A five hour energy drink made an advertisement depicting an unknown actor claiming he performed several superhuman tasks, including breaking “the record for Hacky Sack”….while mastering origami.

The actor attributes his accomplishments to the energy drink. Watch the ad:

Publicity Rights Claim: The court says this claim is barred by the statute of limitations (one year). Even if not, the commercial does not use Martin’s identity. It does not reference Martin in any way, and the phrase “the record for Hacky Sack” is ambiguous. The drink company highlighted the existence of numerous hacky sack records, and Martin basically admitted that the reference to “record for Hacky Sack” didn’t necessarily refer only to him. Even assuming a reference to his accomplishment is a reference to him, the court says the ad does not reference a particular record. Furthermore, the court says that the commercial is a joke. It contains a disclaimer, but even if it did not, the claims are so fantastical that even the most unsophisticated consumer would not take them as true.

Lanham Act Claim: The Lanham Act claim suffers from numerous deficiencies, but even to the extent Martin has the necessary standing and is among the class who can sue under the Lanham Act, he can’t sue because there is no risk of confusion to consumers:

[t]he Commercial plainly falls into the category of farcical exaggerations that carry no risk of deceiving consumers.

Martin alleges that the commercial caused him “considerable angst” (and this entitles him to treble damages), but he also did not allege any lost endorsements or commercial harm due to such confusion. The court is skeptical that Martin’s record has any commercial value, except among the “Hacky Sack cognoscenti,” but these individuals would not be misled since they are in the know. Martin alleged that it’s possible a young Hacky Sack player may be misled by the commercial and be induced to consume the energy drink (and ultimately be disappointed), but Martin does not have standing to allege claims on behalf of these hapless consumers.

This is a great judicial opinion for a variety of reasons. It’s short and worth reading. Holy benchslap alert!

First, it introduces the phrase “defectum humoris non curat lex” (“the law does not reward humorlessness”) into the legal lexicon. According to a quick Lexis search, this is the first time it has been used in a judicial opinion. Something tells me it will be in wide circulation in short order. I would relish the opportunity to work it into a legal filing.

More seriously, the ruling is worth noting, among other reasons, because it resolves claims on a motion to dismiss, which seems to happen with increasing frequency.

This is a fun publicity rights case, and I expect to incorporate the ruling somehow into the next edition of our Advertising Law casebook. It has several noteworthy aspects:

* does the ad reference Ted Martin? The ad doesn’t use his name, voice, likeness, signature or photograph. For those reasons, you’d think this publicity rights claim should be an obbvious loser. Yet, we have seen plenty of other publicity rights cases where the court stretches to find the plaintiff identifiable without the use of any of those attributes, such as the Vanna White v. Samsung case (robot wearing a blond wig next to the Wheel of Fortune board) and the Motschenbacher case (distinctive racecar even though it had a different racecar number). So this case isn’t easily dismissed on the most obvious ground, which is that it never used any aspect of Ted Martin’s personality. Instead, the court takes a lesser-trodden path, implicitly accepted that the ad could evoke Martin’s identity as the recordholder but concluding the evocation wasn’t specific enough because there are multiple hacky sack recordholders and the ad could have meant any of them. While this result makes sense, the circuitous legal logic to reach this conclusion is another indicator of the sad state of publicity rights jurisprudence.

The Commercial is a joke, a comedic farce. The claims it makes are not intended to be taken as true—and to the extent that there could be any doubt on that score, the commercial includes a clear disclaimer advising the most gullible among us that these are “not actual results.”

But unlike false advertising, publicity rights don’t depend on how consumers interpret “claims.” So the fact that no one would believe the ad’s assertions shouldn’t trump any impermissible evocation. This result only makes sense if we remember that publicity rights are an equity-driven doctrine; and because this is a silly lawsuit over a mildly funny joke, Martin gets no credit in the equities analysis. Thus, court says:

Martin’s premise that the Commercial exploits his identity because someone might believe that the actor (or whoever he portrays) actually broke Martin’s record depends on an interpretation so blind to its comedic nature that it is unreasonable and therefore beyond the law’s protection.

This is about as close to a court telling a plaintiff to “lighten up, braugh, and F-U to your legal arguments” as you’ll see in a judicial opinion.

Also, it looks like Illinois’ publicity rights statute has a discretionary fee-shifting provision (765 ILCS 1075/55), so I expect the plaintiff will be “laughing” all the way to the bank…to pick up a cashier’s check for the defendant.

* Puffery. Once we get past the publicity rights claim and the Lanham Act standing issue, it’s easy to call the ad’s statements puffery. The court says:

The Commercial is an obvious farce that would not lead anyone to believe that Martin, or anyone else, had actually accomplished all of the remarkable feats described. Even unsophisticated consumers would get the joke.

Note to students writing one of my exams: yes, this indeed is a nice example of puffery, but you still need to go through the publicity rights analysis and Lanham Act standing claim before reaching that conclusion! In other words, just because we have an obvious puffery doesn’t mean we get to skip the analysis of the other potentially applicable legal doctrines.

* Damages. If your central damages claim is that an ad attempting to be funny caused you “considerable angst,” imagine the angst you’ll feel when you get your lawyer’s bill for the unsuccessful lawsuit.

* More on nomenclature. This case also the term “footbag” as the generic descriptor for “hacky sacks.” Surprisingly, I found 6 other cases in Westlaw using the term “footbag,” plus a “PROPOSED REVOCATION OF RULING LETTER RELATING TO TARIFF CLASSIFICATION OF “KICK SAC” FOOTBAGS” (1997 WL 747606 (Customs)). Given the low prevalence of footbags and the ubiquitous references to “hacky sack,” I’m curious where the term “hacky sack” fits on the genericness spectrum.

Also, the court’s opinion starts with this line from Oscar Wilde: “It is a curious fact that people are never so trivial as when they take themselves seriously.” I didn’t find any other instances of the quote in other Westlaw cases, but it’s a great one!