Can you imagine someone buying Google ($GOOG) AdWords keyword advertising triggered by your name?  Most of us wouldn’t dream of it, usually because our names just aren’t valuable enough for anyone to bother.  In contrast, some professional service providers, such as lawyers and doctors, tout their names in expensive advertising campaigns to consumers—and have competitors who would love to piggyback on that advertising to reach the same consumers.  In a novel and persuasive ruling, a Wisconsin appellate court recent rejected a professional service provider’s attempt to use publicity rights to shut down a competitive keyword advertiser.

The case involves two high-profile personal injury law firms in Wisconsin.   The defendant, Cannon & Dunphy, bought keyword advertising on the words “Habush” and “Rottier,” presumably referring to the partners at its rival law firm Habush, Habush & Rottier.  As a result, searchers looking for the law firm Habush Habush & Rottier or its eponymous partners might see ads for Cannon & Dunphy.

Normally, a lawsuit like this would be brought under trademark law.  Lawyers can develop trademark rights in their name, and the firm name Habush Habush & Rottier should be a trademark.  However, it’s less clear if the individual partner names have achieved trademark protection, or if any trademark protection would extend to the use of just their last names.

Habush and Rottier sued Cannon & Dunphy (and some of its individual partners) in late 2009.  In June 2011, the trial court rejected the claim in a messy opinion where the judge appeared overwhelmed by the case’s legal and technological complexity.  Because two very successful and determined litigation firms were squaring off, the judge also knew that the losing side would appeal no matter what. 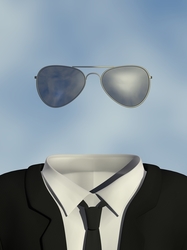 Interpreting the Wisconsin publicity rights statute, the court said the keyword advertiser didn’t make an actionable “use” of the names Habush or Rottier by using the names as “invisible” ad triggers.  The court analogized the defendants’ keyword advertising to buying a physical-space billboard physically adjacent to the plaintiff’s offices, saying that such proximity would not constitute a “use” of the plaintiff’s personality.  While normally I am troubled by physical-space analogies to online activity, I thoroughly explored—and defended—this analogy in my Brand Spillovers paper, sadly (for me) not cited by the court.  Thus, because the plaintiffs failed to establish the statutory violation, Cannon & Dunphy wins.

In contrast, if the ad copy had displayed the name, this court probably would treat that as a publicity rights “use” and the defendant would have to find other grounds to defeat the lawsuit.  The court also indicates that invisible uses in contexts other than keyword advertising could constitute a publicity rights “use.”

The plaintiffs correctly argued that the court’s conclusion on publicity rights “use” diverges from trademark law’s treatment of the issue.  Most courts have held that buying keyword ads on a trademark constitute trademark “use” even if the trademark doesn’t appear in the ad copy, with the Second Circuit’s 2009 Rescuecom decision basically cementing that legal conclusion.  (In my Deregulating Relevancy and Online Word of Mouth papers, I argued why disposing of keyword advertising cases on trademark use grounds would be a better result, but those arguments haven’t carried the day).  The Wisconsin appeals court says simply that the Wisconsin publicity rights statute means something different by the word “use” than trademark law does, so Rescuecom and related trademark precedents aren’t binding.

[Note: unlike Google’s detailed trademark policy, Google’s policy towards personal names is murky.  It says in total: “We do not monitor the use of proper names in AdWords ads or keywords. Users interested in removing an advertiser’s use of proper names in ads should contact our Consumer Complaints team via our complaint form.”]

This is an interesting case in part due to its novelty.  We’ve seen other plaintiffs unsuccessfully attempt to use the Wisconsin publicity rights statute to control Internet advertising (most obviously, the repeat litigant Bev Stayart), but this case provides the cleanest opinion to squarely address a publicity rights challenge to keyword advertising.

Three implications of this ruling:

Keyword Advertising Lawsuits Aren’t Economically Rational.  These lawyers are spending a lot of time and money fighting each other in court.  I hate to repeat myself, but keyword advertising lawsuits aren’t economically justified, even if the plaintiff wins.  See this recap post.  Then again, given how well these firms—and lawyers—know each other and how fiercely they compete, I doubt the plaintiffs brought this lawsuit solely to maximize their profits.

Keyword Advertising and Competition.  The trial court opinion in this case expressly acknowledged the competitive concerns associated with keyword advertising.  It’s easy to see why.  Imagine an injured victim needs a personal injury lawyer and has seen Habush Habush & Rottier’s advertising.  During the consumer’s keyword search to find the firm, Cannon & Dunphy presents itself to the victim as a competitive alternative.  This encourages the victim to investigate multiple law firms, and those firms will work harder to meet the victim’s legal needs.  This is a win for the consumer, and a win for competition.  The appellate court expressly sidestepped these public policy issues, but its ruling nicely advances those interests.

Why a Plaintiff Win Could Be Disastrous.  I read a lot of crackpot lawsuits, often pro se, basically complaining that someone published the plaintiff’s name online (one recent example).  Can you imagine what would happen if those plaintiffs can claim that any keyword advertising triggered on their last names violated their publicity rights?

Take my last name for example, Goldman.  There are plenty of other Goldmans in the world, most obviously the big investment bank Goldman Sachs.  How would we determine if a keyword advertiser on the word “Goldman” was advertising to compete with Goldman Sachs or violating my publicity rights?  We might impose some requirement of direct competition to distinguish the Habush situation from the Eric Goldman situation, but that competitive limitation isn’t in the Wisconsin publicity rights statute, and it won’t always be easy to decide who “competes” with me.

So even if you feel some mild sympathy towards Habush Habush & Rottier because its rival is engaging in ambush marketing, recognize that subsequent publicity rights plaintiffs won’t look so sympathetic.

[Photo credit: Portrait of an invisible Man with sunglasses in business suit // ShutterStock]