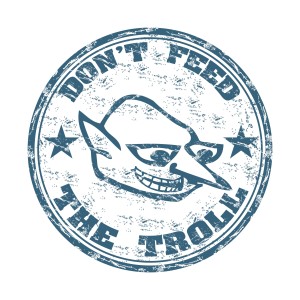 sutterstock / oxlock: Blue grunge rubber stamp with a troll face and the text do not feed the troll written with capital letters

This is a Facebook termination case alleging discrimination by the employer. Plaintiff Chris Redford worked at KTBS as an on-air crime reporter. The station apparently had a social media policy that instructed employees to not respond to viewer complaints on social media:

If you cho[o]se to respond to these complaints there is only one proper response: Provide them with George’s contact information, and tell them that he would be glad to speak with them about their concerns. Once again, this is the only proper response.

Some moron had to go and comment under this story in the KTBS story. The only intelligent thing he had to ask was ‘Does Bob Griffith still play with hamsters??’ I get so damn tired of stupid people. What the heck purpose does that serve?? Casey Ford is his name Sorry, but that crap just gets on my last nerve.

Redford was fired for making this comment. The same day, an African-American woman (Lee) was also fired for violating the policy. She responded several times to negative viewer comments on the official KTBS page. After two warnings, she was fired. Additionally, another on-air personality (Machi) responded negatively to a viewer comment on her personal Facebook page. She was not warned or disciplined.

Discrimination Claim: One aspect of Redford’s prima facie case required him to show that similarly situated employees were not treated as unfavorably as he was. He pointed to Lee’s and Machi’s treatment under the policy. Defendants argued that the differences in wording and tone of the various employee posts meant they were not similarly situated, but the court disagrees. Essentially all three responded to negative viewer comments, which was ostensibly prohibited.

While defendants raised a non-discriminatory reason for the termination (violation of the policy) the court says this could be pretextual. The news director testified that the policy does not necessarily prohibit employees from responding to viewer complaints on their own personal social media pages. Pointing to defendants’ treatment of Machi (who also posted on her own page but was not disciplined), Redford successfully created an issue of fact on pretext. The precise means of defining what is a personal versus a company page is unclear; apparently, the station did not condemn posts to personal pages that were set to “private”. The station argued that Redford promoted the station on his page which rendered it more official than private but the court says the record is unclear on this point.

Defamation: Redford’s defamation claim stemmed from a statement released by the station that mentioned the dismissal of two employees, including Redford. While plaintiff was not referenced by name, sufficient details would allow a reasonable listener to determine who the station referenced. The court says it’s unclear whether Redford violated official policy and whether he “respond[ed] to viewer comments on the official KTBS page.”

The station social media policy is laughably bad (both poorly worded and bad policy). And as Eric further explores below, reflects a dim view of television reporters’ ability to calmly engage with the public. The dispute also raises the typical question of whether a page is a personal page or a company page. Something we saw a few small disputes over but which has never been really litigated.

Eric’s Comment: The TV station’s social media policy is 180 degrees wrong. Perhaps it should be a fireable offense to ignore viewer complaints, but to tell reporters they can’t engage their viewers? Maybe that makes sense in a broadcast world where the broadcaster controls the conversation, but it’s asinine in an interactive one. Engaged consumers are a media outlet’s lifeblood; and stonewalled consumers are likely to become less engaged consumers and therefore less valuable to the outlet.

In 2012, the NY Times dealt with a flap over its social media policy for reporters. I’m not sure if I agree with all of the Times’ policy, but this part of the policy seemed quite logical:

Those two basic principles should be enough to guide us in most situations. Be thoughtful. Take care that nothing you say online will undercut your credibility as a journalist. Newsroom staff members should avoid editorializing or promoting political views. And we should be civil – even to critics – and avoid personal attacks and offensive remarks.

While the terrain may be new, these principles are not. Our Ethical Journalism policy says this about dealing with the public:

We treat our readers no less fairly in private than in public. Anyone who deals with readers is expected to honor that principle, knowing that ultimately the readers are our employers. Civility applies whether an exchange takes place in person, by telephone, by letter or online

Frankly, any social media policy that restricts reporters’ social media behavior more than this is almost certainly wrongheaded and probably reflects a misguided view of how to build and maintain audiences online.

← You Can’t Buy A Copyright Just To Bury It–Katz v. Chevaldina (Forbes Cross-Post)
Another Murky Opinion on Lawyers Buying Keyword Ads on Other Lawyers’ Names–In re Naert →
Subscribe to Blog via Email
Categories