May 19, 2015 · by Eric Goldman · in Content Regulation, Derivative Liability 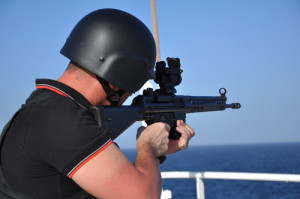 If I didn’t practice Internet law, I might have chosen maritime law. Their disputes are often interesting. This particular case sounds like a movie plotline. AdvanFort provides armed guards to ships worried about piracy (the real kind…you know, on the ocean). The Indian government accused the crew of one of these ships of violating their Arms Act (i.e., arms running), so it threw the crew in jail. To help get the crew released, AdvanFort retained John A.C. Cartner as one of its lawyers. AdvanFort and Cartner then had a falling out over a fee dispute, which led to an arbitration and a pending bar complaint against Cartner. Cartner subsequently published an online article critical of his former client’s principals at The Maritime Executive website. (The article is down there, but here’s a copy of it). AdvanFort’s principals claim that Cartner’s article defamed them.

In this ruling, some of AdvanFort’s defamation claims against Cartner survive a motion to dismiss. Does this mean The Maritime Executive is also liable for publishing Cartner’s allegedly defamatory article? Ahoy, Section 230!

Trying to fit into Roommates.com, The plaintiffs alleged that The Maritime Executive was a partial information content provider. Citing Jones as the latest flagship case of Section 230 (strangely bypassing Zeran, which is binding precedent on this court), the court responds:

Plaintiffs contend that they have pled enough facts to support a plausible inference that TME is responsible for the creation or development of the Article. They point specifically to the allegations that the Article was labeled an “exclusive,” and that TME “publishes articles and information” on its website. The Court finds that these allegations are insufficient, by themselves, to support a reasonable inference that TME was at least partly responsible for the creation or development of the Article. With additional allegations, such as those contained within Plaintiffs’ briefing but not alleged in the Complaint, Plaintiffs will perhaps be able to overcome this pleading hurdle. For instance, if TME paid Cartner to write the Article, or has paid him in the past, an allegation to that effect might support a reasonable inference that TME was in part responsible for creating the Article or materially contributing to its alleged unlawfulness. Because it is not clear from the Complaint as currently pled that TME is outside the scope of CDA immunity, however, the Court will dismiss the defamation claims against TME without prejudice on this basis as well.

The court is on right track until it suggests that if The Maritime Executive pays for the content, then it might be a partial information content provider. No, no, no. The flagship case on that point is Blumenthal v. Drudge from 1998, and similar rulings include Nasser v. WhitePages (also from a Virginia district court) and Stevo Design, Inc. v. SBR Marketing Ltd.. In some cases, payment might be relevant to establishing a principal-agency relationship, and agency might help work around Section 230. However, freelance author relationships should be a far ways away from an agency, so the payment information seems unlikely to make a difference here. Overall, this judge seemed appropriately skeptical of the plaintiffs’ claims, so I’m hopeful the judge will reach the right Section 230 result if the plaintiffs try again.