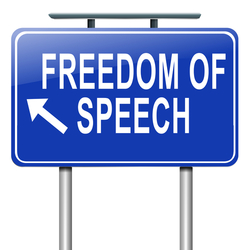 How do you celebrate the Fourth of July? I spent the holiday thinking about how 47 USC 230 enhances my freedoms. However, I’ve been feeling a little guilty because I try to blog every Section 230 case I see, and I fell behind this year. Too many cases, not enough blogging time. So yesterday I worked through my Section 230 blogging backlog. Here’s what has been languishing in my queue:

Oh yay, another Perfect 10 case. This time Perfect 10 sued Giganews for providing a commercial service to access USENET newsgroups. I’ll have more to say about the copyright and trademark angles of this ruling, especially the discussion about direct copyright infringement and volitional conduct (Judge Matz wrote a super opinion; I expect to add it to my Internet Law reader).

This post focuses on the Section 230 part of the opinion. Perfect 10 alleged a California unfair competition (UCL) violation because (1) Giganews didn’t purchase the publicity rights of the models while Perfect 10 did, and (2) trademark infringement and dilution. The court says “All of these allegations are based on the actions of third party USENET users, not Defendants,” so Section 230 applies. The Roommates.com attack failed because Perfect 10 didn’t allege that Giganews created or developed the offending content. [I have more to say about Roommates.com: an RA and I did a little research on case citations to Roommates.com, and the preliminary results are about 3/4 of the cites are for the defense.]

This ruling sucks. The FTC alleged that LeanSpa and related entities ran a website selling a weight loss system, and when consumers made a purchase, they were unexpectedly signed up for an “auto-shipment” program that imposed high monthly recurring charges.

I’m interested in the treatment of LeadClick, which coordinated hiring of affiliate marketers who allegedly created fake news sites, including fake consumer testimonials, promoting LeanSpa. The FTC alleges LeadClick “monitored and acted to further the use of these sites” and “discussed strategies to reduce the impact of the excessive chargebacks” with LeanSpa.

At the motion to dismiss stage, the court rejects LeadClick’s Section 230 immunity. The court questions if LeadClick qualified as the provider of an interactive computer service in this context because the “Amended Complaint merely alleges that LeadClick provided network links that directed consumers from one website to another.” The court also questions if LeadClick was an information content provider of the affiliate marketer websites, citing Accusearch. The court cites the following facts in support of LeadClick’s possible role in development:

the LeadClick defendants coordinated the use of the fake new sites, monitored them, discussed how to use the information in concert with LeanSpa’s products, and developed strategy intended to permit the use of the deceptive content to continue

This is unquestionably a bad ruling for Section 230, though I’m still not sure how bad it is. The FTC basically alleged that LeanSpa and LeadClick were in cahoots with each other to market a bogus service, and this kind of conspiratorial coordination might appropriately be outside of Section 230. On the other hand, the sloppy recitation of salient facts here open up lots of questions about the future applicability of Section 230 in the affiliate marketing/lead generation context. Reduced to the essentials, the FTC is trying to hold an online provider, LeadClick, for third party content (the fake websites), and that’s exactly what Section 230 should cover.

Either way, this is a rare courtroom win for the FTC (or any other regulator) on a theory of holding third parties accountable for the behavior of affiliate marketers, which has failed in litigation more often than it has succeeded. The FTC has used this theory repeatedly in wresting settlements, but they surely like having their argument blessed in court.

Stevo Design publishes sports betting reports. SBR runs a Costa Rica-based message board on sports betting, and it appears users republished Stevo Design reports on the message board. To encourage user contributions, SBR pays “loyalty” points that are redeemable for the equivalent of cash at offshore betting sites.

The case has some interesting discussion regarding copyrights and trademarks, including a conclusion that the copyright claims reach extraterritorially and the trademark claims are barred by the first sale doctrine and nominative use, despite the allegations of initial interest confusion.

It’s not surprising the point payments don’t disturb Section 230. Section 230 immunizes content that the online publisher pays for it; this is a venerable proposition going back at least to Blumenthal v. Drudge. Though it follows a convoluted path, the court eventually reaches that conclusion.

The court then concludes that all of the referenced causes of action attempted to hold SBR as the publisher or speaker of third party content. Among other implications, the case unambiguously holds that user online republication of trade secret information is immunized by Section 230. Of course, the Section 230 analysis would have turned out differently outside the Ninth Circuit where the ccBill precedent doesn’t apply. To me, the ruling shows the judicial efficiency of letting Section 230 clean out state IP laws.

This case is similar to Backpage v. McKenna, 2012 WL 3064543 (W.D. Wash. July 27, 2012), which I previously blogged. Both lawsuits (and a third in New Jersey) involve state statutes designed to shut down Backpage.com’s publication of online prostitution ads. A state law restricting Backpage from running online prostitution ads would facially violate Section 230, so these statutes instead required online publisher to verify the age of any models depicted in the ad copy. No matter; the courts recognized–and rejected–the attempt to work around Section 230. The Tennessee court says:

the sale of online advertisements regulated by section 39-13-314 derives from a website’s status and conduct as an online publisher of classified advertisements. In the realm of paid advertising, charging advertisers a fee in exchange for hosting and providing space for the advertisers’ message “is something publishers do”—online classified advertisement services included. Put another way, the transaction of the sale is inherent in the classified service’s conduct as a publisher; this Court cannot separate the sale from the publishing, and thus the protection of section 230 is triggered.

the state statute would likely undermine both goals supporting CDA immunity because it would encourage websites either to restrict speech or to relax their current self-policing.

The latter standard is a favorable interpretation of Section 230 because it focuses on statutory effect, not just the statute’s literal words. If other courts follow this approach, it will be difficult or impossible for states to come up with other tricky legislative workarounds to Section 230.

A school district suspended two students for running a blog making racist posts. It appears third parties contributed racist content to the blog as well. The court says Section 230 proves irrelevant because the brothers’ own posts contributed to disrupting the school.

This is another thedirty case, and it’s another puzzling Section 230 loss like the Jones v. Dirty World case. In this case, thedirty published several user-submitted posts about Hare which Richie followed with characteristically snarky comments. The court starts off on the right foot:

it is undisputed that the five postings at issue were not authored by Mr. Richie. Rather, he selected them for publication. If Dirty World‘s involvement with the postings were limited to the decision whether to publish user-supplied content, it would clearly be entitled to immunity under § 230(c)(1)

However, the court says it’s an open question if Richie’s snarky embellishments were defamatory. Some clearly weren’t, but the court says some got close enough to the line to survive a motion to dismiss. That seems like a highly generous standard for defamation, as I don’t think any of the comments came anywhere close to the defamation line.

The court says that because the case will survive discovery anyway, the court can defer the other issues related to a Section 230 defense:

Discovery will allow the creation of a factual record that will provide a better foundation for the Court to rule on the issue of whether Dirty World designed its website to be a portal for defamatory material, Johnson,

614 F.3d at 792, or specifically encourages development of what is offensive about the content? submitted by third parties to its website, Accusearch, 570 F.3d at 1199, so as to lose the protection of § 230(c)(1) for user-submitted content by participating in the content‘s development.

Sadly. we’ll never know the answer to that crucial question. The case settled in February. To me, this ruling seemed to be another example where a court got a little timid in light of a pro se plaintiff, going a little too far to protect the pro se plaintiff from the effects of a statute that completely precludes the lawsuit. Notice that an anti-SLAPP law, by raising the bar for plaintiff claims, would have helpfully tipped the balance to the defense despite the judge’s perhaps over-earnest efforts to help a pro se plaintiff.

The plaintiff claims a wrongful retransmission of a pay-per-view event. Following the similar Zuffa case, the magistrate says user-initiated livestreams do not create a Communications Act violation by Justin.tv or YouTube. The magistrate then declines to opine on Section 230’s applicability. The judge adopts the magistrate report without modification.

[Photo credit: Illustration depicting a roadsign with a freedom of speech concept // ShutterStock]