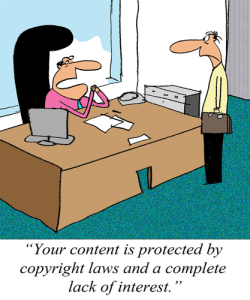 “Your content is protected by copyright laws and a complete lack of interest.” // ShutterStock

You probably recall Righthaven, the now-defunct copyright enforcement entity (some might call it a copyright troll) that purchased newspapers’ copyrights so it could sue small-time bloggers who republished articles; after suing, it would demand financial settlements the bloggers couldn’t afford. Steve Green, a reporter at the Las Vegas Sun newspaper, tirelessly chronicled Righthaven’s waxing and waning. To “celebrate” the five year anniversary of Righthaven’s launch, Green has posted a lengthy retrospective (with his now-employer, the Orange County Register). Some of the best tidbits from the article:

* Everyone associated with Righthaven avoided discipline by the Nevada bar regulators. Say what? I don’t have all of the facts, but based on what I saw, this is incredible. Numerous judges harshly criticized Righthaven’s litigation tactics (see, e.g., this benchslap using words like “flagrantly false,” “disingenuous,” “deceitful,” “brazen” and “egregious”), and I thought there was a chance some lawyers would lose their licenses for their involvement in this scheme. Instead, not even a single public reprimand. Wow. Exactly what does it take to violate Nevada’s ethics rules?
* the purported class action of Righthaven victims fizzled out with Righthaven’s demise.
* Steve Gibson, Righthaven’s principal, is still practicing law in Nevada. Indeed, he self-describes himself as “one of the premier business and intellectual property attorneys practicing in Las Vegas.” This makes me wonder: do his prospective clients not Google him???
* The mom of Colleen Lynn, an anti-Righthaven activist, called Righthaven’s campaign “legal terrorism.”

* standing. The Righthaven jurisprudence clarified and reinforced that the right to sue for copyright infringement isn’t a commodity that can be freely bought and sold. Following the Righthaven rulings, I’ve seen other defendants win on standing grounds against enforcement entities who similarly lacked the proper rights. The funny thing is, as a drafting matter, standing problems are quite easy to avoid. I’m always amazed that Righthaven’s newspaper partners refused to give Righthaven a proper exclusive license to their content. It shows how little those business “partners” really trusted Righthaven.

* fair use. Righthaven made some great fair use law, including the possibility of fair use on a motion to dismiss and fair use for republishing an entire newspaper article. I always teach my students that fair use is an equitable defense, and Righthaven repeatedly messed up the case equities: it was an enforcement entity with no real rights to exploit the underlying work; it didn’t give defendants any notification before suing; it sued sympathetic small-time bloggers; and it demanded financially ruinous payments from them. It’s not surprising judges would twist an equitable doctrine against them.

Second, in the wake of the RIAA’s mass litigation flameout, Righthaven’s campaign reaffirmed that it’s hard to engage in mass copyright enforcement profitably. Of course, Righthaven didn’t provide an ideal test case to evaluate that market because Righthaven was a poorly constructed idea (suing mom-and-pop bloggers without notice) executed poorly (i.e., with dubious legal “expertise”). Still, Righthaven’s outcomes showed that the combination of fair use and fee shifts to the defendant show the hurdles that any mass enforcement agency must overcome to be profitable.

Despite the unexpected benefits we’ve gotten from Righthaven, I’m glad it’s gone. Thanks for the precedents, but good riddance.