This is a lawsuit against Google over in-app purchases made by minor children, reminiscent of a similar lawsuit against Apple. Plaintiff on behalf of a putative class alleged that, among other things, Google allowed someone to make a purchase for thirty minutes (as opposed to Apple’s 15 minute window) after entering their account information and this meant her children racked up purchases. 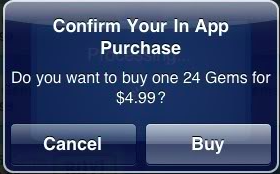 Here, plaintiff didn’t bring claims on behalf of her child, so she doesn’t have standing to disaffirm. Google makes a separate argument that the terms of service control all purchases made through the platform, and the terms say that account-holders are responsible for transactions conducted through their account (i.e., responsible for making sure no one misuses their password). Plaintiff tries to argue that the terms are ambiguous, but the court disagrees.

The court dismisses both of these claims.

Consumer Legal Remedies Act Claim: Plaintiff argued that Google failed to disclose material facts about the apps – namely, that although they were advertised as free (or at nominal cost), they could be used to make further purchases. The court also dismisses this claim, saying that while plaintiff adequately alleged a possibly misleading statement, or withholding of a material fact, she did not allege reliance.

Unfair Competition Claims: Of the various types of unfair competition claims, the court says that only her claim under the “unfair, deceptive or misleading” prong is adequate. The court liked plaintiff’s allegation that:

Google actively advertised, marketed and promoted certain gaming Apps as “free” with the intent to lure minors to purchase Game Currency in a manner likely to deceive the public.

The court declines to dismiss this claim.

Unjust enrichment: The parties argue over whether this is a standalone cause of action or a remedy. The court says, citing to the Apple in-app purchase case among others, that it will allow plaintiff’s to proceed with it at this stage.

Duty of Good Faith: The court allows this claim to go forward as well. Google argued that an implied duty of good faith can’t be used to contradict a specific term of the agreement (that account-holders are responsible for their activity) but the court disagrees. The provision regarding authorized charges merely allows Google to bill the account-holder, but plaintiff’s allegation that Google encouraged children to make in-app purchases is separate from this term.

This looks like a similar result to the Apple in-app purchase case. Apple settled that lawsuit and separately settled with the FTC as well. “Apple to Refund App Store Purchases Made Without Parental Consent.”

Normally, e-commerce companies don’t get bogged down in litigation over their practices, and it’s tough to pinpoint exactly what’s different here, other than perhaps the transactions involve minors. The C.M.D. v. Facebook case provided some clarity to contracting with minors (and allowed prospective disaffirmance), but a distinguishing fact here is the involvement of virtual goods. I’m not exactly sure how disaffirmance, if properly implemented, would play out here. Would you have to agree to deletion of the virtual good? But the cases end up hinging on a vague idea of a misleading practice, even though there’s very little fleshed out about what is misleading in the advertising and what statements are made by Google versus by the app developer. Maybe courts and plaintiffs think the platforms should take affirmative steps to prevent purchases, or give parents the option of additional controls? (See, e.g., “Morally Responsible Apps Are The Need Of The Hour“.) For what it’s worth, in the FTC’s action against Apple, Commissioner Wright issued a dissenting statement that asked whether it made sense for the FTC to crack down on Apple in-app purchases: “Dissenting Statement of Commissioner Joshua D. Wright; In the Matter of Apple, Inc.” [pdf].

[Note: between the ruling and blog post, Plaintiff filed an amended complaint.]