How Well Do You Know IP Trivia? Let’s Find Out 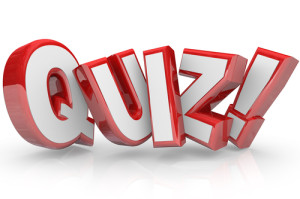 Like all other exams administered by law professors, this one was designed to make you question if you are smarter than a snail. Photo credit: The word Quiz in red 3D letters // ShutterStock

Last week, the High Tech Law Institute hosted WIPIP, a conference where IP professors and fellows present their academic works-in-progress for peer feedback. As part of the festivities, we had an IP trivia night–which I believe is the first IP trivia contest the IP academic community has ever had. Fifty professors, fellows and lawyers organized themselves into 10 teams of 5 members each, designed so each team had experts in each of the major IPs. The teams were divided into two preliminary rounds, with the top two teams from each round advancing to a final round battle royale. In this post, I’m sharing the questions so you can enjoy the experience/live the horror yourself.

The trivia questions were hard by design. Indeed, about a quarter of the questions stumped all of the participating teams. If you want to see how well you would have done in the competition, I’ve included the questions–WITHOUT THE ANSWERS–below, as well as how many teams got the question correct so you can commiserate. You can find the answers in the PPT slide deck we used at the event. Remember, the teams had 5 members with complementary expertise, so your individual batting average naturally should be lower than the teams’.

The advantage of going through the questions without ready access to the answers is that you won’t “accidentally” look ahead and spoil your ability to answer independently. But if you’d like to take the quiz with the answers interspersed, take a look at the deck (with images/photos). Just don’t advance to the answer slide until you’ve given yourself a fair chance to succeed or fail on your own merits!

Most of all, remember to have fun! This is a trivia question, not an intelligence test, and we have lots of neat trivia in our community worth celebrating.

During the week before trivia night, the High Tech Law Institute twitter feed posted a series of questions to our Twitter feed. The questions and answers:

* Q: What comic strip character’s dad was a patent lawyer? A: Calvin from Calvin & Hobbes
* Q: What is copyright dilemma in 2009 movie, The Last Station? A: Should Leo Tolstoy put his works in public domain?
* Q: In what revision of the Berne Convention was Article 6bis on moral rights introduced? A: 1928 Rome
* Q: What brand name used to be called “Bib-Label Lithiated Lemon-Lime Soda”? A: 7-Up
* Q: The quote “Everything that can be invented has been invented” is often misattributed to what patent official? A: Charles H. Duell

OK, now that you’re warmed up, no more softballs. On to the hard questions!

Q1: What company obtained the most issued U.S. patents in 2013? This was supposed to be a super-easy question because the answer hasn’t changed in the past 20 years, but only two of five teams got this correct. Incorrect answers included Microsoft, Google and Intellectual Ventures.

Q3: In what city was the first Taco Cabana located? Four of five teams got this correct.

Q5: What book contains the following line: “I knew that a country without a patent office and good patent laws was just a crab, and couldn’t travel any way but sideways or backwards.” All five teams got this correct.

Q6: In the famous copyright case CCNV v. Reid, what phrase is written on the sculpture’s base? (credit only if exactly correct). Only one of the five teams got this correct. A second team had all of the right words, but in the wrong order.

Q7: Who is the current Commissioner for Trademarks? Only one of the five teams got this correct.

Q8: Name the pharmacist who invented the Coca-Cola formula. Only one of five teams got this correct.

Q9: Actress Jamie Lee Curtis obtained Patent #4,753,647. What was her invention? None of the teams got this correct.

Q10: Who took the famous photo of Oscar Wilde that was the subject of a Supreme Court ruling? (credit only if first and last name are correct) Two of five teams got this correct.

Q11: What year was the International Trademark Association (INTA) formed? (within 2 years) This is a pretty hard question, but one of the five teams got it right. I heard some grumbles because the organization was initially named the “United States Trademark Association” and therefore the formation question could be misinterpreted. I based my date on the date INTA posts on its website, a clarification I made to the participants. Perhaps because of this ambiguity, the earliest and latest answers were separated by 120 years.

Q12: Who wrote the Second Circuit’s majority opinion in the famous publicity rights case Haelen v. Topps, which is believed to have coined the phrase “right of publicity”? Two of the five teams got this correct.

We had three tiebreaker questions we didn’t use:

* name the person depicted in a photo (a famous judge)
* Name the California cities that fought in court over the name “Surf City USA”
* What does “CONFU” stand for? Surprisingly, this stumped the audience. Some thought it was a typo from CONTU.

The highest team score in preliminary round #1 was 65 points.

Q1: In the famous patentable subject matter case of Diamond v. Chakrabarty, who was the initial assignee of Chakrabarty’s patent? Two of five teams got this correct. Incorrect guesses were Chevron, Exxon and University of Illinois (the latter being a solid guess as Dr. Chakrabarty is a professor there).

Q2: The famous fair use case Folsom v. Marsh involved the private letters of what person? Four of five teams got this correct.

Q3: What year was the Lanham Act enacted? Four of five teams got this correct.

Q4: How long is the statutory post-mortem publicity right in Indiana? Only one of the five teams got this correct. Answers ranged from “zero” to “forever.”

Q5: How many patents are known to have been issued by the Confederate States of America (within 2.5%)? None of the teams got this correct. Guesses ranged from 50 to 5,000.

Q6: What is the name of the Texaco scientist whose photocopying of Journal of Catalysis articles was examined in the fair use case, American Geophysical Union v. Texaco Inc.? (credit only if first and last name are correct) None of the teams got this correct, although one team did get the last name correct.

Q8: How many states (excluding territories) have adopted the Uniform Trade Secret Act? Only one of the five teams got this correct, although three teams were off by just one. There is a partial ambiguity in this question because the states that have adopted the act haven’t done so uniformly, but my source was The National Conference of Commissioners on Uniform State Laws.

Q10: In the famous copyright fair use case of Harper & Row v. The Nation, what is the first and last name of the Nation’s editor who wrote the infringing story? Two of five teams got this correct.

Q11: Before it was renamed Amazon.com, what was the name of Jeff Bezos’ online retailing company at incorporation? None of the teams got this correct. Three teams thought this was a trick question and answered “Amazon.”

This round also had three tiebreakers we didn’t use:

* Name as many of the current International Trade Commissioners as you can (no deductions for incorrect names). Most of the audience knew Scott Kieff, a former law professor, but I don’t think I heard any other correct answers.
* What was the length of a patent’s term in the 1790 Patent Act? An easy question.
* In the Roadrunner/Wile E. Coyote cartoon series, what is the brand name of the Coyote’s typical supplier of goods? An even easier question.

The highest team score in preliminary round #2 was 45 points.

Q1: Part A: which U.S. Supreme Court case first used the phrase “flash of creative genius”? Part B: who wrote the opinion? Three of four teams got both Part A and Part B.

Q2: We showed the advertisement from the famous case Bleistein v. Donaldson Lithographing Company, 188 U.S. 239 (1903), with a portion blocked out, and asked the participants to fill in the blank. Two of the four teams got it correct.

Q3: What is the last sentence of Judge Kozinski’s opinion (excluding the appendix) in Mattel v. MCA Records, a/k/a the Barbie Girl opinion? (credit only if exactly correct). Three of four teams got this correct. One team answered “Affirmed” and protested the question. We rejected the protest but I see their point.

Q7: Who is the current Chief Administrative Trademark Judge of the TTAB? None of the teams got this correct.

Q8: This 1997 movie involved an elaborate confidence scheme to steal a trade secret formula called “The Process.” Two of four teams got this correct.

Q9: We showed a photo of three gentlemen on the courthouse steps and asked the audience to name them. None of the teams got it correct.

Q10: In what year was “Nimmer on Copyright” first published? Two of the four teams got this correct. Answers ranged from 1958 to 1973.

Q12: Part A: at what law firm did Justice Sotomayor practice IP law? Part B: name her major IP client at the firm. None of the teams got Part A; one team got Part B.

Participants misunderstood this question’s references to +1 and -1. Some teams thought that meant +1 or -1 points, not +1 or -1 in terms of number of correct judges. I see how that could have been worded better.

All of the teams got Part A correct. Only one team got a net of 3 other judges correctly. Popular answers were Judge Rich (all four teams) and Judges Nies, Friedman, Smith and Newman (2 teams each). Judge Newman is not correct: she joined the bench in 1984.

Q15: What was the first country held in violation of the TRIPS Agreement in a trademark case, and for what? (must get both parts correct to score points). Three teams got the correct country, but only one got the correct reason (and that’s because we were generous).

All of the teams got Part B. One team got one correct brand in Part A.

Part C decided the trivia competition. Two teams entered Q16 tied. One team’s answer started “the,” the other started “that”; both otherwise got the answer correct. The difference between “that” and “the” proved to be the difference. An exciting photo-finish to an exciting night of trivia.

The winning team scored 130 points in the final round.

We had five tiebreaker questions that we didn’t use:

* What school hosted the first WIPIP? An easy question in this audience, as some of the participants had attended it.
* What is the first and last name of the individual holding the record for the most US patents issued to him/her in a single day?
* We asked participants to name an elected official depicted in a photo.
* As of March 3, 2013, how many nations are members of the WTO? What country was the most recent to join the WTO? One person in the room got the first question correct. No one got the second question correct.
* For whose benefit, and in what year, was the first Congressional private act extending the term of a copyright enacted? It didn’t appear anyone knew the answer to this question.