Should TheDirty Website Be Liable For Encouraging Users To Gossip? (Forbes Cross-Post)

A major Internet Law battle is brewing in the Sixth Circuit federal appellate court in Kentucky. Potentially at stake is the future of the Web 2.0 ecosystem and user-generated content–which is why many of the Internet’s biggest and high-profile companies have rushed to the aid of a gossip website that many people find reprehensible.

The facts in this case are stranger than fiction, which makes this case an Internet Law classic. The lawsuit is against a website, TheDirty.com, run by Nik Lamas-Richie (f/k/a Hooman Abedi Karamian). TheDirty allows users to submit gossip, which is often about young women and often mean-spirited and misogynistic. Richie selects some user posts, typically adds brief remarks (a sentence or two of snark), and then posts the selected submissions to his website. Due to its large readership and good Google indexing, being featured on TheDirty has the potential to be life-altering.

The plaintiff is Sarah Jones, a former teacher and NFL cheerleader (she was a “Ben-gal”). Jones was featured on TheDirty twice, including allegations that she had a sexually-transmitted disease and had sex with an entire pro football team. Initially she sued the wrong website, TheDirt, and won a multi-million dollar but worthless default judgment. Correcting the error, she subsequently sued TheDirty for defamation.

Normally, lawsuits like Jones’ are preempted by a federal law, 47 USC 230 (Section 230), that says websites aren’t liable for third party content. Section 230 has been referenced in hundreds of cases, most of which have cleanly and unambiguously applied the law to protect websites from liability–even if they exercise editorial control, and even if they know the content could be defamatory. For more on why the Section 230 immunity has been so effective, see this essay.

Despite these legal precedents, in January 2012, the district court rejected TheDirty’s Section 230 defense in a slight and confusing opinion. This allowed the case to go to a jury trial. In the interim, Jones ran into serious legal trouble of her own because she had sex with one of her under-age students. In October 2012, she pleaded guilty to a felony. In a (romantic?) twist, in June 2013 she got engaged to the victim of her crime.

Despite Jones’ criminal behavior, in July 2013 the jury awarded Jones $338,000 in damages (a nice engagement present!). Jury instruction #3 said the jury should hold Richie responsible for users’ submissions–basically, the instruction told the jury to ignore Section 230. For more about the jury award, see TheDirty’s official statement in response to the jury award.

Developments Since The Jury Ruling

This supplemental opinion is one of the oddest judicial opinions I’ve ever seen. Knowing the case would be appealed, and knowing that his rejection of Section 230 grossly deviated from the legal precedents, the opinion seemed designed solely to convince the appellate court to support the judge’s idiosyncratic legal interpretation. To support his arguments, the opinion tendentiously kludges together random comments from those rulings, ignoring both the statute and the main points of the precedent cases. As one of the amicus briefs says, the “district court asserted that its ruling ‘represents the weight of authority’…but that is simply not true. For example, it cited cases from the Seventh and Eighth Circuits that upheld Section 230 immunity, but focused on their dicta.”

Although the August 2013 opinion was a terrible piece of judicial analysis, it should help the cause of justice on appeal because it highlighted how aberrational the judge’s legal interpretations were. This gave TheDirty and its supporters lots of material to critique.

As expected, TheDirty appealed the ruling to the Sixth Circuit Court of Appeals. Earlier this month, TheDirty submitted its initial brief to the court. The law is so overwhelmingly on TheDirty’s side that the brief overflows with examples of how the lower court got it wrong. As the brief acknowledges, “the rules and policy choices established by the CDA are in many ways directly contrary to the long-standing common law principles it abrogated. For that reason, certain aspects of the CDA can be somewhat counterintuitive and hard to accept, as this case plainly illustrates.” 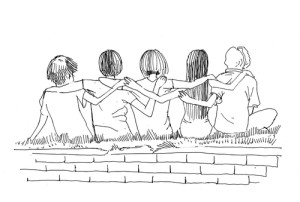 Photo credit: friends embracing each other sitting on the ground // ShutterStock

Last month, four separate amicus (“friend of the court”) briefs were filed in support of TheDirty (see all of the briefs here). The signatories represent a who’s-who of the Internet: Amazon, AOL, eBay, Facebook, Gawker, Google, LinkedIn, Microsoft, TripAdvisor, Twitter, Yahoo, Yelp, Zynga and many others. In other words, virtually every major publicly traded user-generated content company, representing nine of the top 10 United States websites as ranked by Alexa, spoke in support of TheDirty. A variety of non-profit organizations joined the briefs too, including the ACLU, Center for Democracy & Technology, Electronic Frontier Foundation and The Reporters Committee for Freedom of the Press. [Disclosure note: I am a member of the board of directors of the Public Participation Project, which joined the brief led by the ACLU.]

(I’m assuming the Sixth Circuit will allow the briefs. Unfortunately, Jones didn’t consent to the filing of amicus briefs, so the Sixth Circuit has the discretion to reject them. Refusing consent is Jones’ prerogative, but litigants typically acquiesce to opposition amicus briefs rather than try to suppress them.)

Why is virtually the entire Internet industry backing TheDirty in this case? The AOL et al brief explains,

Amici cannot emphasize enough the degree to which the protection afforded by Section 230(c)(1), as consistently interpreted by courts, has played a critical role in fostering the development and growth of interactive services that both empower users and encourage innovation and self-regulation….

Under the protection of Section 230—and consistent with Congress’s intent—interactive computer services that allow users to speak, interact, and transact have experienced tremendous growth in the 17 years since the statute’s enactment. The Amici are now household names with hundreds of millions of users, and collectively they serve as platforms for billions of dollars in transactions among users annually and innumerable communications in the forms of postings, tweets, blogs, comments, and other third-party expression. Some or all of the Amici might have to change their business models or curtail their services in significant ways if the prevailing interpretation of Section 230 were narrowed….

Congress created a regime that removed legal disincentives to self-regulation of objectionable content, while at the same time declining to impose government regulation imposing particular steps a service provider must take to remove third-party content. The prevailing interpretation of Section 230 implements Congress’s policy choice; the district court’s interpretation would undermine it.

The comments posted to TheDirty about Sarah Jones were unacceptable, but to me the real tragedy in this case is the judge’s obvious legal error. The district court’s refusal to apply the law represents a bad form of judicial activism that breeds disrespect for the judicial system and wastes everyone’s time and money. As the online service providers nicely summarize:

Since its enactment, federal and state courts have interpreted [47 USC 230] to provide broad immunity to providers for claims stemming from user content. The district court departed from this well-established precedent, apparently because of its distaste for the defendants’ website, TheDirty.com.

Lawsuits shouldn’t be a referendum on whether or not judges–or society–like gossip websites. By turning the case into a platform to advance the judge’s personal agenda, the judge did a great disservice to the litigants and to the Internet community as a whole. I remain hopeful the Sixth Circuit will recognize this case for what it is–an easy defense win.

My prior blog posts on TheDirty’s litigation: