By Jake McGowan with comments from Eric

[Eric’s preliminary note: it’s taken me weeks to review this blog post, so I’ve been keeping poor Jake in a holding pattern. Still, I hope the wait is worth it.]

The real estate listings industry has become increasingly concerned with competitive “scraping” by multiple listing service websites. After all, MLS owners make money by exploiting an information asymmetry–they charge participating brokers and agents for access to the database listings. If a website legally scrapes and distributes the MLS’s data, it destroys the valuable information asymmetry and thus hurts the listing services’ revenues. 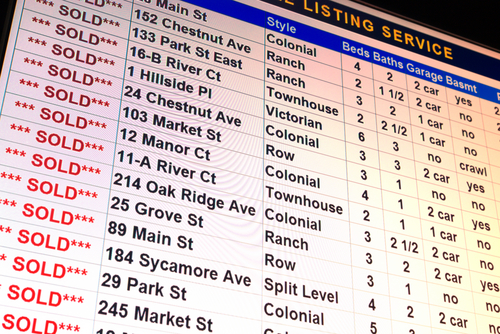 For these reasons, some MLS sites have tried to squash this type of competition by taking the scrapers to court for copyright infringement. But the listings in question often consist largely of photographs and generic descriptions. Does copyright even apply in the first place?

First, courts tend to enforce copyright protection for photographs in this context. Earlier this year in Pacific Stock, Inc. v. MacArthur & Company, Inc., Pacific Stock went after the owners of a website that scraped real estate listing photographs and used them on the site without a license. The court entered default judgment against the website and its operators.

While photographs often satisfy the originality requirement, questions linger as to whether courts should protect seemingly generic listing information.

In recent cases like Allure Jewelers v. Mustafa Ulu, we have seen defendants make similar arguments (i.e., that copyright does not protect the information in question). Allure involved a dispute between competitors over whether descriptors for jewelry are protectable. Unfortunately, the court did not go into depth about the originality argument; it dismissed Allure’s claim for failure to obtain registration before filing suit.

The narrative public/agent remarks describe the property, but also contain a bit of puffing and tailoring toward a target audience.

The “field descriptors,” on the other hand, are usually bare factual statements that describe the property in generic terms.

RMLS alleged that AHRN infringed its copyrights for all of this content by scraping the data (either from NorthStar or its licensees) and reproducing it on NeighborCity.com. Although the court did not enter a full discussion of the copyright interest in the textual elements of a MLS database, it still shed some light on whether those elements were sufficiently original to warrant protection in any event.

The court held that the narrative “agent remarks” and “public remarks” were likely copyrightable:

As with other types of copyrights, creativity must exist to protect a compilation . . . These remarks are uniquely-phrased descriptions of property, highlighting those parts of a property that might be most attractive to agents and the public[.]

The court also held that RMLS was likely to succeed in showing “irreparable harm” because NeighborCity detracts value from NorthStarMLS. In addition, RMLS contracted with the brokers under the expectation that it would not distribute any of the listing content without permission from the brokers. Thus, if RMLS didn’t go after NeighborCity, their reputation and goodwill may have suffered.

As for the scope of the injunction, the court refused to grant protection to the field descriptors:

The descriptors do not seem sufficiently creative to warrant protection, especially one-word descriptors such as “deck” and “patio” . . . There are limited ways of expressing the basic facts included in these field descriptors, suggesting these expressions by RMLS are not copyrightable.

Since then, AHRN filed its answer and asserted counterclaims under federal and Minnesota antitrust law:

The concerted effort to suppress competition from companies like AHRN depends in large part on the ability of RMLS and other MLS’s to . . . intimidate potential competitors with threats of copyright enforcement litigation – despite knowing that much of the information over which they claim copyright privilege is not copyrightable, not properly registered in compliance with the Copyright Act, or not owned by them.

AHRN just can’t catch a break. The company is also currently a defendant in another copyright case extremely similar to the one discussed above—this time brought by Metropolitan Regional Information Systems (MRIS).

MRIS moved for a preliminary injunction, which the district court ultimately granted. After AHRN filed a motion to clarify the scope of the injunction, the court cited factual disputes about the underlying textual elements and thus specified that the injunction applied only to the photographs in the database.

The Court had originally enjoined AHRN from:

The court concluded that the language in the order was not sufficiently specific under FRCP 65, especially since the court based its order on the copyrighted photographs.

But although the textual elements were part of a compilation that had the requisite level of originality, MRIS had not shown that AHRN copied such textual elements. There was still a factual dispute as to whether AHRN copies the database wholesale as part of its operation. For this reason, the court declined to expand the scope of the injunction beyond MRIS’s copyrighted photographs.

To the contrary, MRIS has demonstrated a likelihood of success on the merits that the MRIS Database exhibits the requisite originality for copyright protection.

But the court did also mention that copyright interests in factual compilations are “thin.”

Like in the RMLS case, AHRN subsequently filed antitrust counterclaims.

Initially, it’s worth noting that photographs receive unique treatment in the infringement analysis. The court has no trouble concluding that a competitor potentially infringes when it copies the photos.

These cases both seem to stand for the idea that the textual elements are sufficiently original to qualify for copyright protection—albeit “thin.” Drawing the line in the sand at the “field descriptors,” the RMLS court recognizes the psychological difference between lists and narratives from the perspective of the reader. Although these “narratives” might be broken sentences with generous amounts of typos, they evoke certain emotions that bare facts cannot and require some original thought. They might even be useful to an agent who is pondering their best sales pitch. For these reasons, they clear the originality bar (though not by much). [Eric’s note: re copyrighting language that’s the most effective sales language, see Webloyalty.com, Inc. v. Consumer Innovations LLC.]

By setting the bar relatively low for originality, this decision may lead to more copyright-based attacks on these MLS competitors as a way of suppressing competition. This prompts a bigger question: how much value does the “narrative” aspect of these sections add to these sites?

If customers don’t care about the “narrative” aspect of the sites, then this decision may not pose as much of a threat to these listing scraper sites–it seems that as long as they don’t use the photographs or copy any original narratives, they are less vulnerable to a copyright infringement suit. This prompts yet another question for these plaintiffs—given the “thin” nature of protection, is a lawsuit really worth it? We’ll have to wait and see.

Scraping always raises interesting policy and theory issues, so from that standpoint I’m disappointed we don’t see more scraping lawsuits or rulings. These two NeighborCity rulings are among the cleanest to date addressing the copyright implications of scraping, and they show just how hard it is to run a legally permissible scraping-based business. Here, the real gotchas are photos–always a liability trap–and the kicker is that the MLSs are taking copyright ownership in the photos enough to have standing.

In the Northstar case, the court is fairly clear that the MLS doesn’t always take 100% ownership and NeighborCity is free to approach the co-owner for the license. Recognizing the logistical difficulties of doing so, so long as the MLS can engage in legal shenanigans like taking a meaningless ownership stake in photos, the MLS can use that ownership stake as an impressively effective anti-competition tool. I was disappointed in the Northstar case how tone-deaf the judge was to the competitive issues at stake. It seemed like once the MLS established its status as a copyright owner, all competition-related issues got turned off. That’s troubling from a policy standpoint.

1) As discussed in this post, MLSs, as database aggregators, taking copyright ownership interests in broker-supplied photos/”product shots” to suppress competition from other aggregators

3) Scott v. WorldStarHipHop and related cases (such as Katz v. Chevaldina) where the subjects of photos/video who are unhappy with their depiction buy the copyrights to the photo/video and then send copyright takedown notices in a synthetic right-to-forget campaign.

4) Medical Justice encouraging doctors and other healthcare providers to take copyrights in written patient reviews of them to have the power to veto those reviews.

To me, the trend is clear. People are monkeying with copyright ownership to achieve purposes that copyright law was never designed to accomplish. I haven’t yet figured out a fix for this, but if we aren’t careful, this copyright ownership hack will moot many other important social and policy balances we’ve tried to strike elsewhere in the law.

Two other interesting things from these rulings:

2) The Maryland case upheld the validity of an electronic copyright (204(a)) ownership assignment per E-SIGN, favorably citing Hermosilla case. (The court says that, using an online clickthrough agreement “satisfied the signature requirement of E-SIGN and Section 204(a)”). I think this is the right result, but it shows just how easy to accomplish the copyright ownership hack.