Got a Selfie With a Celebrity? Think Twice Before Using It In Ads–50 Cent v. Kogan

This is yet another blog post about 50 Cent a/k/a Curtis Jackson. This time, he “happened to be in the proximity” of the defendant’s cosmetic surgery clinic. Doing what, exactly? The opinion doesn’t say. While he was fortuitously in the neighborhood, “At Kogan’s request, Jackson posed for, and took, a picture with Kogan in front of a backdrop stamped with the words ‘PERFECTION MED SPA’ throughout.”

50 Cent says he thought Kogan wanted the photo for “her own private enjoyment.” Ha! MedSpa has 300k+ Instagram followers and Kogan has 100k+ herself, so you better believe that photo was going online. MedSpa posted it to Instagram with the following text: 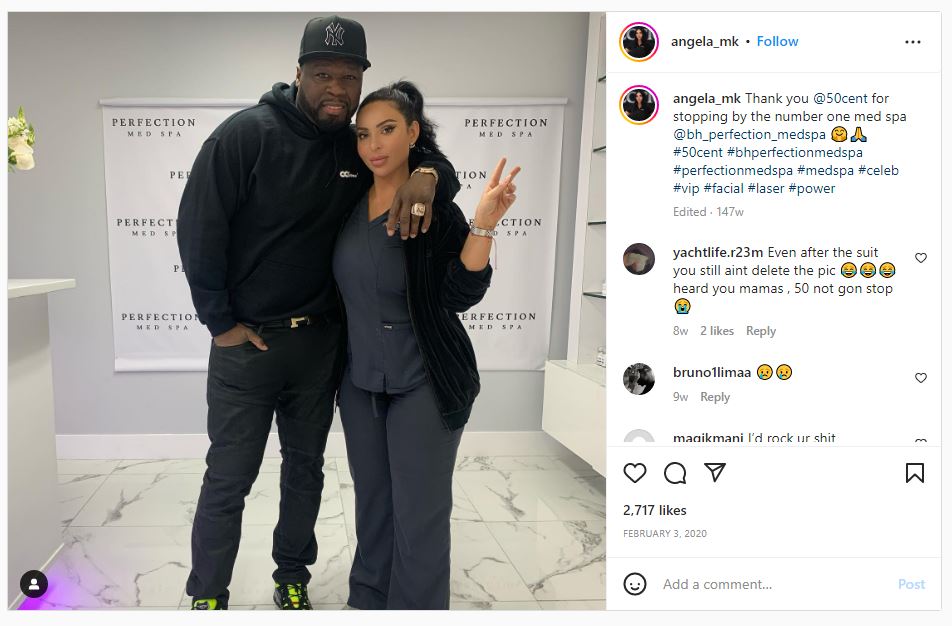 MedSpa and Kogan published the photo other times as well.

In addition, Kogan did an interview with “The Shade Room” about the popularity of penile enhancements. When that article was tweeted, it displayed a thumbnail image showing side-by-side the 50 Cent photo and a photo showing a penile enhancement procedure with the goodies hidden by an eggplant emoji. (BBL means Brazilian Butt Lift). 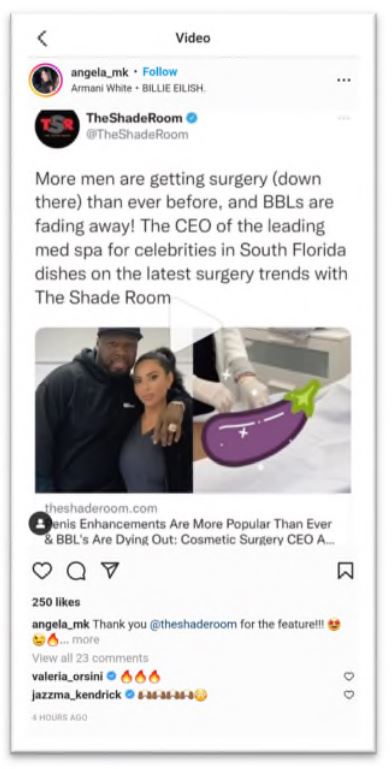 Kogan also created and posted a video discussing (and showing) the article, including more innuendo that 50 Cent got the procedure.

50 Cent sued because the “posts falsely suggest that he received penile enhancement surgery from MedSpa at the expense of his reputation and dignity.” The defendants moved to dismiss. The court rejects the motion.

Both the Tweet and the article, which appear in the video posted by the Defendants, indisputably place Kogan’s photo with Jackson next to images and text that promote penile enhancement surgery and the Defendants’ business. Because the Defendants took it upon themselves to post the video onto their Instagram accounts, Jackson can plausibly argue that the Defendants unauthorizedly used his likeness to promote their business regardless of whether the Defendants had any role in TSR’s publication of either the Tweet or the article.

The court sidesteps whether the Instagram posts violated 50 Cent’s publicity rights, simply accepting 50 Cent’s assertion at this stage of the proceedings.

[The false endorsement] is made evident by a comment to one of the Defendants’ first posts of Kogan’s photo in which an Instagram user deduces that Jackson was the Defendants’ paid promoter. Even more clear are the crude comments connecting Jackson to Defendants’ penile enhancement services, which followed the Defendants’ video publication. Again, Instagram users publicly responded with comments like “@50cent Can I see the before and after pics?”, “Call him 50 inch [ ]”, and “Why they got 50 cent up there talking bout [ ] enlargement[.]”

The paid promoter comment sounds relevant to the false endorsement claim. The “crude comments” are not.

the Defendants’ “thanks” serves as a humblebrag. It is self-promotion. But even if the Court afforded the “thanks” portion of the caption no promotional value, the remainder clearly promotes the Defendants by referring to MedSpa as “the number one med spa” and associating it with a “#celeb” and “#vip.”

Jargon watch: this is the first instance of the term “humblebrag” I can find in a court opinion.

It’s interesting to see the court’s reaction to standard Instagram tag-spam. I always view those as clutter, but the court is correct that they have a promotional objective.

The court also notes that “Both the video and the article surround the photo of Jackson with images and text that promote penile enhancement surgery and the Defendants’ business. An implied endorsement is, at minimum, reasonably deducible.”

We’ll see if the court’s tone changes when the case moves to summary judgment.

This case reminded me a little of Schwartzwald v. Oath, a copyright case involving a photo showing a bulge in Jon Hamm’s crotch. Why is everyone so obsessed with celebrity men’s schlongs? (Yes, I know it’s even worse for women–I don’t mean to downplay that).

This opinion raises more questions than it answers. Some of the things on my mind: