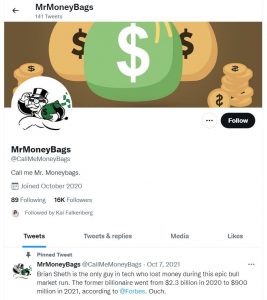 This case involves a pseudonymous Twitter account, “@CallMeMoneyBags.” The account tweeted some remarks, including photos, critical of billionaire Brian Sheth. Soon after, an entity called Bayside asserted copyright ownership of the photos and sent 512(c)(3) takedown notices to Twitter followed by a 512(h) subpoena to unmask CallMeMoneyBags. Bayside claims Sheth doesn’t own the entity, but circumstantial evidence, combined with Bayside’s lack of candor, strongly suggest some ties between Sheth and Bayside. Twitter sought to quash the subpoena. The magistrate judge upheld the subpoena. The supervising judge overturns it.

Although the case nominally involves copyrights, the court sees it as a First Amendment case:

when adjudicating a subpoena or other request for compelled disclosure that would reveal the identity of an anonymous speaker, a court should (1) notify the speaker and provide them with an opportunity to (anonymously) defend their anonymity; (2) require the party seeking disclosure to make a prima facie showing on the merits of their claim; and (3) balance the equities, weighing the potential harm to the party seeking disclosure against the speaker’s interest in anonymity, in light of the strength of the underlying claim.

Bayside resisted this test on several grounds. First, Bayside says that 512(h) subpoenas are different. The court responds: “Bayside’s reading of the DMCA raises serious constitutional concerns.” Further, 512(h)’s statutory language incorporates FRCP 45, which the court says permits quashing “on the basis that the subpoena would require disclosure of material protected by the First Amendment.”

Second, Bayside said that copyright already accommodates First Amendment considerations via the fair use defense (citing the Reddit case). The court says that sometimes fair use doesn’t cover all First Amendment considerations “because it is possible for a speaker’s interest in anonymity to extend beyond the alleged infringement.” For example, when speakers have made many posts against multiple targets, and the alleged infringement would expose the author indiscriminately.

Third, Bayside said that it should win because the accountholder no-showed in court. The court says there are many reasons why a pseudonymous accountholder might no-show, and that’s why the service (Twitter in this case) can assert its users’ First Amendment rights:

As a platform that permits anonymous posting, Twitter risks losing users if people learn that the company discloses users’ identities to anyone who asks. Moreover, Twitter’s interest in this dispute aligns with that of MoneyBags; both have an interest in protecting MoneyBags’s ability to speak his mind on Twitter without facing retaliation. Finally, there are genuine obstacles to MoneyBags’s participation, given the expense of litigation and the lack of a contrasting economic incentive in this suit

All told, the court says this is fair use. The court might have cited the Watch Tower v. McFree case, also finding fair use in critical commentary as part of quashing a 512(h) subpoena, but didn’t do so.

“Even if Bayside had made a prima facie showing of copyright infringement, the subpoena would still need to be quashed because the balance of equities tilts in MoneyBags’s favor.”

Unmasking MoneyBags thus risks exposing him to “economic or official retaliation” by Sheth or his associates. And MoneyBags’s interest in anonymity is heightened further by his other tweets, which discuss issues of political importance such as sexual harassment, tax enforcement, and corporate regulations

Plus, due to Bayside’s lack of candor, the court couldn’t be confident that Bayside is independent of Sheth, and “It is not clear what Bayside has to gain from pursuing a copyright action against MoneyBags.” Thus, “even if Bayside had made a prima facie showing of copyright infringement, the Court would quash the subpoena in a heartbeat.”

This opinion advances the 512(h) jurisprudence in two important ways. First, it establishes that there’s a First Amendment defense independent of copyright’s defenses (an improvement on the Reddit ruling, which relied solely on fair use). Second, it establishes that the service can independently assert the First Amendment defense on behalf of its users. We don’t see a lot of 512(h) litigation, so I don’t expect this scenario to come up often, but it’s nice to know that services have this option.

It’s striking that Twitter chose to fight this subpoena to protect its pseudonymous users, especially when the user didn’t participate. Many services would have simply turned over the information or, at most, given the user a chance to intervene. Twitter’s decisions to proactively invest money into this litigation reflects its “free speech” ethos–the same one that Musk keeps complaining that Twitter lacks. Would a Musk-owned Twitter have made the same decision to fight for its users even if it’s not profitable?  I think it’s far more likely a Musk-owned Twitter will shrink, not expand, Twitter’s free speech protections for its users.

There are two sets of statements by Petitioner at issue: (1) that Respondent Boudet “groomed minors” and (2) that he engaged in plagiarism…Reviewing the materials submitted by the parties, it is clear that both statements were made based on facts discussed in the subject subreddit. The “grooming” discussion occurred in the context of a post by “U/boudettaway” that Boudet groomed “her.” I previously heard a motion to enforce a subpoena seeking to unmask U/boudettaway and recommended the Court do so, and the Court adopted that recommendation. The key difference between that case and this one is that Ulboudettaway asserted or implied objective facts, which made it mixed opinion under Krinsky. Here, there is no indication that Petitioner’s comments were based on any alleged facts that were not publicly known or available to anyone who saw the post by U/boudettaway or other commenters in that thread. Even if U/boudettaway made false statements that are potentially subject to defamation liability, without asserting or implying independent facts, Petitioner does not somehow accede to that potential liability by repeating or discussing those statements. Holding otherwise would expand defamation liability to people who merely repeat what they have heard from others but for which they assert no independent knowledge. Krinsky held that this would be inappropriate. Likewise, the comment about plagiarism follows a post that linked to a Rolling Stone article and suggested that Respondent “mostly copied it word for word.” Members of the public can compare the linked article and Respondent’s posts, so these are matters available to a reader or member of the public. While Petitioner and Respondent may disagree over whether there was sufficient overlap to qualify as “plagiarism,” this is pure opinion of the sort discussed in Krinsky. Applying Krinsky’s command to view the allegedly defamatory communications in context, they are protected opinion.

Leading to an anti-SLAPP fee shift of $30k.