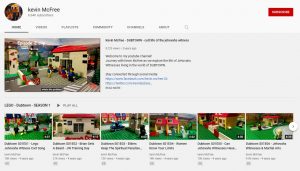 A “lapsed” Jehovah’s Witnesses member, using the alias “Kevin McFree,” posted YouTube videos using stop-animation of Lego figurines to criticize the Jehovah’s Witnesses. The IP arm of the Jehovah’s Witnesses (the “Watch Tower”) claimed that one such video, the “Dubtown Video,” infringed its copyright by incorporating snippets of its videos. It sent a 512(c)(3) takedown notice to YouTube, which YouTube honored. Watch Tower then sought a 512(h) subpoena to identify McFree. McFree sought to quash the subpoena.

The court says the Dubtown video wasn’t copyright infringing because of fair use:

Without any copyright infringement, the court quashes the subpoena. This is good news for Kevin McFree. However…

This litigation started June 2018, and it took 3.5 years to reach this point. TorrentFreak noted this delay last year. The court doesn’t otherwise explain what took so long. In the interim, Watch Tower brought a copyright infringement suit directly against McFree, doubling down on its legal position and increasing the costs and hassles borne by McFree. (This ruling ought to make the infringement lawsuit untenable).