eBay Must Disclose User Identities In Response To 512(h) Subpoenas 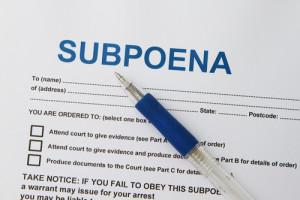 Photo credit: Close up picture of Subpoena with pen // ShutterStock

Barry Rosen is a photographer (especially of dogs) and repeat copyright enforcer (see, e.g., our previous coverage of his litigation here and here). His lawsuit against eBay produced an interesting 512 safe harbor ruling earlier this year. Meanwhile, eBay and Rosen have been tussling over his efforts to identify eBay’s allegedly infringing users. Earlier this year, Rosen sent eBay 512(c)(3) notifications that eBay apparently honored. Rosen followed up by securing 512(h) subpoenas to identify those eBay users.

eBay moved to quash the subpoenas. It cited the 2011 case Maximized Living v. Google, which suggested that if the service provider already removed items in response to 512(c)(3) takedown notices, the service provider could ignore any resulting 512(h) subpoenas based on those items. That ruling seemingly eviscerated 512(h) because copyright owners rarely can get 512(h) subpoenas before service providers have processed the underlying 512(c)(3) takedown notices. When we originally blogged the case, both David Gingras and I criticized the ruling (I called it “goofy”; David said “it’s extremely clear the court make the wrong decision”).

This court doesn’t like the Maximized Living ruling either. The court concludes that “the allegedly infringing material [does not need to] remain available, after notification, for an enforceable DMCA subpoena to issue for identifying information of the alleged infringer under § 512(h).” Thus, even though eBay already honored the 512(c)(3) takedown notices, eBay still must comply with the 512(h) subpoenas. For the same reasons that persuaded this court, I doubt we’ll see many other cases following the Maximized Living reasoning.

The court rejects this request as overbroad because some of the accounts could go back 15 years and thus include stale information. The statute only requires eBay to produce information “sufficient to identify the alleged infringer.” Rather than make the parties hash out what that means, the court defines eBay’s obligation to include:

As far as I can recall, this is the first time a court has interpreted what 512(h) considers to be information “sufficient to identify the alleged infringer.”