May 4, 2022 · by Eric Goldman · in Copyright, Derivative Liability, Marketing

“Plaintiff contends that Pinterest has infringed the copyrights of 51 of his works by displaying these works in proximity to advertisements and by displaying and distributing them to users via notifications.” The court gives this screenshot as an example. Davis’ copyrighted work is the red rose photo (“Kiss from a Rose”) in the upper left. You’ll see to its immediate right an advertisement (a promoted pin). 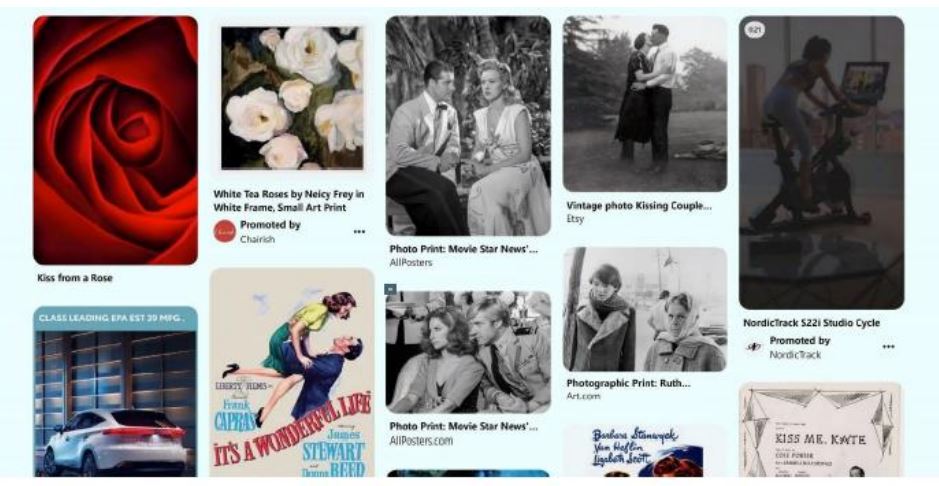 The court previously dismissed the contributory infringement claim. The court now grants Pinterest’s summary judgment motion to dismiss the rest of the case because “the Court finds that the DMCA safe harbor applies to the facts of this case.”

[Note: the plaintiff’s arguments in this case are so goofy that I had to doublecheck if the plaintiff was proceeding pro se. Nope. He was represented by lawyers–5 of them, in fact–including this lawyer as lead counsel.]

Pinterest sent an interrogatory asking the plaintiff to identify the instances of infringement on its service. The plaintiff sent a spreadsheet identifying alleged infringements for 35 of the 51 works-in-suit in Pinterest’s feeds, but he repeatedly attempted to claim that the spreadsheet was only representative of his total infringement claim and that Pinterest’s delayed discovery responses hindered him from identifying more infringements. (The court rejects any attempt to base infringement claims on Pinterest’s notifications, which only hyperlink to the works). The court is unimpressed with the plaintiff’s story. If it mattered, the only works in play would be the 35 documented on the spreadsheet. But, it doesn’t matter because 512(c) ends the case.

User infringements. The plaintiff doesn’t base the infringement claims on user uploads, Pinterest’s reformatting of uploaded images for compatibility purposes (what the litigants call “variants”), users pinning photos, or algorithmic search results. Instead, the plaintiff “narrows the purportedly ‘infringing activity’ in this case to the creation of variants, the ’embedding’ of these variants with data for Pinterest’s advertising algorithms, and the display of these variants in proximity to advertisements on the platform.”

The plaintiff claimed that Pinterest embedded metadata into user-uploaded photos to improve ad delivery in conjunction with those photos. The court says the proffered evidence doesn’t support that assertion.

Algorithms. “Plaintiff offers no case law to support his theory that the use of computer algorithms to analyze user engagement and to tailor advertising prevents the application of the § 512(c) safe harbor….To the extent that Plaintiff suggests tracking user activity through  algorithms or displaying advertising on the platform is somehow copyright infringement, he offers no support for this novel theory.” The court also calls out the plaintiff for trying to do an end-run around the 512 notice-and-takedown scheme: “rather than notify Pinterest of alleged copyright infringement on its platform so Pinterest can remove it, Plaintiff wants Pinterest to continue to display his images on its website and mobile application, but he does not want Pinterest to profit in any way from doing so.” Finally, the court acknowledges the plaintiff’s monitoring/policing burden due to the notice-and-takedown scheme. “But Congress, not this Court, decided as a policy matter who should bear the burden of identifying infringement in the first instance.”

Stored at User’s Direction. Per the Veoh case, services “may enhance users’ accessibility to uploaded content without losing protection under § 512(c).”

Back to The Algorithms, the court says:

Neither tracking users’ activity nor displaying advertising near Plaintiff’s works violates Plaintiff’s exclusive rights. But even if this did constitute infringing activity, such conduct would still fall within § 512(c)’s protection….As in Viacom, this helps facilitate users’ access to Pins. Moreover, even if using algorithms to promote advertising could somehow be problematic, the evidence in this case indicates that the algorithms used to identify and display organic Pins are separate from the algorithms used to identify and display promoted Pins in a user’s feed. The algorithms that select whether and how to display Plaintiff’s works in Pinterest’s feeds are thus still promoting user access to user-uploaded content.

Plaintiff appears to dislike that Pinterest obtains revenue from advertisements on its platform, on which Plaintiff’s artwork also appears. However, courts have not withheld safe harbor protection simply because service providers advertise on their platforms alongside user-uploaded content.

The last sentence is stated innocuously, but it bears reinforcement. It’s incredible to think in 2022 that ad-supported UGC services don’t qualify for 512 given how many have done so to date. The court cites to the Veoh and Motherless cases.

Right and Ability to Control. The Ninth Circuit’s standard for this element is when services “exert substantial influence” on user activities–a baffling standard. To this court, it’s an easy call, however. “Users upload content, and Pinterest does not direct them to upload any specific content.”

Financial Benefit. The plaintiff kept bringing up The Algorithms, but the court replies: “Pinterest uses distinct algorithms to determine the layout of organic Pins and promoted Pins in the same feed. Therefore, despite Plaintiff’s suggestion, neither advertisers nor Pinterest can target advertisements to appear near any specific organic Pin. Pinterest’s advertisements are instead tailored to the Pinterest user….such targeting does not generate revenue ‘directly attributable’ to Plaintiff’s works.” If it stands, this is a nice ruling about the interplay between behavioral targeted advertising and vicarious copyright infringement/512. However, it leaves open the idea that contextual targeting could be “directly attributable,” which would be an ironic result because many people would prefer that ad-supported sites use contextual targeting rather than behavioral targeting.

I assume this case is on its way to the Ninth Circuit.