This case involves Roblox, a virtual world. Allegedly, a majority of Roblox users are under 13. Roblox has an in-game currency, Robux. Users can manufacture virtual items in-game, and other users can buy those items using Robux, with Roblox taking a cut of the transactions. As I read the opinion, if Roblox discovers a virtual user-made item violates its TOS, Roblox nukes the item…but apparently didn’t refund the buyers’ money, so buyers lost both their money and the item. (The buyer also claims that Roblox deletes items to induce buyers to buy them again).

I doubt anyone has a problem with Roblox nuking violative items. Indeed, I’m sure many critics feel Roblox should be more aggressive on that front. However, Roblox’s policy not to refund buyers in those circumstances is head-scratching–especially when so many buyers were pre-teen. After this lawsuit was filed, Roblox perhaps recognized its untenable position and refunded buyers; it even offered to pay reasonable attorneys’ fees. Apparently these moves didn’t satisfy the buyers/plaintiffs’ lawyers, who pressed on with the lawsuit.

The moves also didn’t satisfy the judge. This opinion is filled with bad news for Roblox.

Contract Formation. Roblox’s TOS said that “Roblox may ‘at any time and without prior notice, screen, remove, edit, or block any [User Generated Content (‘UGC’)] that in our sole judgment violates these Terms or is otherwise objectionable’ and that the user agreed ‘to waive, and do waive, any legal or equitable right or remedy you have or may have against us with respect to UGC.'” Other favorable TOS provisions include a class action waiver and a 60-day negotiation period before filing suit.

None of this matters. The court says the TOS formation failed with the named plaintiff in part because the formation process wasn’t sufficiently clear to minors.

Here is the TOS formation screen: 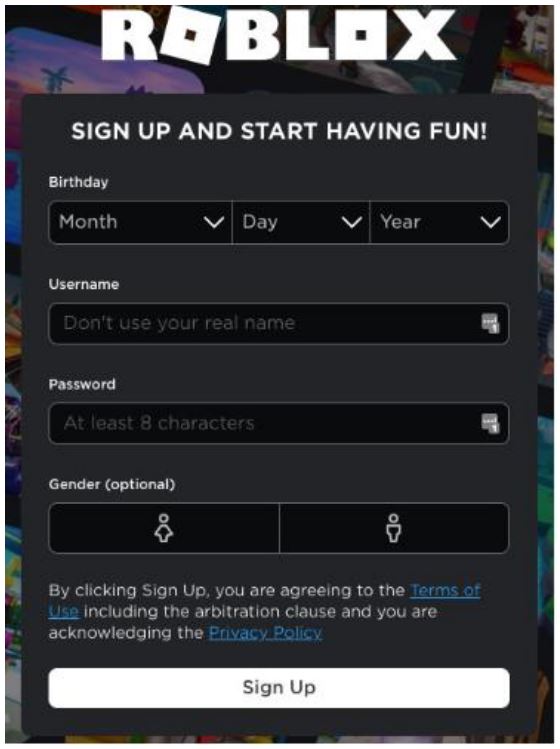 This looks like a typical clickthrough formation process (a/k/a “sign-in-wrap”…blech) that I’d normally rate as 90% likely to succeed. Roblox could have bumped up the enforceability to 99% with a second click; indeed, the court cites the absence of the second click against Roblox. (Reminder: a second click is best practice because it reduces risk of contract formation failure, like what happens here). Even so, as applied to an adult audience, this formation process probably works.

However, the named plaintiff was 10 at the time of TOS formation, and the court says this matters: “Even if the notice would be sufficiently conspicuous and understandable for an adult, it is not for a child….A child—even a reasonably prudent one—would not be on inquiry notice that she was assenting to an agreement from this set of facts.” The court makes it clear that it’s not voiding the contract due to the minor status; it’s adjusting the “reasonably conspicuous” standard to reflect Doe’s minority.

(There is a related but unanswered question here: COPPA spells out formation requirements for under-13s, including the need for parental consent. I’m not clear how Roblox was complying with COPPA and why that process didn’t cure the TOS formation failure. The plaintiffs alleged “Roblox does not include any sort of age-related protections that some other websites use, such as requiring parental permission,” but that allegation suggests an obvious COPPA problem).

As a result, the TOS fails. This knocks out the pre-litigation negotiation requirement, the TOS’s protective provisions, the TOS’s disclosures, the TOS’s licenses (which nukes Roblox’s defense to a conversion claim), and more. The court doesn’t specify what contract terms gap-fill in the TOS’s absence, but those default rules won’t be as favorable to Roblox as their TOS.

Section 230. Roblox invoked Section 230 as a defense. The court disagrees:

Doe does not seek to treat Roblox as a publisher or speaker of the user-generated content. Liability would instead attach for Roblox’s own failure to disclose that it can delete previously purchased items with no warning. Roblox is essentially functioning as a seller of virtual merchandise, not a publisher of information [cite to HomeAway]

“Failure to disclose” is a troubling workaround to Section 230 because plaintiffs can always creatively style their claim this way. Also, Roblox’s TOS seemingly did make the disclosure, but the court apparently treats TOS’s failure as mooting the disclosure.

The court distinguishes the Coffee v. Google loot box case because this lawsuit “does not seek to tell Roblox what it can and cannot post from third parties; it seeks instead to have Roblox disclose to consumers that it has the ability to delete purchased content.”

UCL. Doe lost money. “While Roblox cites cases that have held that purchases of in-game currency are not a sufficient economic injury in some circumstances, they did not address a situation based on a failure-to-disclose claim. Many are premised on the idea that consumers got exactly what they expected, they just did not like the results.”

15 years ago, one of the buzziest cyberlaw topics was ownership of assets in virtual worlds, like property acquisitions in Second Life. Lots of academics and bloggers wrote about the topic, but we had very few actual court cases addressing it. All you Second Life pundits, here’s an opinion you were waiting for!

Standard online account termination and content removal discretion looks weird when consumers buy in-game/in-world virtual assets. This issue puzzled me for years because those buyers spend their money knowing it’s predicated on a shaky TOS foundation, eventually resulting in this article. Today, I think it’s clearer that services may not be able to freely terminate users or remove paid-for items without making the users financially whole–or at least having a solid TOS warning users of the risks of losing their money.

Once the court struck down Roblox’s TOS, many of its defenses fell apart. I have stressed many times over the years: FAILURE ISN’T AN OPTION WHEN IT COMES TO TOS FORMATION. That’s why you need two clicks, not one, for formation–better safe than sorry. And as this opinion indicates, if your clientele involves minors, you need a kid-friendly interface; adult-focused UI tactics may not cut it.

BONUS: Compare K.F.C. v. Snap, Inc., 2022 WL 871996 (7th Cir. March 23, 2022). KFC was 11 when she signed up for Snap. Snap restricts accounts to 13+, but she lied about her age. She later sued Snap for allegedly violating BIPA violations. Snap sought arbitration per its TOS. The court says KFC’s contract with Snap is voidable, not void, so any questions about defenses to contract formation go to arbitration. Cite to IC v. StockX.