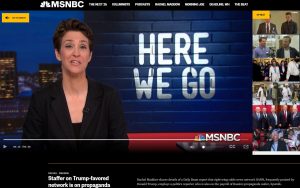 This lawsuit involves the Rachel Maddow Show on MSNBC. Based on a story from the Daily Beast, Maddow ran a segment claiming that an OANN employee was on the Kremlin’s payroll, concluding that OANN “really literally is paid Russian propaganda.” OANN didn’t take kindly to this assertion and sued Maddow and others for defamation. Maddow sought an anti-SLAPP motion to strike, which the district court granted. The Ninth Circuit affirms. As a result, OANN will be writing a check to Maddow for bringing this lawsuit.

the broad context of Maddow’s show makes it more likely that her audiences will “expect her to use subjective language that comports with her political opinions.”…Although MSNBC produces news, Maddow’s show in particular is more than just stating the news—Maddow “is invited and encouraged to share her opinions with her viewers.” In turn, Maddow’s audience anticipates her effort “to persuade others to [her] position[] by use of epithets, fiery rhetoric or hyperbole.” Therefore, the medium through which the contested statement was made supports Maddow’s argument that a reasonable viewer would not conclude the statement implies an assertion of fact.

This is true with respect to this specific segment:

Maddow’s gleeful astonishment with The Daily Beast’s breaking news is apparent throughout the entire segment. Thus, at no point would a reasonable viewer understand Maddow to be breaking new news….A reasonable viewer would be able to differentiate between Maddow’s commentary and the actual news she is reporting….Because Maddow discloses all relevant facts and employs colorful, hyperbolic language, we conclude that the specific context of the statement does not render it an assertion of fact.

So what would it take for Maddow to commit defamation? If viewers of her show always assume she’s sharing her hyperbolic opinions, she can pretty much say whatever she wants without liability. Her show becomes a defamation-free zone.

This reasoning doesn’t apply just to her show. Many broadcast hosts follow the same formula. So long as the newscasters cultivate a reputation for opinionated hyperbole and gesture towards someone else’s materials, the court implies they can say pretty much anything about it they want. Indeed, Fox News recently escaped liability for broadcasting COVID misinformation with similar legal arguments.

I imagine some of you are more sympathetic to Maddow than, say, hosts at Fox News. However, I see both of them, and everyone else occupying the same space, as indicators of a pathology. Cable news shows occupy the bizarre space where viewers treat them as journalism relaying actual news, but the courts treat them as opinionated entertainment that viewers don’t take seriously. So long as that dichotomy persists, any efforts to clean up misinformation in our society are doomed.

BONUS: The Internet is also a defamation-free zone. This lawsuit involves this post, reporting on allegations that the plaintiff committed domestic violence. The plaintiff sued for defamation. The district court granted summary judgment for the defense. The appeals court affirms, saying:

the blog contained cautionary terms that relayed to the reader that the author was “indulging in speculation.” The judge, who clearly reviewed the entire blog, wrote that the blog article contained the following additional language: “She’s saying he head butted her. She’s also accusing him of killing their dog. Not good if true. But there’s two sides to every story”; “You have to be careful with these domestic abuse stories. Your initial instinct is often to believe the battered woman. I know it was Turtleboy’s. But at the same time, we don’t know these people. And some chicks are capable of anything”; “Nothing about this story makes much sense, and if you’re keeping score, she’s winning in the court of public opinion”; and “If I can easily picture these two cheesehogs going at it, and her getting up in his grill and smacking him a couple of times, and their heads banging into each other, [then] so can any real life juror.” Given these cautionary statements, in particular the comment “But, there are two sides to every story,” we likewise conclude that the context of the blog puts the reader on notice that what is being read is opinion.

Apparently, indulge in speculation and a little both-siderism and you earn a get-out-of-defamation-free card.