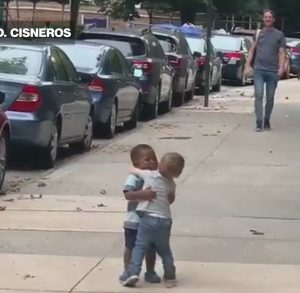 This case relates to a joyous and heartwarming video you’ve probably seen, where two 2-year-old boys–one black, one white–run up to each other, give each other a big hug like they are long-lost friends, and then run down the sidewalk together in a playful spirit.

A Trumpster, Cook, remixed the video (I’m having a hard time finding it online because several services banned the remix). The court describes the remix:

AMERICA IS NOT THE PROBLEM . . . FAKE NEWS IS. IF YOU SEE SOMETHING, SAY SOMETHING. ONLY YOU CAN PREVENT FAKE NEWS DUMPSTER FIRES.

(Exemplifying standard Trumpist projection, the remixed video with a fake CNN chyron warns viewers to be careful of fake news….? This kind of brazen duplicity caused my brain to warp daily during the Trump era).

Trump tweeted Cook’s video from his @RealDonaldTrump account. The opinion is vague at this point, but it appears that Trump uploaded it directly rather than retweeting the video from a third-party account. Trump’s campaign then retweeted it. Collectively, they caused the manipulated video to be seen 20+M times.

The parents of the boys depicted in the video sued Trump, the campaign, and Cook for violations of New York’s statutory publicity rights, IIED, NIED, and negligence. The court dismisses the lawsuit and says it’s a SLAPP under New York’s newly expanded anti-SLAPP law, but declines to award attorneys’ fees.

Publicity Rights. The court says the manipulated video was newsworthy because it addressed a matter of public concern. “It is common knowledge that one of the principal tactics of Trump’s presidential campaigns, as well as his presidency, was to incessantly attack the mainstream media as purveyors of ‘fake news’, including his claim that the media exaggerates the extent of racial division in this country. Thus, the video’s references to ‘fake news’ and its depiction of race relations, however distorted, are clearly newsworthy.”

Furthermore, because the manipulated video claimed to show “what actually happened,” the court says “any reasonable person watching the video knew, or should have known, that at least a portion of its contents was not real….the video is therefore a satire, albeit one which some may consider to be rather distasteful.”

Finally, the court says the manipulated video wasn’t an advertisement because it didn’t solicit patronage of any particular good or service. I’m fine characterizing the manipulated video as political commentary on a viral video, despite the fact that the Trump campaign effectively used this as a campaign ad.

IIED/NIED. The complaint alleged outrageous, but not extreme, conduct.

SLAPP. “this action involves free speech concerns which are not purely private in nature [but] their claims are supported by a substantial argument for the extension of existing law.”

It’s characteristically disgusting of Trump to coopt innocent two-year-olds to selfishly advance his own narrative. Our leaders should be protecting toddlers, not exploiting them. It compounds the injury that his “lamestream media” story is asinine and has had a devastatingly corrosive and deadly effect on our society.

Nevertheless, I think the court reached the right legal conclusions. Viral videos and related artifacts, like memes and GIFs, are special kinds of cultural assets. People depicted in those materials inherently lose some control over further reuse because they’ve entered our society’s discourse. I’m so glad the parents shared the video initially–it brought a little joy to my life and many others, at a time when all of us needed the lift. However, the inevitable consequences of a viral hit are spoofing, criticism, and remixing–including the remix made by Trump. As much as I’d love to see Trump held accountable for his many transgressions, he was well within his legal rights this time (though, as usual for him, he was well outside any ethical boundaries).

It may sound a little harsh to call the parents’ lawsuit a SLAPP, but it’s not wrong if we’re going to have meaningful anti-SLAPP protections. If anything, the court was generous in not awarding the attorneys’ fee shift. It was great that NY expanded its anti-SLAPP law, but what we really need is a robust federal anti-SLAPP law.

While I support Trump’s right to post the manipulated video, I also support the decisions by the social media services to label it as manipulated video or to remove it altogether as a valid exercise of their own free speech rights. I’ll have more to say about that in my forthcoming paper on online account terminations and content removals.

While blogging this case, I had this early-1970s gem stuck in my head: Three Dog Night, Black and White