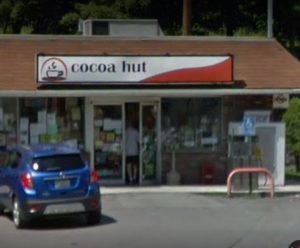 A high school cheerleader, Brandi Levy (referred to as B.L. in the opinion), was disappointed about being placed on the JV squad instead of the varsity squad, as well as developments regarding her softball team. From the local convenience store, the Cocoa Hut (see image), she sent two Snapchat stories to her Snapchat friends (about 250 people). The first was a photo with a friend, both with middle fingers up, captioned “Fuck school fuck softball fuck cheer fuck everything.” The second said “Love how me and [another student] get told we need a year of jv before we make varsity but tha[t] doesn’t matter to anyone else? 🙃”  In response, the school suspended her from the cheerleading squad for a year. She sued the school for First Amendment violations.

given the advent of computer-based learning, we hesitate to determine precisely which of many school-related off-campus activities belong on such a list. Neither do we now know how such a list might vary, depending upon a student’s age, the nature of the school’s off-campus activity, or the impact upon the school itself…

Given the many different kinds of off-campus speech, the different potential school-related and circumstance-specific justifications, and the differing extent to which those justifications may call for First Amendment leeway, we can, as a general matter, say little more than this: Taken together, these three features [discussed below] of much off-campus speech mean that the leeway the First Amendment grants to schools in light of their special characteristics is diminished. We leave for future cases to decide where, when, and how these features mean the speaker’s off-campus location will make the critical difference.

1) “a school, in relation to off-campus speech, will rarely stand in loco parentis…off-campus speech will normally fall within the zone of parental, rather than school-related, responsibility”

2) “courts must be more skeptical of a school’s efforts to regulate off-campus speech, for doing so may mean the student cannot engage in that kind of speech at all. When it comes to political or religious speech that occurs outside school or a school program or activity, the school will have a heavy burden to justify intervention.”

3) “the school itself has an interest in protecting a student’s unpopular expression, especially when the expression takes place off campus. America’s public schools are the nurseries of democracy.”

Applying these features to this case, the majority notes the following facts in the student’s favor:

The majority rejects the school’s purported interests in disciplining her:

It might be tempting to dismiss B. L.’s words as unworthy of the robust First Amendment protections discussed herein. But sometimes it is necessary to protect the superfluous in order to preserve the necessary.

Thus, the majority says the school violated the First Amendment. The court affirms the district court’s award of nominal damages and attorneys’ fees and expungement of the disciplinary record (which should be moot at this point, as Levy graduated high school in 2020).

Justice Alito wrote a concurrence. He summarizes his points of agreement with the majority:

the First Amendment permits public schools to regulate some student speech that does not occur on school premises during the regular school day; this authority is more limited than the authority that schools exercise with respect to on-premises speech; courts should be “skeptical” about the constitutionality of the regulation of off-premises speech; the doctrine of in loco parentis “rarely” applies to off-premises speech; public school students, like all other Americans, have the right to express “unpopular” ideas on public issues, even  when those ideas are expressed in language that some find “‘inappropriate ’” or “‘hurtful’”; public schools have the duty to teach students that freedom of speech, including unpopular speech, is essential to our form of self-government; [and] the Mahanoy Area High School violated B. L.’s First Amendment rights when it punished her for the messages she posted on her own time while away from school premises

He engages with a thought exercise: “Why should enrollment in a public school result in the diminution of a student’s free-speech rights?” Unfortunately, this question is predicated on a false equivalency. A private school could freely discipline a cheerleader for her off-campus speech without running afoul of the First Amendment at all. In other words, the Constitution provides public school students with greater, not diminished, “free speech” rights than their private school peers.

Justice Thomas, standing alone, dissents. As usual, he prefers a rule that leads to more censorship.

Prevalence of this Issue. We’ve blogged about school discipline for students’ online activities dozens of times over the years. Historically, this issue has arisen because school administrators sometimes have an overly thin skin, so they overreact to students who implicitly or explicitly criticize or mock them. Arguably, this case is an example of that.

When I see overreactions like this, I wonder why the school didn’t see this as a pedagogical opportunity. Online venting can hurt students’ short- and long-term reputations and roil the community. The school could have worked with the student to understand these consequences, instead of meting out discipline.

Fortunately, I see fewer overreactions by school administrators now compared to 10-15 years ago. Still, overreactions haven’t gone away. In light of that, this ruling protects millions of teens every day for doing typical teen things online.

What We Know and Don’t Know. The majority sidesteps the critical question of when something is truly “off-campus.” Is the campus defined by its geographic borders? Presumably not, because official school activities take place outside the campus’ geographic perimeter, such as away games and transportation to/from. (Justice Alito’s concurrence gets into this more). The fact that Levy snapped from the Cocoa Hut made this case easier, but many cases aren’t so clean.

This case is also made easier by the fact that the snaps did not make any threat of violence or bully a peer. A more common fact pattern nowadays is a student who, off-campus, posts content online that could be read as a violent threat or personal attack. What should the school do in those circumstances? If the school doesn’t discipline the student, then other students could sue the school administrator for fostering an environment where they feel unsafe. If the school does discipline the student, then it could be a First Amendment violation. We probably don’t pay school administrators enough to navigate these difficult dilemmas.

Despite those many unknowns, this ruling will deter school administrators from disciplining students for online posts made “off-campus.” As the majority said, “courts must be more skeptical of a school’s efforts to regulate off-campus speech.” School administrators will get that message loud and clear.

Emojis Make an Appearance. I believe this is the first Supreme Court opinion to reference emojis (the upside-down smiley). As usual, the opinion doesn’t display the emoji, but still, progress! Note that the Elonis true threats case involved an emoticon that the defendant claimed signaled a joke, but the Supreme Court opinion doesn’t reference or display the emoticon.

BONUS: For years, I have told my Internet Law students that I will give them an automatic A in the course if they get all 26 words of Section 230(c)(1) tattooed in a place I can inspect without losing tenure. I’m now extending that offer to any student who gets a similarly inspectable tattoo of the phrase “Fuck school fuck softball fuck cheer fuck everything.”

NOTE: We only get this ruling due to the courage and financial resiliency of the student and her family. We owe them a debt of gratitude.