A Sure Way to Ruin My Day: The Phrase “Enforceable Browsewrap”–HealthplanCRM v. Avmed

Cavulus is a software licensor. Avmed is the customer/licensee. Avmed decided to migrate from Cavulus to Salesforce, and it asked vendor NTT to help with the data migration. Avmed purportedly sublicensed software access to NTT (as the license allegedly permitted), but the sublicense was allegedly conditioned on NTT clicking on Cavulus’ EULA. Cavulus found out about NTT’s access and initiated an arbitration against Avmed and NTT. The case was remanded to court to decide arbitrability. The court finds the arbitration clause is valid and sends the case back to arbitration.

This is the login screen that NTT confronted: 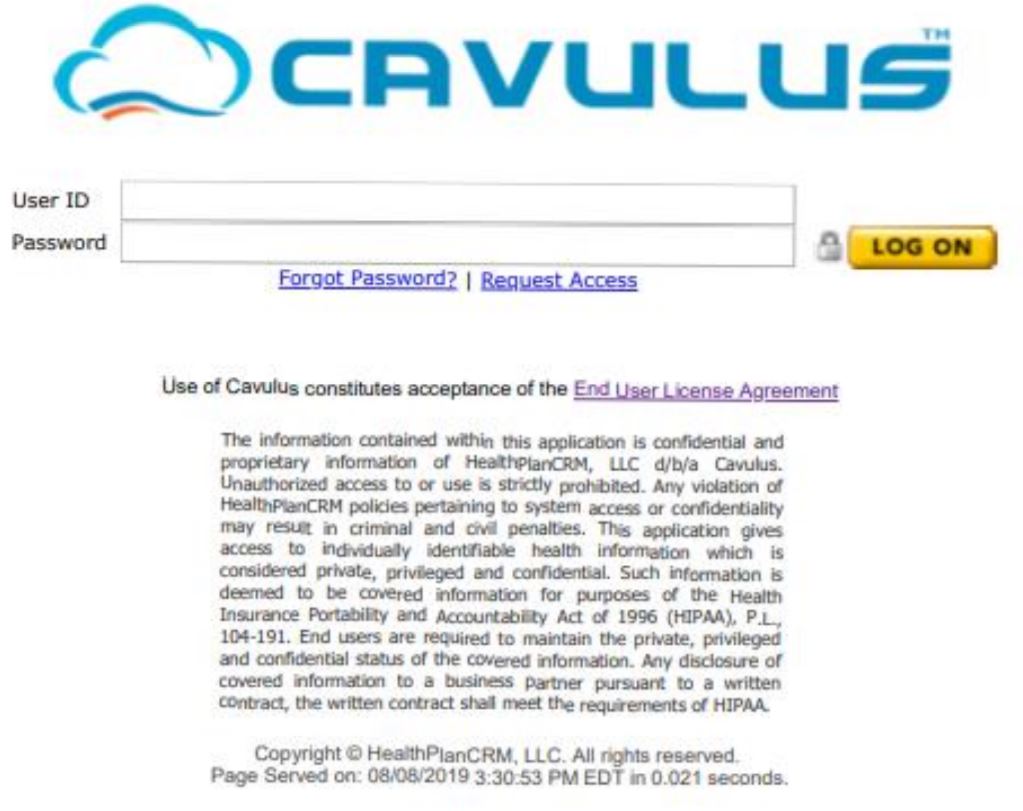 The court concludes: “The link to the End-User Agreement on Cavulus’s log-in page creates an enforceable browsewrap agreement.” 😢😢😢 The court explains:

The log-in page consists of a box to type in a user ID and password and then, about one inch below that box, a sentence reading: “Use of Cavulus constitutes acceptance of the End User License Agreement,” containing a hyperlink to the Agreement itself. This language was displayed every time an NTT employee (or other user) logged on to the software. Cavulus alleges that nine NTT employees logged on more than 75 times, and NTT does not dispute that it performed work for AvMed that required it to access Cavulus’s platform.

The link to the End-User Agreement appears no more than an inch below the log-in boxes, and it is both above and set apart from the “large paragraph” of text NTT references (which is itself only six sentences long). The link is not concealed at the bottom of a webpage or hidden in fine print. What’s more, the blue hyperlink to access the full End-User Agreement stands out against the white background of the log-in page and appears in a sentence which straightforwardly advises the user that “[u]se of Cavulus constitutes acceptance” of the linked agreement.

As if the phrase “enforceable browsewrap” hadn’t done enough damage, the court says:

because the explicit warning that “use” of the software “constitutes acceptance” appears directly below the log-in button, the language arguably functions more like a “clickwrap” agreement than a traditional browsewrap agreement—perhaps falling somewhere between the two. That is, while Cavulus does not ask its users to check an “I Accept” box, as is the case with a typical clickwrap agreement, the placement of an explicit warning directly below a log-in button has a similar psychological effect. And clickwrap agreements are routinely enforced by the courts.

🤮🤮🤮 No. Just no. If you’re going to call a EULA an enforceable browsewrap, then you should own it. Don’t try to hedge your vernacular by saying it’s a clickwrap-like browsewrap. Or here’s a crazy thought…how about never using any -wrap phrase ever again???

NTT also tried to avoid the EULA by saying the NTT employees who logged into Cavulus were individually binding themselves and not NTT as their employer. After several minutes of laugh-cry (ha, ha, ha…wait a minute, did you really just throw your employees under the bus???), the court responds plainly: “Under settled principles of agency law, because NTT’s employees were acting within the scope of their employment, their conduct bound their employer, NTT.”

Still, the court qualifies its statement: “this is not to say that NTT would be bound by every nominally enforceable browsewrap agreement its employees might encounter when they access a website from their work computers.” Unfortunately, the court doesn’t explore this boundary more.

So back to the contract formation. This screen took me back to the software license agreements I drafted in the 1990s. Cavulus’ interface is old-school and could use a freshening-up. When it does bring the interface into the 21st century, Cavulus can make two easy changes. First, the call-to-action could be reworded, such as saying “Logging-on constitutes acceptance of the EULA.” (However, I note a subtle consideration issue as applied to contractors like NTT–if the EULA doesn’t give them permission to access the software, then what consideration does Cavulus give NTT?) Second, Cavulus could put the call-to-action above the log-in credentials fields. Those two changes would have converted the screen to a clickthrough and made this an easier case for judges. Cavulus didn’t need the extra legal help this time, but I also wouldn’t rely on other courts finding “enforceable browsewraps” in future cases.