Emojis are frequently showing up in court cases throughout the United States. As a consequence, according to CNN, “Attorneys are having to argue for different interpretations of the small illustrated characters that are used to express emotions, activities or objects. And courts are struggling to handle the nuances of emojis as evidence.”

Can a person’s sending an emoji be the basis for criminal liability, probably the most important function of a court? If so, which particular emojis have gotten people into trouble?

To answer this question, we turned to Professor Eric Goldman of Santa Clara Law School, who keeps a running list of American judicial opinions – state or federal – that mention emojis. [Here is the list from earlier this year]. As of this writing, there are about 170 such opinions in history, dating back to the first mention of emojis in a court case in 2015. About half of these opinions arose out of criminal prosecutions.

The first thing to note is that kids like emojis, and their casual use of them sometimes conflict with adult standards of good taste.

B.C., an Ohio high school student, adjudicated delinquent of inducing panic. He posted a photo to Snapchat depicting a revolver laying on its side next to an open box of ammunition with the caption, “hoco warm up” with two laughing emojis. The word “hoco” referred to “homecoming.” Matter of B.C., 2019 WL 4303033 (Ohio 2019).

Examples of some other juvenile emoji cases include:

Troublesome emojis are not limited to kids or to sending emojis of guns or bombs or knives. Sometimes, they are emojis that you would expect from romantic relationships, although there trouble starts when these relationships are not mutual or legal. About three dozen opinions involve sexual abuse, and what might be considered “electronic foreplay” in which a sexual predator uses romantic emojis in an attempt to seduce or groom their victims. These cases include state court opinions from:

Sergeant First Class Quantrell L. Anderson of the US Army was court martialed for abusive sexual contact and sentenced to 30 months of confinement. In February 2016, after the Super Bowl, another junior air traffic controller in the unit engaged in a text conversation with Anderson regarding the outcome of the game. After a few messages were exchanged on this topic, Anderson asked her if she wanted “to know a real secret.” Upon her response of “ok,” Anderson sent the message: “When you arrived I wanted to do u,” and this emoji: 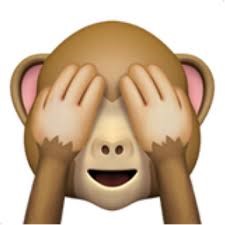 Plenty of adults have gotten into trouble for using emojis in threatening ways. For example:

Sometimes, the emoji is included in the court opinion for a more subtle purpose: showing the defendant’s criminal intent or knowledge.

This was the case of Darnell Lamarr Bryant Bey, charged in Ohio with murder, who posted several gun emojis around the time of the incident, which were presented against him. State v. Bey, 2019 WL 495588 (Ohio 2019).

In a Texas murder case, prosecutors presented evidence that the defendant used his cell phone to take a photo of the victim’s beaten face. He posted, “I hit him a couple times on this one, then f––––d him up even worse,” and he inserted a “grinning emoji.” Crowley v. State, 2018 WL 3580741 (Tex. 2018).

In a federal robbery case out of Kansas, prosecutors presented evidence that, after the robbery, the defendant posted “Can’t wake up broke” on his Facebook page, and included a picture of a hand holding a wad of cash and a number of emojis, including a firearm emoji. United States v. Jefferson, 911 F.3d 1290 (10th Cir. 2018).

In a Michigan federal gang prosecution, prosecutors presented the defendant’s drug and guns emojis. United States v. Dailey, 2017 WL 5664185 (E.D. Mich. 2017). In a Pennsylvania probation violation case, prosecutors presented evidence that the defendant had begun to associate with gang members and made frequent postings on social media platforms regarding his affiliation with gang activity, such as one post in which he said his “gun [emoji] was not broken.” Commonwealth v. Paddy, 2017 WL 2713648 (Pa. 2017).

It is evident that emojis are used as a regular form of communication. So much so that certain emojis have their own commonly known definitions. But as indicated above, the definitions can be dangerous. Even though the use of emojis have appeared in court cases, there is still not a court that has thoroughly interpreted the definitions behind an emoji, as they are used in colloquial conversation. (For example, everyone really knows what the peach emoji references, but there has not been a court opinion that verifies that.)

Emojis hold a lot of power in our society. In fact, in 2016 Apple removed the gun emoji and replaced it with a green squirt gun, following a public campaign. It is now the industry standard and has been adopted by most of the other big tech companies.

Courts have used experts to help interpret emojis. In context, some are self-explanatory. The rat emoji is a well know euphemism for someone, who is well, a rat, or disloyal. Some are more specific to the community or context they are used. For example, in the sex trafficking industry, the crown emoji represents the pimp being the king, and the combination of the high heels and the money bag refers to prostitutes wearing high heels to make money. But without an expert, they could appear as regular and innocent use of emojis.

This could cause larger issues for courts, especially due to the fact that emojis can appear different on multiple platforms and devices. This can lead to confusion and misinterpretation. While emojis appear in almost every area of the law, they are most commonly represented in sexual abuse cases. Courts will struggle with interpretation of this form of non-verbal communication as they continue to be present in everyday conversations.